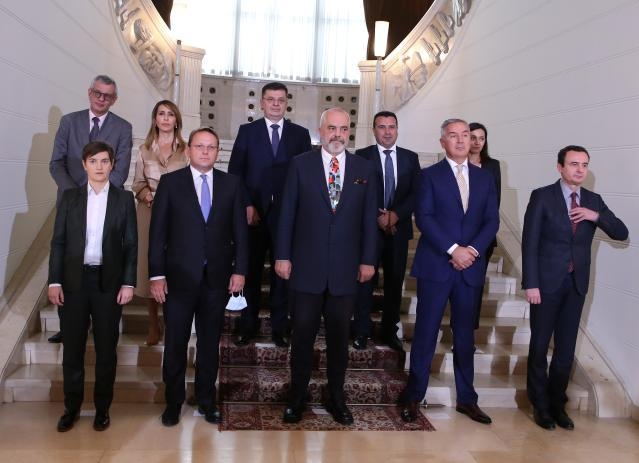 LONDON – The latest results of the survey published by the Balkans in Europe Policy Advisory Group (BiEPAG) paint a negative picture of the European Union’s standing in the public perception of Western Balkans. While most of the citizens of the region still support the EU accession, they are increasingly sceptical that this will happen and the EU is not the most appreciated foreign actor almost anywhere in the region.

These were some of the main points of the BiEAPG publication presented yesterday at a webinar held in cooperation with the Centre for European Reform.

Professor at the University of Peloponnese and BiEPAG member Nikolaos Tzifakis said that, according to the results of the survey, EU was perceived as the biggest trading partner and donor in the region. However, during the pandemic there was a lot of dissatisfaction with Brussels and Serbia managed to leave a greater positive impression on the citizens of North Macedonia, Bosnia and Herzegovina and Montenegro by being quicker in the delivery of vaccines.

Tzifakis said that the European Union was the most appreciated foreign actor in only one country of the region, Montenegro. In Serbia, this is Russia, while in Kosovo and Albania, it is the United States.

“In all the countries other than Albania, EU is seen as a bigger source on fake news than Russia and China, which is a big blow to the credibility of the EU”, Tzifakis said.

Milica Delević, Director of Governance and Political Affairs at the European Bank for Reconstruction and Development, also a BiEPAG member, stressed that the main findings of the survey was the extent to which the EU had lost the PR battle and soft power in the Western Balkans.

She added that an electoral change is not likely to change a geopolitical orientation in the countries of the region, because it has been settled.

“But, people are not passionate anymore. People will continue saying that they support EU membership, but not nearly as passionately as in 1990s and early 2000s”, Delević said.

In Serbia especially, the change of geopolitical orientation is more likely with the ruling party following its already existing pro-Russia and pro-China rhetoric, than opposition coming to power.

Another significant trend is that the position towards China is now a more significant line of polarisation between the supporters of government and opposition in Serbia than the EU, Delević pointed out.

She added, however, that the voters of the ruling parties who have a favourable opinion of the EU often see Viktor Orban and Hungary as its representative.

In Montenegro, on the other hand, the voters of DPS are still the most pro-European, while the overall support for NATO increased during last year.

“I am taking as a sign that this is settled”, Delević said.

The younger generation, she added, will not change the geopolitical course of their countries, but they will be less passionate about the EU.

“It is a quite damning assessment of the EU to see a so small region encircled by the EU, with the EU being the main trading partner, immigration destination, with public opinion being so devoid the passion or reality”, Delević concluded.

Florian Bieber, Professor at the University of Graz an BiEPAG coordinator, said that the region had moved a lot closer to the Turkish scenario in terms of EU enlargement.

“EU accession process is a profound crisis. Without it, I think we would not see a sustained presence of third actors and their exaggerated presence in the public perception”, Bieber said.

He added that the majority of people in the region still support the EU membership, but the increasing number believes it will never happen. He compared this situation with buying a lottery ticket – you might buy it, but you don’t plan your future on it.

“The attitudes of citizens is based on their unfortunately realistic perspectives that the enlargement is in crisis. The process has become unpredictable because of the vetoes. Enlargement process is no longer merit based. There is also a reasonable doubt about Commission’s impartiality”, Bieber said.

He pointed out that, when it comes to the geopolitical influences in the region, it is not about the EU versus the rest, because the Union itself is not monolithic.

Robert Cooper, former Adviser to the EU’s High Representative, said that it would be good to concentrate on policy and not on the opinion polls.

“You change the opinion polls by acting, by doing something. And there are always opportunities if you look for them”, Cooper said.

The question is really for the members of the EU to make up their minds – do they want to enlarge or do they just want to pretend, he said.

“The EU has a choice. I don’t know which way it is going to go. But I think they have made a lot of bad choices”, he emphasised.

On the topic of the public opinion, Milica Delević said that it is the context in which the policy is made.

“The reason why there is the lack of support for enlargement is because the public opinion in the EU is the mirror image of the Western Balkans”, she said.

Florian Bieber added that these numbers show what the authorities want to happen. Government of Serbia wants the citizens to be Eurosceptic because it lifts the pressure off them to implement reforms, he assessed.

When it comes to the issue of what should be done going forward, Bieber said he did not think that there should be alternatives of EU enlargement, because it would be admitting defeat, and that’s exactly what the opponents want.

“There is a discussion on the possible models of enlargement, but political will is crucial”, he concluded.