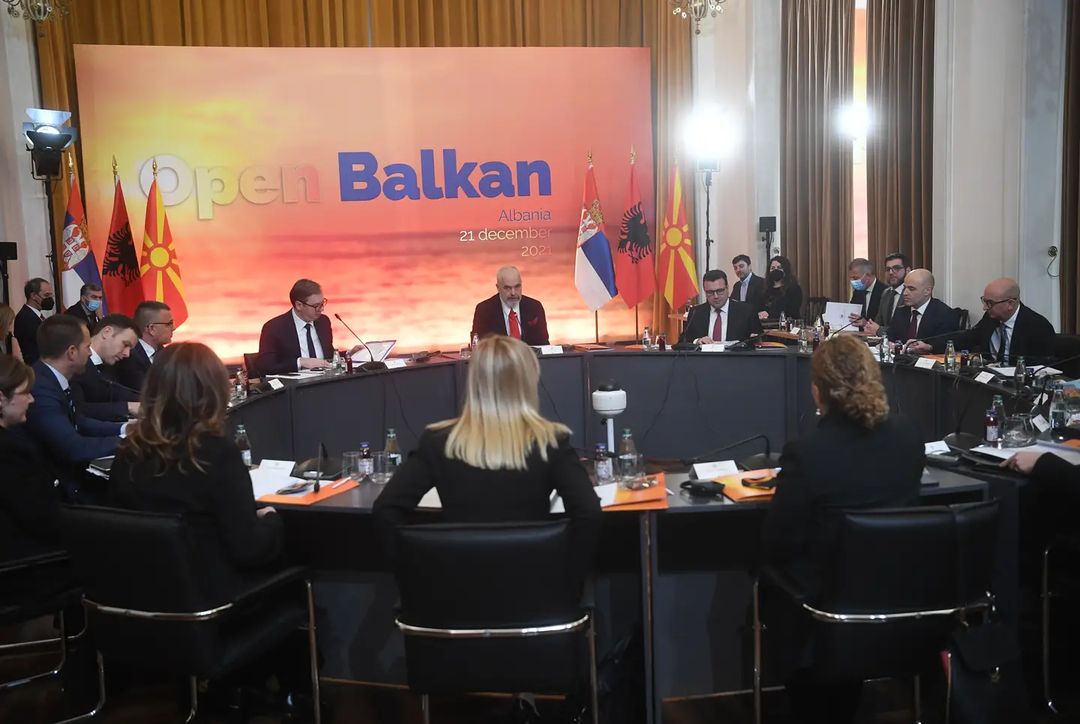 TIRANA / ELBASAN – Prime Minister of Albania Edi Rama hosted President of Serbia Aleksandar Vučić and Prime Minister of North Macedonia Zoran Zaev for a meeting of the Open Balkan initiative in Albania on Monday and Tuesday. The leaders discussed the strategic plan for 2022 and announced the liberalisation of cross-border mobility from January.

Five agreements were signed at the summit, with the special focus being put on the Agreement outlining the conditions for free access to the job market in the Western Balkans which will, according to RTS, enable uniform working permits for all three countries.

Other documents signed include the Agreement on the interconnectivity of schemes of electronic identification for citizens in the Western Balkans and the Agreement between the Council of Ministers of the Republic of Albania, Serbia and North Macedonia for collaboration in the fields of veterinary and food safety.

Serbia and Albania signed an agreement for mutual recognition of the authorisations issued by authorised economic operators, as did North Macedonia and Albania.

“The ‘block agreements’ finally pave the way for all those, who for years have been going from one country to the other for work, like product exporters and importers, and who have a difficult history of long waits. From January 2022, they will be able to freely cross over respective borders and customs”, said Prime Minister of Albania Edi Rama, Euronews Albania reported.

President of Serbia Aleksandar Vučić said that the efforts of Serbia, Albania and North Macedonia to bring benefits to their populations will help with the inclusion of Bosnia and Herzegovina, Montenegro and Kosovo in the initiative, N1 reports.

“This initiative will change the face of the Balkans”, Vučić said after the summit, adding that next meeting of the three leaders will be in Belgrade in May or June.

Prime Minister of North Macedonia, Zoran Zaev, said that it was a great honor for him to be able to directly participate in and contribute to the implementation of the noble mission of the “Open Balkan” initiative on his last day as the Head of Government.

Dimitar Kovachevski, new President of the Social Democratic Union of Macedonia and Zaev’s successor as Prime Minister, was present at all meetings.

“Since the beginning of this initiative, my colleagues, friends and brothers Aleksandar Vučić and Edi Rama have emphasized the fact that the Open Balkans is an authentic process initiated by North Macedonia, Albania and Serbia, created for the benefit of the entire region and open to all countries”, said Zaev.

Vučić, Rama and Zaev also wrote a joint opinion piece which was published by the Frankfurter Allgemeine Zeitung, expressing hope that the new German government would support the initiative.

“Europe is not only a continent, but also a vision. However, the citizens of the Western Balkans, who are a significant part of the continent and that vision, have been excluded and ignored for too long. The desire of our people to be accepted by EU members has been thwarted many times – by the internal policies of the member states, failure to keep promises and fear of the future. This has led to disappointment, instability, emigration and the absence of major investments. As the political leaders of these countries, we can either complain – or do something about it. We have decided on the latter, “reads the article reported by Deutsche Welle.

The three leaders further stated in the text that they signed a preliminary agreement in November 2019 on support for the Berlin Process, by taking responsibility for deepened cooperation in the region.

“Our vision is that by implementing the four European freedoms in our countries, we will overcome social, economic and trade barriers that hinder the economic growth of our region. That is why we have signed agreements that abolish border controls so that goods can pass almost without delay, and which enable our citizens to work unhindered in another country”, Rama, Vučić and Zaev wrote.

For the first time, European Commissioner Olivér Várhelyi participated in the Summit via video link.

“Based on EU rules, any regional cooperation is not only welcome but is also to the benefit of Western Balkans ad the EU. It would be ideal to find a way back to return to Common Regional Market. I invite the other three partners back in the process”, Varhelyi tweeted.

“One third of GDP growth is within reach just by doing the Common Regional Market. Another third, or even more, could come from Economic and Investment Plan for the Western Balkans”, Varhelyi wrote.

On Monday evening, several hundred protestors gathered on Tirana’s main boulevard to protest against the Open Balkan initiative on the day the three leaders involved met in Albania, Exit reported.

The protest was organised by ex-prime minister and president and founder of the Democratic Party Sali Berisha. While it was largely peaceful, a Serbian flag that was hoisted on the boulevard to welcome the foreign leaders was burned.

Zaev: Agreement with Bulgaria will be signed on 1 August in Skopje