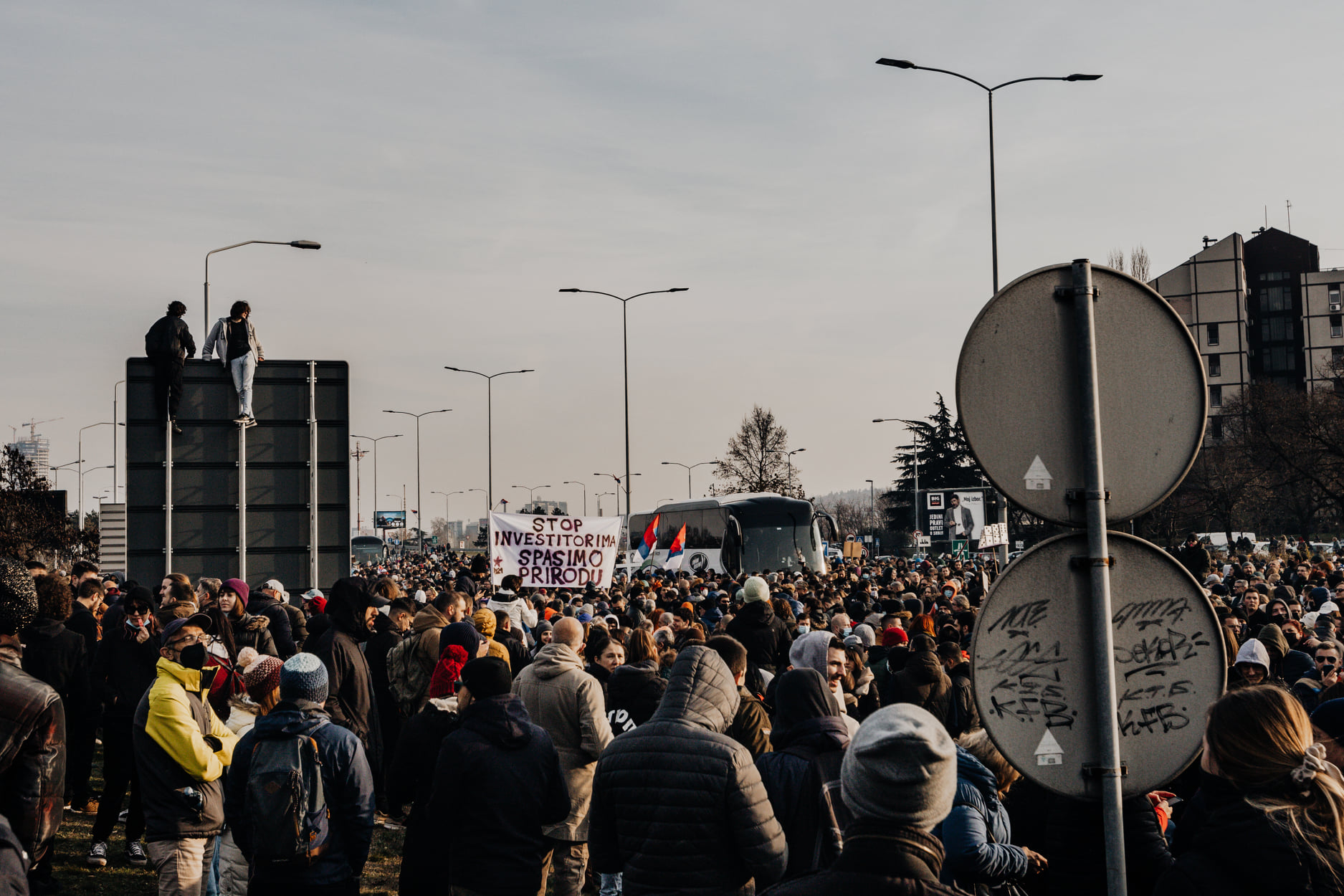 In recent weeks, multiple media outlets have reported that the European Union had labeled the Jadar region in the western part of Serbia as a “sacrificial zone” for its green technology.

According to these narratives, the lithium mine operated by the international company Rio Tinto, which is planned to be built in Jadar region, will provide material for, among other, batteries for electric vehicles industry in the EU. However, there are widespread concerns that the project would be detrimental for the environment of Serbia.

At the same time, recent adoption of two laws seen as connected to the project triggered mass protests across Serbia, with the protesters blocking roads and motorways on 27 November and 4 December. The protests eventually subsided after President Aleksandar Vučić accepted all requests regarding the withdrawal of one of the laws and amendments to the other.

European Commission has since publicly stated that, while the Jadar project can be an economic opportunity for Serbia, the environmental standards must be respected. EC further pointed out for European Western Balkans that its legislative proposal for batteries could make it mandatory for economic operators placing the batteries on EU markets to adopt policy standards tackling potential adverse impact on society and the environment.

Before calling the citizens to protests in November, activists of Serbian “Kreni-Promeni” association protested in front of the EU Delegation in Serbia and symbolically showed yellow cards to the EU representatives in Serbia. The Director of “Kreni-Promeni”  Savo Manojlović stated that “according to all available data, the EU supports the environmentally harmful project” of lithium exploitation in the Jadar Valley area.

A few weeks earlier, Serbian daily Blic published an article with a headline: EU labeled the Jadar region as a “sacrificial zone”! Alarming data of a British NGO on the Rio Tinto project surface.

The article quoted the London-based NGO Corporate Watch, which in turn quoted the “Yes to Life, No to Mining” network, whose blog was the first to mention the phrase “sacrificial zone” in the context of the Jadar project.

“…The push for so called ‘strategic minerals’ (such as lithium) is promoting the notion and practice of ‘sacrificial zones’ where communities and environments are deemed dispensable in order to deliver a greater good”, this “Yes to Life, No to Mining” blog entry reads.

Corporate Watch then went a step further, reminding that, by 2030, the European Commission wants to place at least 30 million electric cars on Europe’s roads.

“In line with the European Union’s green transport agenda promoting electric vehicles, the Jadar region of Serbia, like others in Europe and the Americas, has effectively been marked a ‘sacrifice zone’ for the ‘green’ energy industry”, the article reads.

Following these allegations, Rio Tinto issued a statement that project Jadar is not mentioned in the EU’s green transportation agenda nor any of the EU’s documents. The media outlets, however, continued to make this connection.

The role of European Commission and Germany in the spotlight

On 15 November, Belgrade-based N1 portal published the article Documents show Rio Tinto told EU it has Serbian President’s support in which it released documents handed over by Dragana Đorđević, advisor at the Institute for Chemistry, Technology and Metallurgy in Belgrade.

According to the documents, a study on the environmental impact of the lithium mine project was supposed to have been published in September or October with Rio Tinto officials saying that they expect to get the necessary permits and approvals following Serbian elections in the spring of 2022.

Crucially, Rio Tinto, according to N1, informed the European Commission that it had the political support of Serbian President Aleksandar Vučić to open a lithium mine in the country.

The topic had started to gain increasingly wide attention and the interests of individual Member States, specifically Germany, started to be brought up. Russian government-controlled Russia Today television released a video segment on 21 November continuing the “sacrificial zone” narrative and featuring the joint press conference of recently retired German Chancellor Angela Merkel and President Aleksandar Vučić in September this year.

At the conference, then German Chancellor was asked whether her country was interested in Serbian lithium and, if so, “how persistent it would be in the matter given the big interest expressed by the US and China.”

She added that Germany had a large number of investments in the automotive industry, including in Serbia.

On the other hand, when asked about the sustainability of the lithium exploitation and its impact on the environment, Merkel stated, “I think the EU indeed has good sustainability standards, so it’s not just about German interests, but the matter will surely be addressed by EU members as climate neutrality is a really important issue in the EU”.

What Merkel said was, still, only the position of the German government rather than the EU as a whole. The first official comment of the EU institutions came on 3 December, after N1 television received a written statement from the European Commission Spokesperson Ana Pisonero.

The statement read that “the Jadar project is a very good opportunity for the socio-economic development of Serbia provided it respects the highest environmental standards”.

Pisonero added that the EU also supported Serbia in its efforts to attract EU partners and investments, in order to create sustainable and integrated raw material and battery value chains.

“We welcome the announcement of the Government of Serbia that it will apply the highest standards in environmental protection to this project. EU support to Serbia is conditioned by its regulatory framework and practices, which are fully in line with EU environmental rules, including waste and water management,” she said.

The statement, especially the part on the project being a good development opportunity, was met negatively by the public opposed to Rio Tinto. The day later, citizens continued the blockade of the roads and motorways, demanding the withdrawal of controversial laws.

Following this statement, European Western Balkans requested further clarification from an EU official, who stressed that it is for the national Governments to make decisions on industrial projects and economic opportunities.

It was pointed to our portal that a regulation adopted in December 2020 by the Commission, now in the Council and the Parliament, will require that any company placing on the EU market batteries for electric vehicles will have to comply with the due diligence requirements for the raw materials supply chains, covering all main social and environmental risks, such as risks to air, water, soil and biodiversity.

“These requirements – developed on the basis of the OECD due diligence guidelines – will apply to all batteries placed on the EU market regardless of their origin, including third countries, such as Serbia. We will continue to follow closely the project”, the EU official said.

As of 7 December 2021, the proposed Regulation is still discussed in the Council, with 13 informal videoconferences held to date. The discussions in the Council will continue during the French Presidency.

It was further pointed out for our portal that the Commission published the “EU principles for sustainable raw materials” in September 2021.

“The EU attaches great importance to and advocates for the highest sustainability requirements for all activities related to raw materials, from exploration, through mining, processing and trading to post-closure, in view of minimising the environmental and social footprints of raw material projects”, the EU official said.

The principles published in September, the publication reads, will build upon existing EU legislation concerning sustainability. However, they do not impose any obligations on the Member States or the industry.

Our source concluded with the reminder that initial discussions on a strategic partnership with Serbia on critical raw materials and batteries have started. The partnership is envisaged to be based on three pillars, one of which is the alignment with environmental criteria.

Worries over the impact of Rio Tinto on the environment persist

Another widespread view in Serbia, however, is that it is impossible, with the current technology, to mine lithium in line with the necessary environmental standards.

British The Guardian published a long piece on the Rio Tinto project in November, quoting an assessment of an expert that obtaining lithium will entail a heavy environmental toll, generating 57 million tonnes of waste over the mine’s life of rock material and industrial detritus.

“Such mines are mostly opened in deserts precisely because of the detrimental effect on the environment and biodiversity,” said Dragana Đorđević, who provided N1 with the documents showing that the project has President’s support, to The Guardian.

“The basins of the Drina and Sava rivers, from which about 2.5 million people are supplied with water, are endangered”, Đorđević said. Rio Tinto denied this.

“Last year, the then chief executive resigned after the company deliberately blew up an ancient cave, one of Australia’s most significant archaeological research sites, where there had been evidence of 46,000 years of continual occupation. This summer the company finally agreed, after decades of appeals, to fund an “environmental and human rights impact assessment” of its former copper and goldmine in Panguna, in Papua New Guinea, where it is claimed that 1bn tonnes of mine waste was dumped into the Kawerong-Jaba river delta and continues to wreak catastrophic damage”, The Guardian reported.

On 16 December, Rio Tinto announced that it will continue the Jadar project in accordance to the Serbian laws. The project has become on of the most divisive political issues in Serbia and while commentators expect it to largely be put on halt until the elections of April 2022, the concerns are not expected to go away easily.