European Commission Report on Serbia from October 2021 assessed that, for the first time in several years, there was “limited progress” when it comes to media freedom. Where did that assessment come from and what is the real state of journalism in Serbia?

Vreme interlocutors assess that “limited progress” does not exist and explain that the situation is much worse in practice than one can conclude from this formulation. The media which point out, as the European Commission does, that Serbia is lagging behind in the fight against corruption and organized crime, rule of law, freedom of expression, and the media and the development of the institutions, are under attack.

What influenced the European Commission was the opening of SOS telephone for journalists, the promise of the Ombudsman that a database of attacks and threats towards media will be set up, but the assessment was primarily based on the adoption of the Action Plan for the implementation of the Media Strategy and the formation of Government’s working group for the safety of journalists in accordance with it.

Everything else remained more or less the same. European Commission Report thus notes further attacks of the authorities on professional or independent media, a rise of threats and pressures, refusal of state media to provide requested information, and insufficient independence of the Regulatory Authority for Electronic Media (REM) and Radio Television of Serbia (RTS).

Perhaps the term “limited progress” from the European Commission Report can be accepted if it is based on a silent admission by the authorities that there are serious problems with the media picture in Serbia. Relevant journalists’ associations have been pointing out these problems for many years and they are not unknown to Brussels. This is why the authorities in Belgrade tend to maintain a declarative connection to European integration with its activities.

“Limited progress from the European Commission Report does not exist in practice”, says Željko Bodrožić, President of the Independent Association of Journalists of Serbia. “On the contrary, freedom of expression and equal terms for the work of media are seriously undermined because the ruling Serbian Progressive Party directly or indirectly controls the majority of media, turning them into its propaganda outlets. We are light years away from what European Union considers to be proper media freedoms”.

Milan Ćulibrk, Editor-in-chief of the weekly NIN, agrees with this assessment. He points at the dramatic gap between the practice and different statements of the officials, as well as carefully measured formulations.

“In practice, the state is much worse than what can be gathered from this formulation on limited progress”, Ćulibrk says. “This, however, is also what could be concluded the assessment from the Report that verbal attacks on journalists of the high state officials continue and that the cases of threats and violence remain concerning. That is, of course, related to only a small number of media which tend to do their job professionally, in the public interest, to inform the public objectively and timely on all relevant topics. Unfortunately, the pressures on media have continued to increase throughout 2021, and a further increase is to be expected, especially in the leadup to the Spring 2022 elections”.

“That document was drafted in a transparent and inclusive way,” says the President of NUNS. “It clearly identifies everything that is wrong – and there are many things – but also provides solutions to identified problems.”

But, it would not be the first time that everything remains just a set of good wishes or a window dressing intended for abroad. In 2014, Serbia experienced growth on the international lists of media freedoms due to a set of laws from this sphere of public life, but their actual implementation completely failed. And not only that – the position of the media has dramatically worsened in the following period.

“I am afraid that the Media Strategy and the Action Plan for its implementation will remain just words on paper,” Bodrožić continues. “None of what is happening in public space indicates that the President of Serbia, Aleksandar Vučić, and his Serbian Progressive Party will relinquish control over most of the media. On the contrary, the trampling and humiliation of professional and independent media are increasing. ”

European Commission says in its Report that it is additionally concerned with the political and economic influence on the work of the media, but also its co-financing mechanisms.

“There is no fair competition on the media market of Serbia”, says Ćulibrk. “Pro-government media are abundantly financed with public money – from the budget of Serbia and local self-government – even though they are not supposed to apply for the co-financing since they are violating journalistic standards the most. The analysis of the Journalists’ Association of Serbia has shown that in the first five months of 2020 only four pro-government tabloids – Alo, Kurir, Srpski telegraf and Informer – have received 220,000 Euros of public money, and only in the second half of the last year, they violated the Code of Journalists 3,900 times”.

The authorities and their supporters often say that there are pro-government and opposition media. It is manipulation with two goals. The first one is to create an illusion of media pluralism – here you go, the public has the opportunity to choose who it likes more, the government or the opposition. It is enough to take a superficial look at the current parliament, where only seven MPs do not belong to the ruling majority, to see that it is a ruse.

Namely, the authorities are attempting – and that is the second goal of this fake division – to equate independent and professional media with the opposition parties in order to question their journalistic credibility. How? Well, the biggest part of the extra-parliamentary opposition is subjected to a constant demonization, so the one reporting on their activities cannot be much better himself.

There is one example of where this practice leads. A certain reader called the editorial board of Vreme to protest the fact that we had published his photograph, made with his consent in a public place and used in an affirmative context. The reason for the protest was that our newspaper also featured a picture of Dragan Đilas, President of the Freedom and Justice Party.

Constant attempts to undermine the credibility of independent and professional media is also a clear message to the advertisers.

“In public companies majority-owned by the state, it is strictly forbidden to advertise in professional and independent media”, says Ćulibrk. “Additionally, the government puts pressure on private companies, especially those doing business with the state and public companies not to advertise in critical media. This is why professional print media saw their revenues from advertisements almost completely dry up. This trend was additionally helped by the pandemic, which either way reduced the budgets for the advertisement of the private companies”.

A thorny European path of the media

“We believe that the sole responsibility of the institutions is to create an atmosphere in society that will not tolerate attacks on journalists. The absence of a clear message shows that there is no sincere intention of the institutions to change the catastrophic situation on the Serbian media scene”, reads the statement of these journalist associations.

This decision has not changed even after several calls from partners from the European Union to be reconsidered.

“Many documents of the European Union, including the reports of the European Commission, clearly say that media freedoms in Serbia are seriously endangered,” says Bodrožić. “Year after year, more and more cases of threats, intimidation, and violence against journalists, competitions for co-financing media content have been turned into a mechanism for extracting money for party media, the problem of non-transparency of ownership is still present, regulatory bodies are not doing their job, high state officials are verbally attacking and criminalising independent journalists more and more ruthlessly. However, many European officials here act as if all these conclusions do not exist. I think that is the most discouraging for all those who are fighting for democracy, the rule of law, and free media in Serbia and want our country to become part of the European Union. “

Ćulibrk agrees with Bodrožić. He also points out how different the statements of Serbian officials on the country’s European path differ from their attitude towards the media.

“Serbia is also specific in that these pressures are so strong that some distributors of the press keep critical media – including Vreme and NIN – under the counter and hidden from view, which also affects their sales,” says Ćulibrk. “There is also a known case that the ‘Nikola Tesla’ Airport, while under state control, wanted to ban the sale of the magazines Vreme, NIN and Nedeljnik and the daily Danas. The reason is the criticism of the authorities, which, according to the European Commission, have not made enough progress in many key areas – in the fight against corruption and organized crime, rule of law, freedom of expression, freedom of the media and institution building. ”

Opening of the “green” Cluster – Proof of progress or an undeserved award for Serbia? 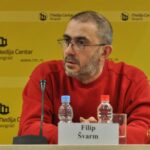