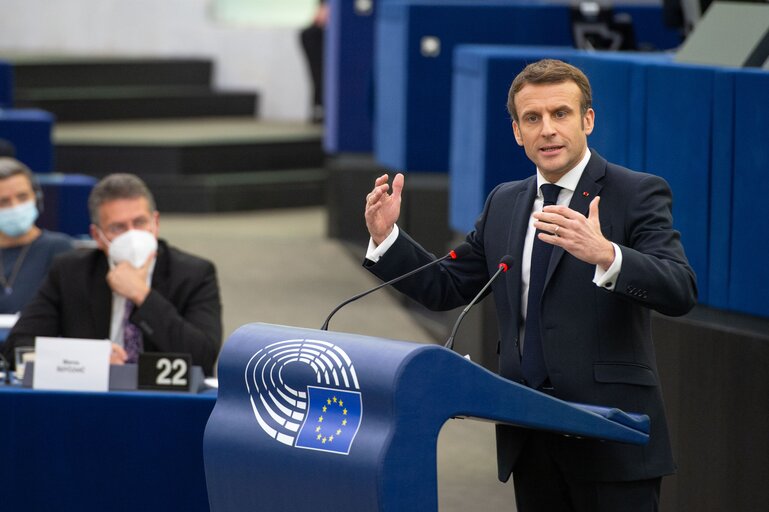 STRASBOURG – President of France Emmanuel Macron focused, among other priorities, on the European perspective of the Western Balkans in his speech at the European Parliament, in which he presented the goals of the French Presidency of the Council of the European Union.

In his speech, the President of France stressed that Europe cannot turn its back to the Western Balkans.

“The Western Balkans are geographically and historically, for their tragic past and a greater future, at the heart of the European continent. They have wounds that show us how fragile peace can be and how strong our Union can be. That is why today we want to think about our relations with Western Balkan countries and give them a clear perspective of accession to the European Union”, Macron said.

He said that this process was not directed against anybody or trying to destabilise anybody else.

“It is a positive accession, which should be carried out in a reasonable timeframe. We have modernised the procedure for negotiations over the last few months”, Macron emphasised, referring to the new accession methodology adopted on the initiative of France.

He, however, repeated his position that the present Europe with its rules cannot become Europe of 31, 32, 33 Member States.

“We would be kidding ourselves if we thought that. So, in the framework of the Conference (on the Future of Europe) and the results expected in May, we need to think about our rules again and make them clearer, make them easier so we can decide more quickly and more easily and also be honest about Europe where the Western Balkans have a place”, President of France said.

He concluded with a call to reevaluate the way Europe works.

Western Balkan region is a part of one of the three priorities of the French Presidency: A more sovereign Europe, which also includes strengthening the Schengen area, protecting European borders, controlling migration and improving the asylum policy.

Other two priorities are A new European model for growth in which economic development is aligned with climate goals, and A humane Europe, with a focus on safeguarding rule of law and European values.