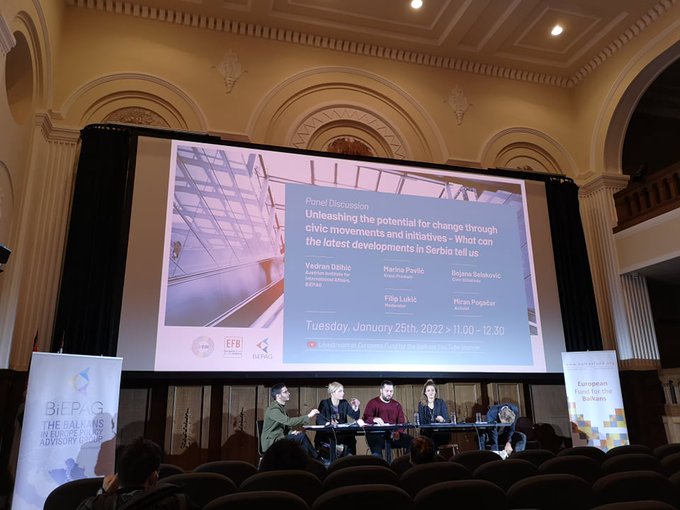 Panel discussion "Unleashing the potential for change through civic movements and initiatives – What can the latest developments in Serbia tell us", Photo: Twitter

BELGRADE – Civic initiatives and protests showed that many citizens in the region are deeply dissatisfied with the lack of accountability of the ruling regimes and ready to actively engage in their societies, it was said during the “Unleashing the potential for change through civic movements and initiatives – What can the latest developments in Serbia tell us”, organized by European Fund for the Balkans (EFB).

The event was the occasion for presenting the new Balkans in Europe Policy Advisory Group’s (BiEPAG) brief about civic movements and initiatives in the region. According to this paper, local civil initiatives and new forms of civic engagement prove to be worthy of further attention for exploring democratization potentials in the region.

“With their focus on tangible and concrete issues that are affecting the daily lives of citizens, they have a high mobilization potential and ability to cut across ethnic divides and enhance citizens’ sense of agency. Even with limited impact achieved of fast dissipation, they nevertheless create a new momentum in the public discourse and collective memory, from which the new opportunity structures emerge for future possible changes”, stated in a BiEPAG’s brief.

The brief stated that grassroots initiatives, in particular, demonstrate the potential of mobilization and a genuine for wider political and social change in the region.

The authors recommended that external actors, such as supportive Eu member states of donors can provide assistance to national and regional cooperation. Offering support and capacity building to social movements as to whether to opt for critical oversight or run for elections will be important for translating the movements’ concerns into lasting change.

Vedran Džihić, a member of BiEPAG from the Austrian Institute for International Affairs (Oiip) and one of the publication’s authors assesses that institutions in the countries of the region have been captured and that the way of making decisions for citizens is often locked. According to Džihić, the interests of small groups and elites are present between the citizens and the state.

He added that the key energy of the citizens, which is reflected in their increasing participation in social movements, should be translated into political change.

“The basic question is how to translate “stop”, “prevent”, and “save” into politics. The next step is to translate energy into political change. Authoritarian equilibrium disappointed expectations in democracy and EU. 31% of citizens believe that only organized action by citizens can bring change”, said Vedran Džihić.

He explains that the rise of transnational far-rights is a threat for the Western Balkans region and EU as well.

“Our BiEPAG brief points out that civic initiatives and movements are the main forces of democratization. After decades of failures for democratic change led by the different actors, be it the EU or the governments, citizens’ mobilization is seen as a key”, said Džihić adding that the region hasn’t yet reached the moment where the EU decides as a single voice.

Bojana Selaković, Programme Director of Civic Initiatives, says that the protests against the authorities in Serbia today are much more complicated than they were in the 1990s, because the government in Serbia now is officially supported by the international community.

Selaković assesses that the last environmental protests in Serbia were protests for the rule of law.

“The environmental protests in Serbia are essentially rule of law protests. There is no trust in the institutions, and trust is an important element for any change”, said Selaković.

She mentioned government in Serbia has attacked the freedom of assembly.

“Freedom of assembly is one of the basic human rights and the people shouldn’t be fined for protesting. During the eco protest, all police stations did the same thing- trying to punish the citizens with traffic fines, which was against the Law on public gatherings. Građanske offered legal support and we will continue to protect civil rights”, says Bojana Selaković.

Marina Pavlić activist from Kreni-Promeni Initiative said that the last protests in Serbia showed that people have power and that citizens need to remind themselves that everything depends on them.

According to Pavlić, the government is scared of too much democracy, but when the government does not act as a service to the people, it is faced with the problem of mass protests and pressure to respond to the requests of the protestor.

“The energy is out there, we just need to channel it. We are done with the narrative that whatever we do everything will stay the same. Institutions are not doing their job, and it shouldn’t be like that, they are being paid, we (the citizens) are paying them and we need to push them to do their job”, says Pavlić.