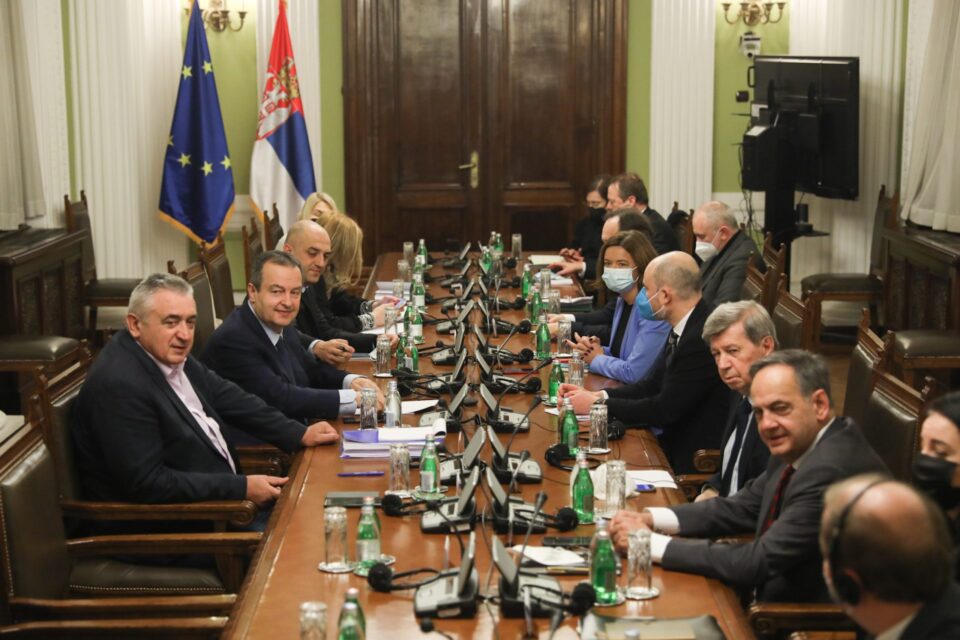 Co-faclitators meeting at the National Assembly of Serbia; Photo: EU Delegation to Serbia

BELGRADE – Co-facilitators of the Inter-Party Dialogue in Serbia, MEPs Vladimír Bilčík and Tanja Fajon and former MEPs Knut Fleckenstein and Eduard Kukan visited Belgrade from 27 to 29 January to monitor the implementation of the 16 measures agreed during their previous visit in September 2021.

The co-facilitators met with the representatives of the ruling and opposition parties, as well as the government officials and members of the Temporary Supervisory Body, which was established as a result of the process.

This was the final visit of the co-facilitators to Serbia before the presidential, parliamentary and local elections called for 3 April.

Opposition parties remained largely critical of the measures, with the coalition around centre-left Freedom and Justice Party (SSP) and centre-right People’s Party (NS), which boycotted the parliamentary and local elections in 2020, refusing to participate in the implementation.

Immediately after the final round of the Dialogue in September, civil society organisations such as CRTA and BIRODI expressed their doubts about whether what was agreed can solve the accumulated problems with electoral conditions in Serbia. MEPs, on the other hand, assessed that the measures, aimed at improving media reporting, voter registry and electoral administration and preventing the abuse of public resources in the campaign, can bring tangible progress.

Some progress made, delays with implementation of measures

In a press conference held on 29 January, European Parliament Rapporteur for Serbia and co-facilitator in the Dialogue, Vladimír Bilčík, stated that all political parties will participate in the elections in April, FoNet agency reported.

“We have always said that the boycott is not the way to go and this is a good step forward for democracy and democratic competition in Serbia,” Bilčík said at a press conference in Belgrade.

After several days of visiting Serbia, he concluded that progress is visible, that 16 measures are there to improve the election conditions, and that European mediators regret that the implementation of some of the measures is delayed.

As he said, it is good that the Temporary Supervisory Body for the monitoring of the media in the campaign is working.

“When it comes to the media scene, it is clear to us that it is still polarized. There is some progress when it comes to public broadcasters – RTS and RTV,” said Bilčík.

He pointed out that the most important thing is that journalists have space to work freely and independently.

“It has always been a priority for European institutions and the parliament, it will be even more important in the election process,” Bilčík said.

Another co-facilitator, former MEP Knut Fleckenstein, said that it was not important whether they were satisfied or not, but that their mission was to find space that everyone could agree on, and that the conclusion on whether this was successful or not will be made by the people to Serbia.

MEP Tanja Fajon stated that she was satisfied with the outcome of the second phase of talks in Belgrade and that the international community would monitor the upcoming elections, adding that it was another test for Serbia, for a better life for citizens, democracy and media freedom.

She also stressed that this was the last time she was visiting Serbia in this capacity, as she was planning on focusing on the politics in Slovenia.

Joint statement: The fact that opposition remains critical to the measures is concerning

The joint statement by the co-facilitators from the European Parliament and Speaker Ivica Dačić, released on 28 January, stated that the Dialogue process, initiated in 2019, had provided an effective platform for exchange and consensus building among different political forces on issues crucial to the future of Serbia’s democracy.

Sixteen concrete measures were agreed in the course of the process, in line with international recommendations, to improve election conditions and the media space. It is regrettable that not all participants of the Dialogue felt they were in a position, for different reasons, to subscribe to these measures.

“It is crucial for all measures to be fully implemented. Any unnecessary delay in implementation endangers the effectiveness of the agreed measures ahead of the upcoming elections”, stressed the European Parliament’s co-facilitators.

“The fact that the non-parliamentary opposition remains critical about implementation of the measures is a matter of concern”, the statement reads.

“Concluding this round of the Inter-Party Dialogue we also want to stress the constructive, open, and to-the-point exchanges we had with all interlocutors and the positive attitude towards dialogue and consensus-building. However, further reform is needed to consolidate Serbia’s parliamentary democracy and we stand ready to support these efforts following the elections”, underlined the European Parliament’s co-facilitators of the Dialogue.