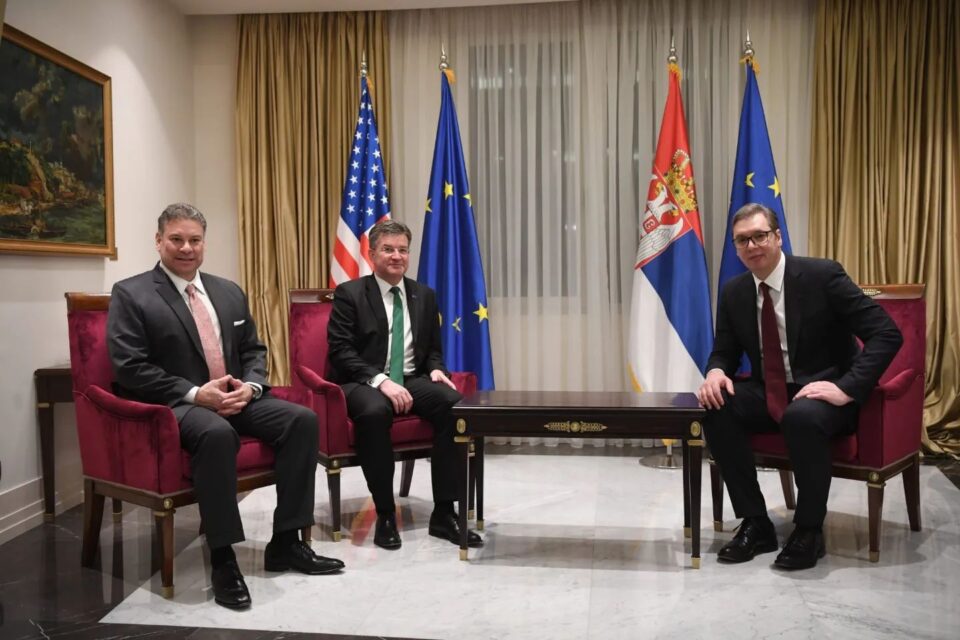 Serbian President with EU and US envoys; Photo: FoNet

BELGRADE / PRISTINA – The Special Representative of the European Union, Miroslav Lajčák, and the American envoy for the Western Balkans, Gabriel Escobar, told reporters on Thursday they said in both Belgrade and Pristina that everything agreed should be fulfilled, FoNet reported.

„Everything that has been agreed must be implemented and will be implemented, and that is part of the process that should take place parallel with the negotiations on the legally binding agreement,“ Lajčák said.

Escobar added that the US position was that the Association of Serb Municipalities (ASM) should be discussed.

„We do not have a vision of how this should be realized, it is on both sides to discuss in a dialogue supported by the EU, but we will support every agreement – politically, financially and technically,“ Escobar told reporters in Belgrade. Asked about the voting of Serbia’s citizens on Kosovo’s territory on April 3, Escobar said that all people in the region should vote openly, freely and easily in elections in which they had the right to vote.

EU envoy assessed that a lot had been done and that he was optimistic before the next round of dialogue between Serbia’s President Aleksandar Vucic and Kosovo’s Prime Minister Albin Kurti.

After visiting Pristina Lajčák and Escobar arrived in Belgrade, where they met with Serbian President Aleksandar Vučić.

Envoys stressed that they support the continuation of the constructive dialogue between Belgrade and Pristina and the integration of the Western Balkans into the EU. They underlined that it is crucial that both sides fulfill all obligations under the dialogue.

Miroslav Lajčák pointed out that the US and EU closely cooperate and share the same vision when it comes to the dialogue process and the future of the entire region in the EU, adding that their efforts are aimed at reaching a comprehensive agreement and implementing all agreements signed so far.

Serbian President Aleksandar Vučić stated that in all signed agreements with Pristina, Serbia acts responsibly and fulfills its obligations, while at the same time, encountering simultaneous attempts by the authorities in Pristina to avoid fulfilling its obligations, which greatly hinders the further course of talks.

Aleksandar Vučić said that Serbia respects Escobar’s and Lajčák’s efforts to stabilize the region, adding that both officials with their pragmatic approach and commitment, make a great contribution to ensuring an atmosphere of neutrality in the region.

In Pristina, Lajčák and Escobar said that the United States and the European Union will not impose any Association model holding executive powers and are not interested in creating the Serbian Republic in Kosovo. In a joint press conference at the end of their three-day visit in Kosovo, Escobar explained that the US does not want to impose a predefined model for the Association, Euronews Albania reported.

“The models shouldn’t undermine the sovereignty of Kosovo. So, we need to find one of these models. They can be found, negotiated and parties can reconcile. This is the scope of the dialogue”, said Escobar. He added that the EU does not intend to impose or pick a model on behalf of the parties involved.

Lajčák maintained that one of the topics discussed with political actors, opposition leaders, and representatives of civil society was the Association of Serb-majority Municipalities. He stated that no one would want to install the Serbian Republic in Kosovo.

“If you want to bring an end to the existence of parallel structures. If you want transparency on money flow and rule of law in the north, that can be done within the legal and constitutional framework of Kosovo”, said the EU Special Envoy.

Prime Minister Albin Kurti said that Kosovo’s territorial integrity and sovereignty cannot be undermined, after hosting a meeting with the EU and US Special Envoys for the dialogue.

“We’re determined in that territorial integrity, sovereignty, and the constitutionality and legality of our state remain undermined at all times from every attempt for the opposite”, Kurti declared. Kurti hinted at Serbia’s discrimination against the Albanian minority in Presevo Valley.

Kosovo’s Prime Minister vowed to increase regional cooperation, but only mentioned the Berlin Process and the Regional Common Market, leaving out the Open Balkan initiative.

Osmani emphasized Kosovo’s commitment to a dialogue centered around reciprocal recognition. She also reiterated a long-held stance that Kosovo’s territorial integrity and sovereignty are out of the table of the discussion. Osmani blamed Serbia for the current stalemate, adding that the latter has also failed to implement the previous agreements.

The two diplomats considered the visit aimed to encourage the Kosovar government to return to the dialogue table as productive. The last time a high-level meeting took place was in July 2021.