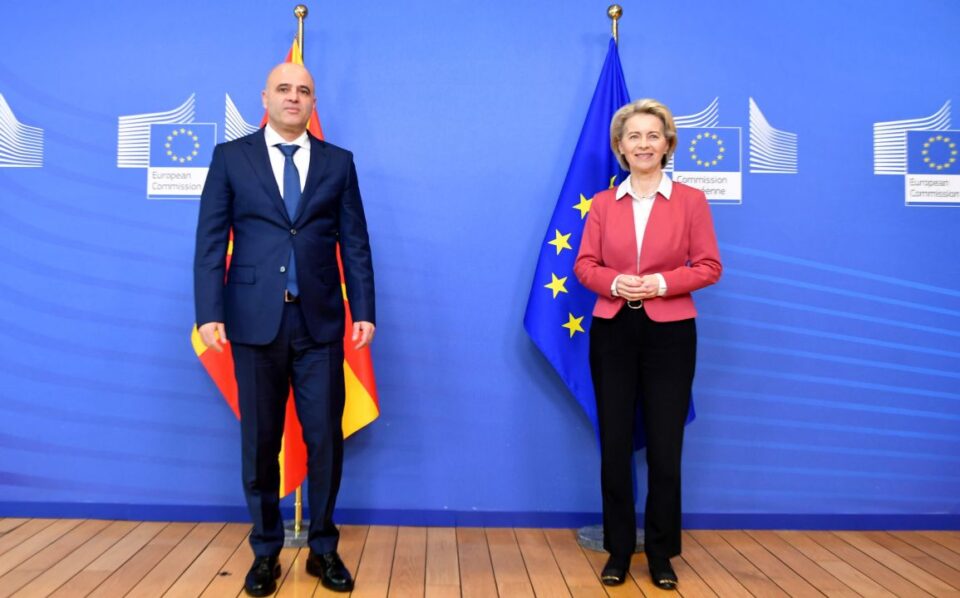 BRUSSELS – The leaders of the EU institutions are unanimous in their support for holding the first intergovernmental conference with North Macedonia to open the chapters without delay, Prime Minister Dimitar Kovačevski said today at the end of his first visit to Brussels since taking office.

“Here in Brussels, I briefed our partners from the European Union on the progress we have made together with Bulgaria in deepening good neighborly cooperation. The commitment of both countries to find solutions and intensify the dialogue is clear and welcoming. Through talks with our friends Charles Michel in the European Council and Roberta Metsola in the European Parliament, the open support for holding the first intergovernmental conference has been confirmed,” Kovačevski said, Sitel reported.

He said that in Brussels everyone is unanimous that North Macedonia should start negotiations for EU membership immediately.

“We are also grateful for the solidarity shown by the European Union during the whole pandemic. Through the crises, we have shown what it means to be European and what it means for North Macedonia to have support in the most difficult moments,” Kovačevski said, welcoming the Economic Investment Plan for the Western Balkans as an important step that would mean the realization of such strategic projects.

At the meeting with European Commission President Ursula von der Layen, Kovačevski said that an agreement was reached to boost bilateral co-operation by setting up five working groups.

Their work is expected to yield concrete results that will be translated into a roadmap that will accelerate the process of holding the first Intergovernmental Conference of North Macedonia with the EU to open the chapters for membership in the Union.

The involvement of the European Commission and the French Presidency of the EU is extremely important in that process, Kovačevski said.

The Prime Minister’s meeting started with a joint press conference with NATO Secretary-General Jens Stoltenberg and that together they reaffirmed unity on Ukraine-related issues, and the need to de-escalate and resolve issues with Russia through diplomacy, because, as he said “We are NATO, and NATO is for peace and dialogue, for security and safety.”

Lajčák and Escobar: All agreed between Belgrade and Pristina must be implemented