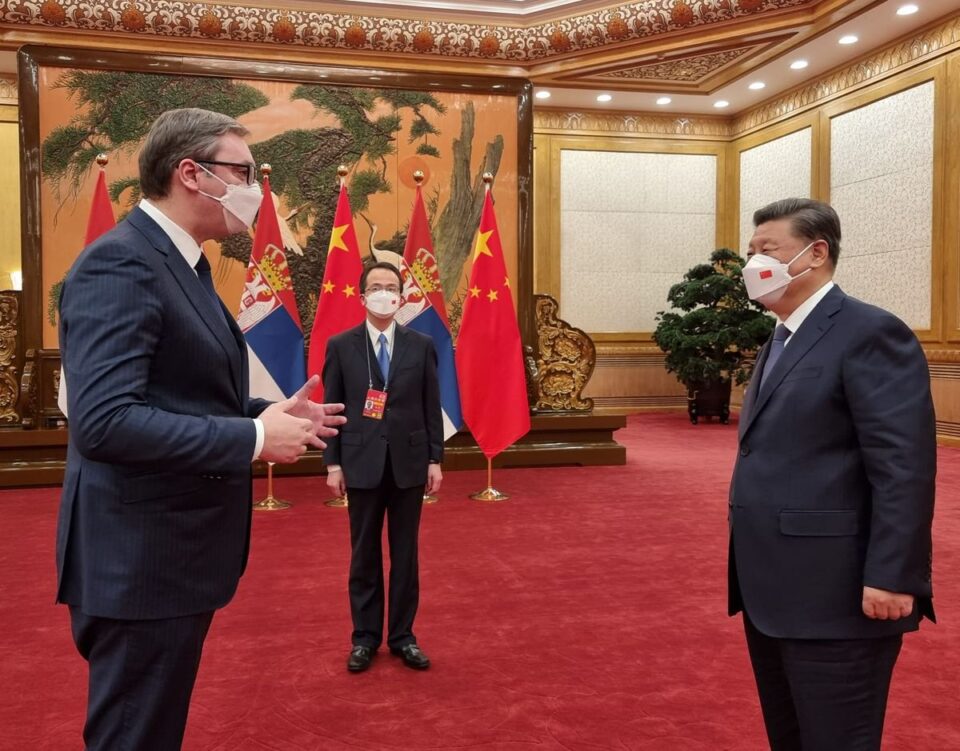 The visit of President of Serbia Aleksandar Vučić to China at the beginning of February has since been made into YouTube add of the ruling Serbian Progressive Party, highlighting the announcement of the Free Trade Agreement between the two countries.

Vučić’s visits abroad, from which he usually arrives with “good news” for Serbia’s economy as well as a strengthened perception of international support for his rule, have become a tradition in the country’s election cycles. This year might be special because China could, for the first time, turn out to be the main foreign destination.

Even before the visit was made into political advertisements, independent media outlets interpreted the announcement of the trade agreement as a part of the election campaign. The fact that presidential, parliamentary, and local elections in Belgrade are scheduled for 3 April, less than two months from the announcement, was the most obvious hint. There was also the fact that other state institutions did not have official information on the agreement at the time Newsmax Adria asked for it on 7 February. This left the impression that the agreement was an ad-hoc political arrangement rather than a carefully planned step of economic policy.

Serious attempts of economic analysis of the agreement highlighted both its positive and negative effects. Pro-government Politika wrote about how the barrier-free trade with China would make Serbia an attractive destination for foreign investors, while government-critical Danas highlighted the threat to domestic manufacturers.

Experts on the European Union also weighed in, reminding that Serbia would have to give up on the agreement once it becomes a Member State. Politika article, on the other hand, stressed that Serbia’s status as a non-EU country is an advantage in this situation, allowing for better trade conditions with China.

The political messaging, however, has been far more prominent than the nuances of Serbia-China trade arrangements. Prime Minister Ana Brnabić set the tone on Twitter, writing that, “with this agreement, the sky is the limit for Serbian economy”. Pro-government tabloids hailed the meetings of Presidents Vučić and Xi as “historic” and the agreement as “great news” on their front pages.

China, thus, became one of the pre-election narratives in Serbia. This is the first time the country has taken such a prominent place in this political context, given the fact that the destination of earlier election-time foreign visits of President Vučić was most often the European Union, specifically Germany.

It all began in 2014, the first time the Serbian Progressive Party won an absolute majority of seats in the parliament. The campaign kicked off shortly after the first EU-Serbia intergovernmental conference in Brussels attended by then Prime Minister Ivica Dačić and First Deputy Prime Minister Aleksandar Vučić, who less than two months afterward led his party to 48% of the vote.

Vučić’s visits abroad in the 2014 campaign were to Dubai, where he attended the presentation of the plan for the Belgrade Waterfront project, which has since become the trademark for SNS rule. Then, just three days before the election, Vučić met with former German Chancellor Helmut Kohl (who died in 2017) in Berlin. According to the press releases, Kohl praised Serbia’s role in maintaining regional stability and discussed the country’s EU integration process with Vučić. Then First Deputy Prime Minister also met with German investors.

It was, of course, another leader of German Christian Democrats, Angela Merkel, who until the end of her political career maintained close and friendly relations with Vučić, which were on display during her farewell visit to Belgrade last September.

Vučić traveled to Germany to meet with Merkel at the crucial points of both the 2017 presidential election and 2018 Belgrade elections. Just like in 2022, elections in the Serbian capital carried much political weight in 2018 despite the fact that the citizens voted for a local parliament.

In 2017, then Prime Minister of Serbia and presidential candidate Vučić visited Merkel three weeks before the end of the campaign, claiming that “many in Germany understand what we have achieved better than us in Serbia”. Regional stability, economic cooperation, and Serbia’s European integration process, just like in 2014, were on the agenda.

The timing of the 2018 visit was even more in synch with the upcoming Belgrade elections, taking place just four days before the voting. During the meeting, Merkel did not spare words of praise for the President of Serbia.

“We are impressed with the way in which Serbia continues on the path of progress in the fight against corruption, and we encourage Serbia to continue on that path,” the Chancellor said at a joint press conference with Vučić.

The proximity of the meeting to the voting day was only comparable to the 2017 presidential campaign when Vučić met with Russian President Vladimir Putin only a week before the vote. Russian support over the issue of Kosovo, investments of Russian companies, and deals with the arms manufacturers were highlighted by the press team of the Serbian ruling party.

It was the first, and so far the only, time that the two leaders met during the campaign, although some other meetings were interpreted in a similar context. Such was the case in November 2021, when an agreement was struck that the price of gas Serbia pays would not change in the following six months, neatly coinciding with the elections in April.

The 2020 parliamentary elections were not marked by President’s visits abroad due to the COVID-19 pandemic. Foreign Minister of Russia Sergey Lavrov visited the country three days before the vote, similar to what he did in 2018. Vučić’s official Twitter account records the remote endorsements of European People’s Party President Donald Tusk ahead of the 2020 parliamentary elections, as well as the visit of the Prime Minister of Hungary Viktor Orbán.

This year marks the first time China is prominently featured in the campaign of Aleksandar Vučić and the Serbian Progressive Party. The relationship between Belgrade and Beijing has deepened significantly over the past two years, with the narrative of “steel friendship”, launched during the first weeks of COVID-19 pandemic being used again during Vučić’s trip at the beginning of February.

With the retirement of Angela Merkel, it remains to be seen whether any other European politician will meet with Vučić in the final weeks of the campaign – not counting Orbán, who is also standing for re-election on the same day, 3 April. If not, this could also be the signal of the shifts in Serbia’s foreign policy which have taken place in recent years.

Support for Ukraine, balancing, ignoring: How the Western Balkans is reacting to the crisis

Brnabić: We will ask EC how many international laws are there