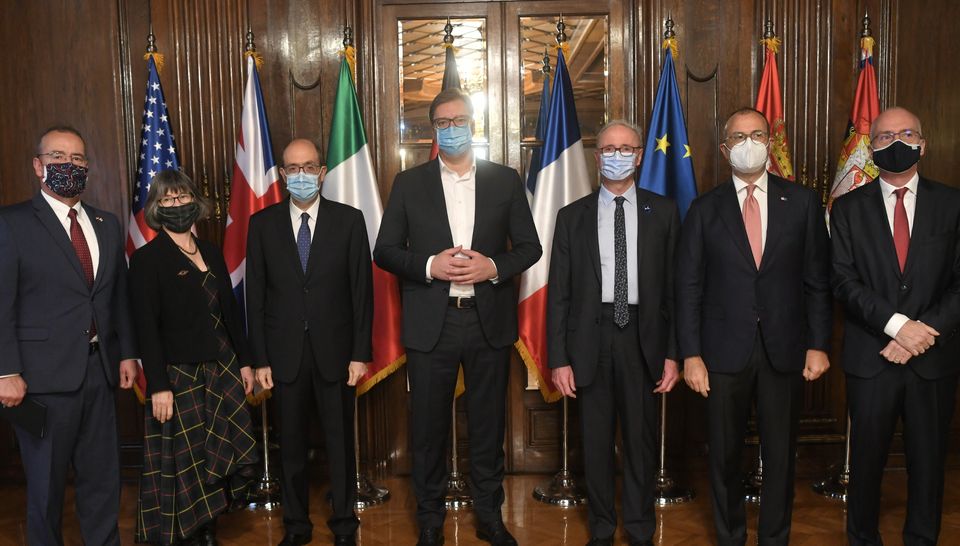 BELGRADE – “Power centers” in the Western countries want “the head of President of Serbia Aleksandar Vučić”, which is why they have started “an offensive” against him through the critical media and the civil society. This is a narrative that has often been used by the pro-government tabloid media, and which was launched once again this month.

On 9 February, tabloid Srpski telegraf published a front-page story on the action “Omča II” (Noose II), accusing the government-critical media, especially daily Danas, of a media offensive against the President and members of his family.

“They are supported by the foreign power centres which have been sabotaging (Serbia) for a long time because the West does not want a strong Serbia, which is capable of procuring the vaccines, of strengthening its economy, protecting and defending its territory”, Srpski telegraf wrote.

The article claimed that the “centres”, which were never specified, want Serbia “on its knees, weak and obedient, (Serbia) which delivers on their requests and ultimatums”. The issues of Kosovo and Republika Srpska, where Vučić allegedly defends the interests of Serbia from the Western pressures, were highlighted.

Media owned by the United Group company, which include Danas and cable television channels N1 and Nova S, as well as “various non-governmental organisations”, were named in the article as the primary channel of the offensive against the President. It never mentioned the specific ways in which “the West” is influencing their work and directing their actions, nor did it ever name a source for its claims.

While it was never directly suggested that the action Noose II has the aim of a physical assassination of the President, the article coincided with the announcement that such assassination plot had been in the making, of which the Government of Serbia was allegedly informed by an unnamed EU Member State in January.

The article was quickly picked up by other pro-government tabloids, which, taken together, have a much higher circulation than other dailies.

This was not the first time that such a narrative was used, as indicated by the title of the operation. According to Srpski telegraf, Noose was first mentioned in June 2019. Then, the same paper, again on the basis of unnamed sources, announced that foreign intelligence agancies had developed a plan aimed at the collapse of Serbia, politically and economically. As part of that action, pro-government tabloids also wrote about the alleged murder of one of the political leaders of the opposition, in order to accuse the President of Serbia, Aleksandar Vučić, of that.

In August 2021, the same tabloid published a front-page “dossier” titled “Western megaphones received millions”, “revealing” how the media and the NGOs have been “denunciating” Serbia for money received from “Western governments, embassies, organizations backed by Rothschild, Rockefeller, Soros, European Commission and various funds for the development of democracy”.

“Make your own conclusion on who is whose megaphone”, reads the article.

The article singled out 15 media outlets and civil society organizations, including the Centre for Research Journalism (CINS), KRIK portal, Centre for Research, Transparency and Accountability (CRTA), European Movement in Serbia, journalists’ associations and other organisations, for their supposedly nefarious connections with the West.

The same narrative was used once again following the environmental protests that took place on 15 February. The protests took place after the National Assembly failed to consider the proposal to put a moratorium on the mining of lithium and borate, which was requested by the protesters. In November and December, several large-scale protests took place in Serbia against the activities of the international mining company Rio Tinto.

The informal leader of the protests, Director of the “Kreni-Promeni” initiative Savo Manojlović, was a subject of a supposedly investigative article of Informer, the country’s largest tabloid newspaper.

The article, published on 17 February, reported that Manojlović’s organisation received 225,000 Euros from the Rockefeller Brothers Found and a German NGO “Kontakt”, financed by “a firm Move on, connected to the infamous American billionaire George Soros”.

“Foreigners are looking for wage earners in Serbia who would do things like this (organise protests) on their behalf. Vučić’s policy of a free and independent Serbia does not suit them and they are looking for someone who would stop it for a handful of dollars”, said Milenko Jovanov, the MP of the ruling Serbian Progressive Party, for the paper.

While Savo Manojlović confirmed last year that the Rockefeller foundation financed an educational project implemented by his organisation, on 17 February Open Society Foundation of Serbia denied that it had supported the activities of Manojlović nor the protests which took place two days earlier.

Earlier this year, Prime Minister Ana Brnabić joined the narrative, stating that the protests were financially backed by the United States, United Kingdom and Germany, which the embassies of these countries denied. Brnabić’s statement was only one example of Serbian Government officials making similar claims.

While the Government of Serbia continues to declare itself as pro-European and maintains cooperation with NATO countries, the pro-government media narratives often remind the readers of the former extreme right-wing anti-Western roots of the ruling party.

Key findings of the 2022 European Commission Report on Montenegro