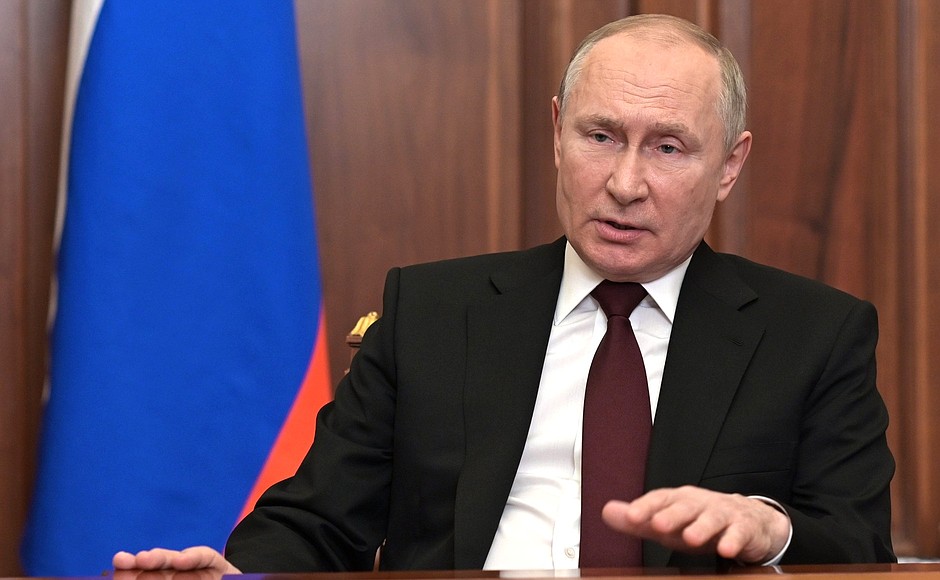 The act has since been condemned by the European Union and NATO member states, who expressed support for Ukrainian territorial integrity and announced a new set of sanctions on Russia.

Officials of the Western Balkans also reacted to the events, with Serbia and Serb leadership in Bosnia and Herzegovina announcing the intention to maintain a degree of neutrality, while other countries of the region joined their NATO allies in condemning the move.

Serbian President Aleksandar Vučić stated last night that Serbia’s position, following Russia’s decision, was not easy and puts it in a situation where there are numerous challenges – political, security, and economic.

Vučić told Pink TV in Monaco that the pressure on Serbia after Putin’s decision will be much greater than ever, that this is destroying the complete security architecture of the world, and that “no one can know who will behave and who will do what”, FoNet reported.

Serbia has not joined the EU in introducing sanctions on Russia following the 2014 annexation of Crimea.

Vučić said that he had already had calls for the so-called “hotline”, but that he had discussed the region with French President Emanuel Macron and that he wanted to hear Serbia’s position.

As he pointed out, it is important for Serbia that in terms of political and security architecture, “our commitment to peace must be strong, and our deterrence force even stronger and stronger” and added that he issued an order to the army and a request to the police to be prepared at all times.

Serb Member of Presidency of BiH Milorad Dodik stated on Tuesday that he hoped for the reduction of tensions, the responsible attitude of the great powers towards the crisis in the relations between Russia and Ukraine, but also the crisis in BiH.

He emphasized that he expects help to reach a peaceful solution in all situations.

Earlier on Monday, Dodik said that the Republika Srpska entity will seek neutrality at the BiH level regarding the issue of Ukraine, Radio Free Europe reports.

Meanwhile, Member of the Presidency Šefik Džaferović condemned Russia’s moves to recognize the independence of Donetsk and Luhansk.

“Bosnia and Herzegovina respects and supports the territorial integrity and sovereignty of Ukraine. I condemn the decision of the Russian Federation to recognize the two Ukrainian regions as states, which is a flagrant violation of international law,” Dzaferovic said, Klix.ba reported.

President of Montenegro Milo Đukanović tweeted last night that the country reiterated its unequivocal support to independence, territorial integrity, and sovereignty of Ukraine within its internationally recognized borders.

“We condemn all acts of recognition of the Donetsk and Luhansk regions as independent entities in violation of international law and international order based on law”, Đukanović tweeted.

Ministry of Foreign Affairs of Montenegro issued a statement that Russia’s decision to recognize self-proclaimed “People’s Republics” of Donetsk and Luhansk is a violation of Ukraine’s sovereignty & territorial integrity, Minsk agreements, and international law.

“Montenegro stands united with the and its NATO allies in support of Ukraine”, the Ministry tweeted.

Minister of Foreign Affairs of North Macedonia Bujar Osmani also condemned the recognition of the areas Donetsk and Lugansk as an independent.

“Such acts represent a severe violation of international law. North Macedonia reiterates its unequivocal support for the sovereignty and territorial integrity of Ukraine”, Osmani wrote on Twitter.

Albanian Representative in the UN Security Council: An agression by fabrication of phantom republics

Ferit Hoxha, Permanent Representative of Albania to the United Nations, spoke yesterday at the meeting of the UN Security Council, of which Albania has been a non-permanent member since January.

Hoxha said that Albania reiterated its firm position in support of the sovereignty and territorial integrity of Ukraine in its internationally recognized borders.

“This is a disrespect not only to the Council and its decisions but for the entire universal principles of international law Russia is set to protect and respect… What happened today is nothing less but a bis repetita of what we have seen in Georgia in 2008 and in Crimea in 2014 – meaning an aggression by fabrication of phantom republics. Who is next?”, he said.

He added that everybody should be aware of the consequences of instrumentalization of minorities as a weapon to undermine sovereign states, threaten regional and international security.