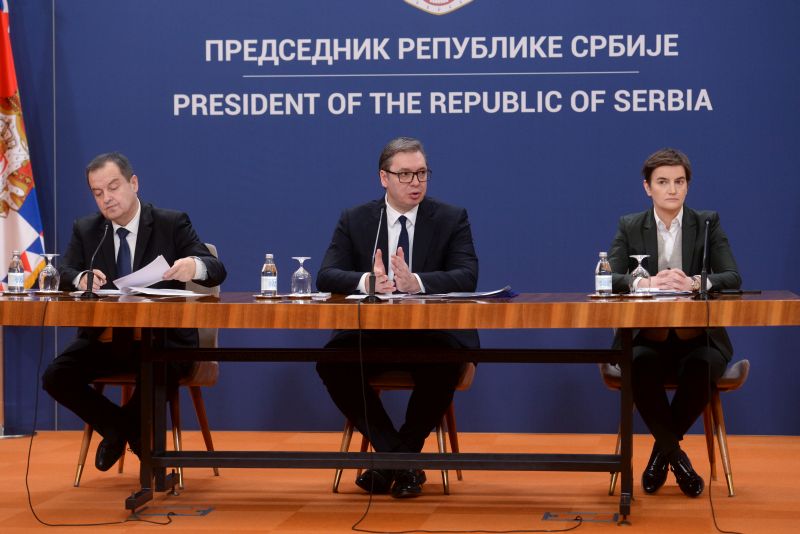 BELGRADE – Serbian President Aleksandar Vučić announced on Friday that official Belgrade will not impose sanctions on Russia over the Ukraine crisis but advocates respect for that country’s territorial integrity.

The National Security Council, which held its session yesterday, adopted a conclusion consisting of 15 points. The eighth point tackled the issue of sanctions on Russia.

“Assuming that its primary duty is to devote all its efforts to preserve the peace and well-being of its citizens, the Republic of Serbia will, when considering the need for possible restrictive measures or sanctions against any state, including the Russian Federation, be guided solely by the protection of its citizens’ vital economic and political interests. As a country that has experienced Western sanctions in the recent past and whose compatriots in Republika Srpska are suffering sanctions today, the Republic of Serbia believes that it is not in its vital political and economic interest to impose sanctions on any country, including its representatives or economic entities”, the point reads.

The conclusions, available on the website of the Government of Serbia, were distributed to diplomatic missions of Serbia and its representatives will be instructed to act according to them.

The conclusion states, among other:

“The Republic of Serbia sincerely regrets everything that is happening in Eastern Europe. Russia and Ukraine have always been friendly states for the Republic of Serbia, and the Serbian people consider Russians and Ukrainians as brotherly nations. We perceive the loss of every person’s life in Ukraine as a real tragedy.

The Republic of Serbia is committed to respecting the principles of territorial integrity and political independence of states, as one of the basic principles of international law contained in the United Nations Charter and the Helsinki Final Act (1975), which guarantees the right of states to inviolability of borders.

The fundamental principle of modern international law is the principle of peaceful settlement of disputes and refraining from the threat and use of armed force against the territorial integrity and political independence of any state and in any manner inconsistent with the Charter of the United Nations. Guided by the basic principles on which it bases its foreign policy, the Republic of Serbia considers it very wrong to violate the territorial integrity of any country, including Ukraine”.

The conclusions also stated that Serbia will immediately stop all planning and exercise activities of the Serbian Army and the Ministry of Interior with foreign partners, that the competent state authorities will take all measures to prevent the participation of the citizens of Serbia in the conflicts in Eastern Europe and that Serbia shall provide all kinds of humanitarian aid to the endangered people and population of Ukraine.