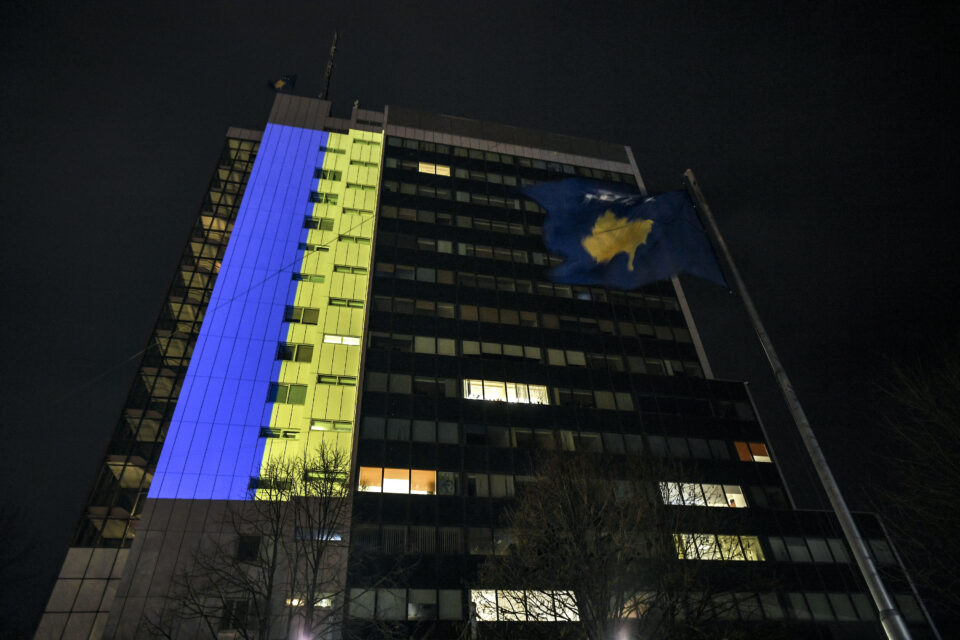 Government of Kosovo lit in the colours of Ukrainian flag; Photo: Twitter / @albinkurti

North Macedonia, Kosovo and Albania have joined the EU and US sanctions on Russia in the last five days, while Montenegro announced an intention to adopt them.

On the other hand, the Serbian Government adopted the conclusions of the National Security Council yesterday, which supported the territorial integrity of Ukraine but refrained from imposing the sanctions. The decision was justified by “vital economic and political interests” of Serbia.

Bosnia and Herzegovina has been unable to reach a common position on the war due to the opposition of Republika Srpska leadership.

“Such statements by Komšić and the behavior of Alkalaj represent their private views, and by no means the views of BiH, which obviously does not have a harmonized foreign policy. BiH’s foreign policy is not and cannot be the policy represented by the SDA (Party of Democratic Action)”, said Dodik yesterday.

Meanwhile, the Minister of Foreign Affairs of Albania Olta Xhaçka unveiled Albania’s sanctions against Russia, which include the freezing of assets and banning Russian aircrafts from entering Albanian airspace, Exit reports.

Albania will freeze the assets of 654 individuals, including President of Russia Vladimir Putin. It will also impose restrictions on Albania’s trade relations with Russia in the fields of finance, energy, technology, and transportation.

Finally, all sports matches against Russia will be annulled, including an upcoming soccer match scheduled for June 2022.

Xhaçka announced that the measures will be presented to Parliament for its vote.

On the same day, the Government of North Macedonia decided to join the recommendations of the EU and the Member States to introduce a ban on entry into the airspace of the country for airlines from the Russian Federation, Telma reported. Humanitarian and emergency flights are excluded from this decision.

Foreign Minister of North Macedonia Bujar Osmani announced on 24 February that the country was joining the latest EU package of sanctions against Russia, adopted on 23 February.

Kosovo decided to impose sanctions on Russia on 25 February.

“I am aware that the EU has adopted a package of sanctions against Russia. In accordance with the procedures, we expect that package to come to us for harmonization in 10-15 days. Bearing in mind that we are neither politically nor militarily neutral – because we are a member of NATO – we will follow what our foreign policy priorities are. We will join the sanctions”, Radulović said.

Várhelyi: Stability of Western Balkans more important than ever