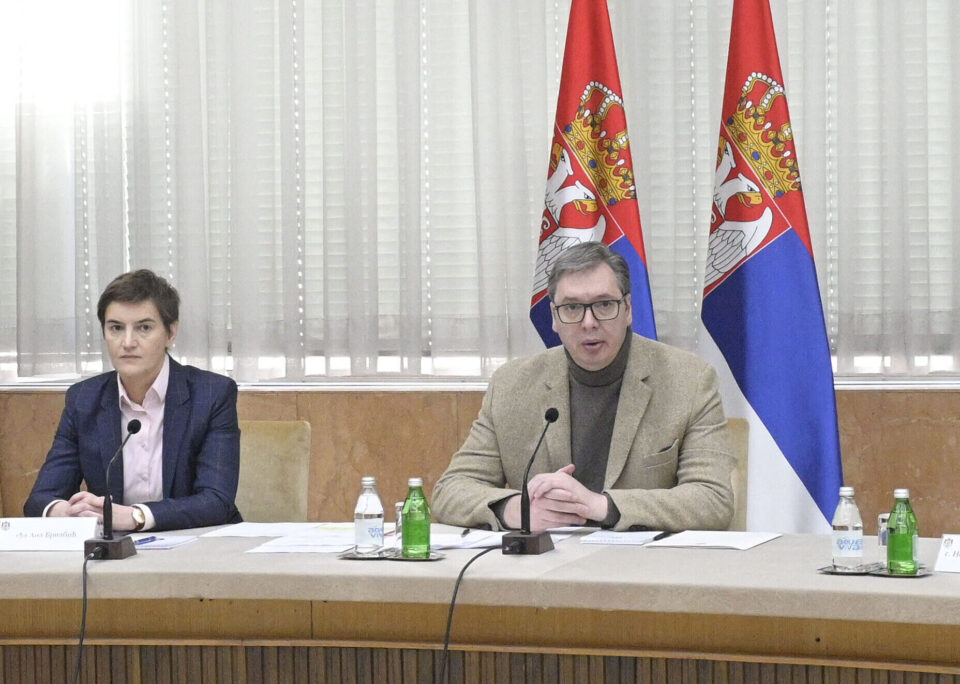 On 25 February, Serbian National Security Council adopted conclusions on the war in Ukraine, though it referred to the conflict as “events in Eastern Europe”. The conclusions expressed support for the territorial integrity of Ukraine but refrained from the imposition of sanctions on Russia.

Serbia has not joined EU sanctions on Russia ever since they were first introduced in March 2014, citing its dependency on Russian gas and Moscow’s support for its position of non-recognition of Kosovo. It remained, together with Bosnia and Herzegovina, the only country in the region not to align or announce its alignment with the newest round of sanctions introduced by the EU.

It seems, however, that the continuation of the policy of balancing will not be seriously challenged, at least publically, either by the United States or the European Union. US Embassy tweeted on Friday evening that it “welcomed the position of Serbia and President Vučić on the support of territorial integrity of Ukraine, which has been violated by an illegal and unprovoked attack”, using stronger language than Serbia in the Council conclusions.

The day before, President Vučić met with the Ambassadors of the United States, United Kingdom, Germany, France and Italy, as well as the EU Ambassador to Serbia, with whom he presumably discussed Serbian position on sanctions.

Several days later, on Monday, European Commission Spokesperson Ana Pisonero stated that the Union expected Serbia to align itself with sanctions. No other official call came from the EU, though Vučić said on Monday that he had been subjected to “great pressures” and that recent days had been the most difficult in his professional career.

Several European politicians and former diplomats, however, have criticised Serbia for its position. Most of the comments were met with a reaction of the Serbian officials and disseminated by pro-government media.

European Parliament Rapporteur for Kosovo and Shadow Rapporteur for Serbia for Greens/EFA group Viola von Cramon tweeted on Friday that it was high time for the Serbian Government and the President of Serbia to publicly condemn the Russian invasion of Ukraine.

“Time of sitting on two chairs is over”, von Cramon wrote at the time when Serbian leadership was taking longer than any other government in Europe to condemn the attack.

It is high time for @SerbianGov and @predsednikrs to publicly condemn the #Russian #invasion in #Ukraine 🇺🇦.

Time of sitting on two chairs is over.

Non-alignment with the whole of #Europe 🇪🇺 on this will put #Serbia in self-isolation. https://t.co/wojB7ymG3L

Serbia subsequently stated that the violation of the territorial integrity of Ukraine was wrong, while President Vučić was also asked to comment on the tweet by the news agency Tanjug during the press conference following the meeting of the National Security Council on 25 February.

“As for Viola von Cramon, I have always tried to be a gentleman, but now I have to tell her to get serious or at least stop talking nonsense, which she does regularly. It is no coincidence that it has become an Albanian icon in Kosovo and an icon of all those who would like to do something against Serbia”, he said.

European Parliament Rapporteur for Serbia Vladimír Bilčík also made his opinion known immediately after the announcement of the decision on not aligning with sanctions on Russia. Unlike the case of Viola von Cramon, Serbian officials have not reacted to Bilčík’s position on the issue.

“Putin’s attack against Ukraine is a watershed moment for the Western Balkans, too. Everyone should therefore understand that Serbia’s choice not to join EU sanctions is a defining foreign policy decision for much broader relations between the EU and Serbia”, Bilčík wrote.

Putin’s attack against Ukraine is a watershed moment for the #WesternBalkans, too. Everyone should therefore understand that #Serbia’s choice not to join #EU sanctions is a defining foreign policy decision for much broader relations between 🇪🇺 and 🇷🇸.

Over the next three days, several commentators, including former diplomats, criticised Serbia for not joining sanctions.

Former Ambassador of the United States of America to Kosovo Philip Kosnett tweeted on Sunday that “Serbia’s Vučić has chosen Putin over the West”.

“While claiming his hands are tied by public opinion and hiding behind the Church. That’s not leadership; it’s moral cowardice”, Kosnett wrote.

So it seems Serbia’s Vucic has chosen Putin over the West – while claiming his hands are tied by public opinion and hiding behind the Church. That’s not leadership; it’s moral cowardice. EU, U.S. please take note.

Both Prime Minister of Serbia Ana Brnabić and Minister of Interior Aleksandar Vulin reacted to this criticism.

“President Vučić didn’t choose Putin over the West, nor does he hide behind anyone, or has ever claimed that “his hands are tied” by anything. He chose international law and principles, Serbian interests and peace. That’s leadership. As for morals-don’t even start”, Brnabić tweeted.

“I know that for Mr Kosnett, morality is a refuge for the weak, but Serbia has always found its strength in moral values. That is why Kosnett attacks President Aleksandar Vučić because he takes care of Serbia and does not lose moral values”, Vulin stated.

Official Serbia also reacted strongly to the comment of former Prime Minister of Sweeden and High Representative in Bosnia and Herzegovina Carl Bildt.

Commenting on a Twitter thread by journalist Michael Martens on Serbia’s refusal to join sanctions on Russia, Bildt wrote that Serbia disqualified itself from the EU accession process.

“With this stance, Serbia de facto disqualified itself from the EU accession process. There should be no room for new EU members not sharing our fundamental values and interests”, Bildt wrote.

With this stance 🇷🇸 de facto disqualified itself from the 🇪🇺 accession process. There should be no room for new 🇪🇺 members not sharing our fundamental values and interests. https://t.co/vw5r5st6Nm

President Aleksandar Vučić reacted to Bildt’s tweet on Monday, describing what he was doing as “taking it out” on Serbia, which “some people” do.

“Since they are not able to take it out on those who are equally strong, they are looking for somebody with whom they can do it. Congratulations to Bilt, he succeeded in life, let him and others continue”, said Vučić.

Bildt’s comment was also followed by headlines such as “He couldn’t wait to attack Serbia” by pro-government tabloid Kurir.

Following the outbreak of the war, the headlines on the front pages of the pro-government newspapers have continued some of the years-long pro-Russian and anti-Western trends in reporting, which were also visible earlier last week.

Sprski telegraf also reported on Friday that “Russian media buzz about Vučić’s statement: The decision of Serbia is the main news in Russia”, also featuring the hug between Vučić and Putin photographed in November last year.

Várhelyi: Stability of Western Balkans more important than ever