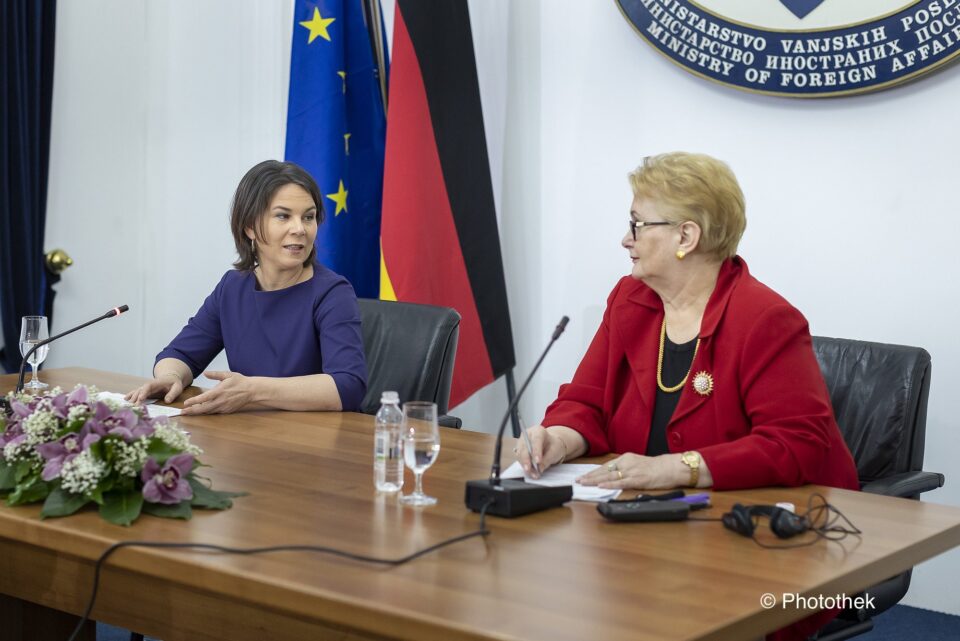 SARAJEVO – Germany will increase its presence in Bosnia and Herzegovina in the future, but will only support those who are committed to strengthening BiH, and not those who are working to destabilize the country said German Foreign Affairs Minister, Annalena Baerbock after meeting with her Bosnian counterpart Sarajevo on Thursday.

She added that images from the war in Ukraine evoke memories of terrible times in BiH and those times are not solely remembered by the people in the region but also by her generation in Germany.

“That is why we must ensure peace in BiH, it is important to us and we must fight against those who threaten it. We will not allow that”, Baerbock added.

Baerbock emphasized that she is well aware that for quite some time the EU and Germany have not been very active players in the region. “We can and want to change that. Therefore, the short visit is just the beginning, many other visits will follow”, said Baerbock.

“You know that the government of the Russian Federation has questioned this position. We want to say that we stand behind him (Schmidt) and that we will help him. Schmidt has unquestionable support of the German Government and Mr. Sarrazin”, Baerbock added.

She underlined that Germany wants this region to become a part of the EU. After Sarajevo, Baerbock will visit Priština and Belgrade.

Milorad Dodik, BiH Presidency member said after the meeting with Baerbock that Republika Srpska has no plans for secession but BiH cannot be built without respect for the entity’s Constitutional position, he also expressed gratitude for her interest in BiH.

Dodik said he thanked Barbock for her interest in the situation in Bosnia and Herzegovina.

“I said that there is a significant political spin aimed at presenting the situation in BiH as unstable, which of course is not true. We talked about EUFOR (the European peace-keeping force), its role in all this, which has our support, and their (EUFOR’s) assessments of security should be respected more, instead of not some misleading political propaganda that comes from Sarajevo mostly,” Dodik said hinting at the fact that EUFOR increased the number of troops from 600 to 1,100, several days ago, bringing in a number of IFV and other transport vehicles.

Speaking about Serbia and Croatia’s interference in BiH’s internal affairs, Dodik categorically rejected such claims adding that a “serious country such as Germany will not accept such frivolous claims.”

Šefik Džaferović, a member of the BiH Presidency pointed out that he expects Germany’s stronger engagement in Bosnia and Herzegovina and the Western Balkans.

“During the meeting, I said that the way out of this situation is to immediately unblock the institutions of BiH, that we must stop constantly threatening the territorial integrity of BiH, that we must stop the procedures diminishing the importance of reforms we have done so far and that all the previous conclusions (in the Republika Srpska entity parliament) must be put out of force,” said Dzaferovic, N1 reported.

Policy Brief: Romania’s enlargement experience shows “how to” and “how not to” build rule of law