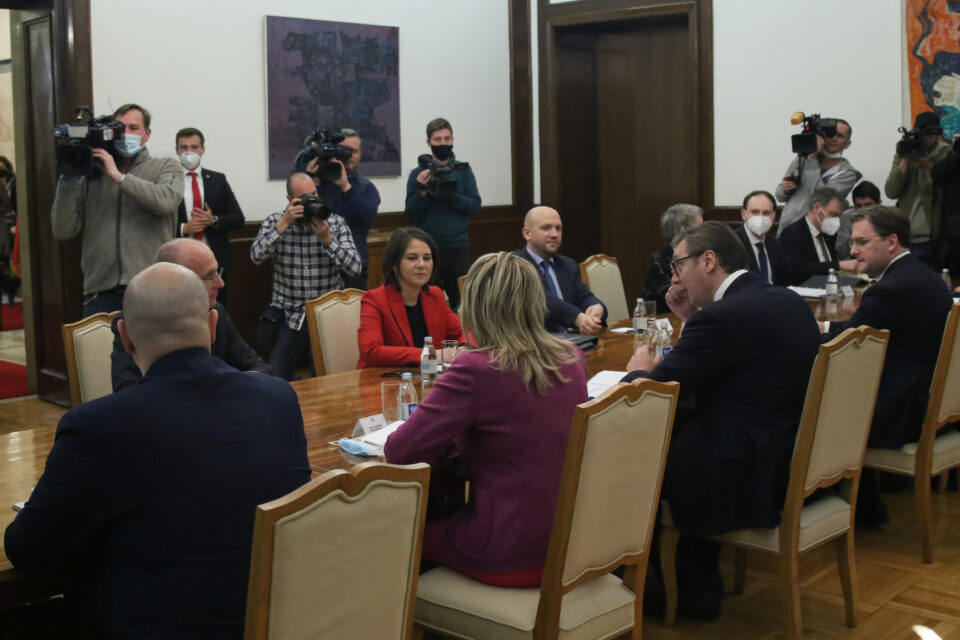 BELGRADE – German Foreign Minister Analena Baerbock, who is on an official visit to the Western Balkans, stated today that Germany wanted to contribute to a comprehensive agreement between Serbia and Kosovo after the elections.

“We see how important our values are for peace, stability, and democracy, for us as Germany it means we must contribute to the region. The central foreign policy priority of the Balkans is clear, we want Serbia to be a full member of the EU, we are convinced that Serbs have the right to live in our common house, that is why reforms in the rule of law are needed, we will sincerely support Serbia,” she said at a press conference following her meeting with President Aleksandar Vučić.

According to N1, she added that Germany will show a greater presence in the Western Balkans.

“We have established the position of a Special Envoy for the Western Balkans, he will be my eyes and ears in the region, he will make sure that the Western Balkans gets the attention it deserves, we are lucky to have a good starting position, we are determined not to stay,” Baerbock said after a meeting with Serbian President Aleksandar Vučić.

She said that the vote of Serbia for the resolution of the UN General Assembly condemning the Russian aggression against Ukraine was “well noted” in Berlin.

Answering the question of whether Vučić conveyed her readiness to distance himself from Russian President Vladimir Putin, Baerbock said that she would not talk about the details of their conversation.

President Vučić pointed out that he discussed the situation in the region with Minister Baerbock, emphasizing that Serbia is consistent in terms of policies that support the preservation of peace and stability in the entire region.

“I spoke unequivocally about respecting the territorial integrity of Bosnia and Herzegovina and the position of the Republika Srpska within Bosnia and Herzegovina. We have different views on relations between Belgrade and Pristina, but we concluded that dialogue should solve problems,” he said.

One of the topics was also the situation in Ukraine.

“Serbia will be and will remain in a position of respect for international public law”, Vučić emphasized, thanking the German Minister of Foreign Affairs for “wanting to hear Serbia’s views.”

Christopher Hill confirmed as the new US Ambassador to Serbia

Balkan Defence Monitor: Serbia biggest spender on defence in the region in terms of GDP

From enlargement to the unification of Europe: Why the EU needs a DG Europe for future Members and Association Countries