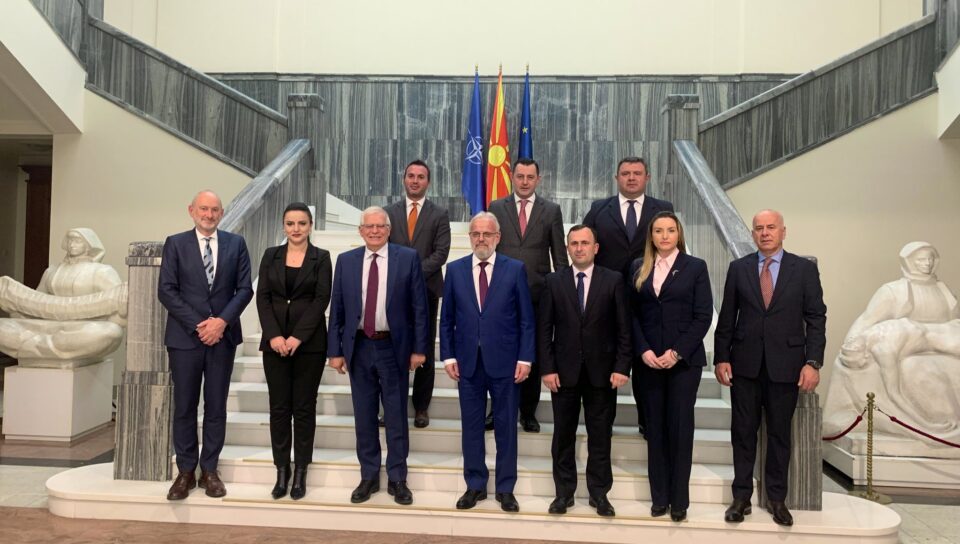 High Representative of the Union for Foreign Affairs and Security Policy Josep Borrell visited Western Balkans this week against the backdrop of the war in Ukraine. The start of accession talks with North Macedonia and Albania is a high priority for the EU, Borrell stressed while visiting the two countries. He also travelled to Bosnia and Herzegovina, where he urged the leaders to end the deadlock of political crisis and progress on the electoral reform.

During the meeting with Prime Minister of North Macedonia Dimirar Kovačevski on Monday, Borrell welcomed the new impetus between Sofia and Skopje for reaching a mutually acceptable solution.

“It is high time to resolve longstanding bilateral issues and start as soon as possible the EU accession negotiations“, he said.

He added that he understands the disappointment that many feel in North Macedonia and reiterated that the start of accession talks between the country and Albania is a high priority for the EU, Sitel reported.

“We constantly assess that the country is ready to start accession talks and it is not a rhetorical statement, it is a firm assessment and commitment and a statement of intent,” said EU High Representative Borrell.

On Tuesday, during his meeting with Prime Minister Edi Rama, the High Representative stressed the strong EU-Albania relations and welcomed the country’s global engagement to preserve international security. He highlighted that it is high time to reinvigorate the enlargement process and integrate Albania and the whole Western Balkans in an irreversible manner into the European Union.

“Albania met all the conditions for opening the accession negotiations and I strongly support, work, engage, and contribute to the start of the accession talks during the French Presidency”, the High Representative said.

Praise for alignment of North Macedonia and Albania with the EU

Borrell praised North Macedonia’s alignment with all EU declarations and sanctions against Russia with Foreign Minister Osmani and expressed gratitude on the country’s contribution to EU missions and operations to Defence Minister Petrovska.

During their meeting, PM of Albani Edi Rama asked Borrell to have the EU include the Western Balkans in the emergency response plan that is being set up in preparation for the impacts of the war in Ukraine.

“If the EU is putting together a response plan for the impacts of the war in Ukraine, then they shouldn’t leave the Western Balkans out as they did with vaccines during the pandemic,” said Rama, Euronews Albania reported.

During his visit to Bosnia and Herzegovina on Wednesday, Borrell met with the leaders of the opposition and the ruling parties of both entities, including the leaders of SDA Bakir Izetbegović, HDZ Dragan Čović, and SNSD Milorad Dodik.

According to Nezavisne, Borrell allegedly demanded from Dodik to stop the transfer of competencies to the entities from the state level, to preserve peace and stability.

Borrell asked BiH to follow the EU’s positions regarding Ukraine, and Dodik said that he would do everything to preserve peace, Bakir said Izetbegović after the meeting.

In the context of the functionality of the election process, he said that the matter had been resolved, but that, as he said, Dodik would probably stop it.

Dodik thanked Borrell for expressing concern over the stalemate in BiH.

“It is not only about Republika Srpska, but also the FBiH, which has neither a government nor electoral reforms. Izetbegović, trying to homogenize his policy, passes the ball to me and the Republika Srpska” said Dodik, RTRS reported.

Borrell started his visit to BiH at the EUFOR Althea Camp Butmir.

“Recently we have decided to deploy the reserve forces of EUFOR. It means than 500 more staff have been recently incorporated into this camp. This is, and has to be understood, as a precautionary measure. As we speak, right now, there are no serious threats to the safety and security in the environment of Bosnia and Herzegovina”, he said.

Starting my visit to #BiH at Camp Butmir @euforbih.

The EU’s commitment to support BiH’s authorities in maintaining a Safe and Secure environment remains unwavering and in the current situation even more important. We have doubled our troop presence on the ground. pic.twitter.com/5jfLi0STtA

“This message of determination and commitment is more necessary than ever, due to the Russian invasion of Ukraine. With this invasion, war is back on European soil. And we are witnessing extreme human suffering, thousands of lives lost, and millions – millions – of refugees fleeing”, Borrell said.

He added that the impact of the war in Ukraine cannot be overrated.

“It will affect our thinking about security, about investments in defence, our resilience, our energy supplies and our food security. The shock waves of the Ukrainian war, of the Ukraine’s invasion, will disturb the world economy and will create problems that go beyond the Ukrainian territory. And this means that also the stability and security of the Western Balkans can be affected, and we consider that more important today – more important than ever”, Borrell said.

Policy Brief: Pressures on judges and prosecutors in BiH decrease trust in the judiciary