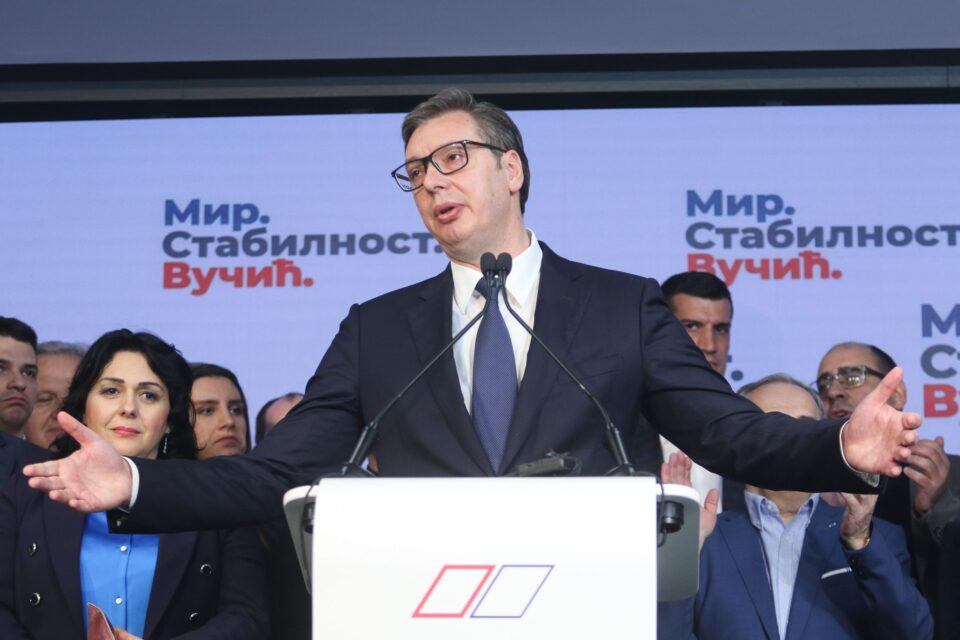 BELGRADE – President of Serbia Aleksandar Vučić was elected for a second term in yesterday’s election, with a lopsided victory of 58%, his nearest challenger Zdravko Ponoš mustering only 18%. However, the Serbian Progressive Party (SNS), led by Vučić, lost its majority in both the National Assembly of Serbia and the capital of Belgrade and will be forced to enter into coalitions with smaller parties.

Vučić was the joint presidential candidate of the SNS coalition, the Socialist Party of Serbia (SPS), and the Alliance of Vojvodina Hungarians (VMSZ), which contributed to his dominant victory of around 2,2 million votes with the turnout expected at around 3,8 million.

In the parliamentary election, however, SNS is projected to win significantly fewer votes, around 1,6 million, which will be its worst result since 2014. It will remain the largest party in the parliament, with 43% of the vote and about 120 seats, but without an overall majority (126), also for the first time since 2014.

A long-time coalition partner of SNS, the Socialist Party of Serbia, led by the current President of the National Assembly Ivica Dačić, is expected to win 11%, thus reversing the trend of the decline in the number of votes in recent years, and significantly improving its 2020 result.

On the election night, Dačić expressed his willingness to continue the cooperation with SNS, which will now need a coalition partner in order to form the next government of Serbia. Negotiations are expected in the coming weeks.

The preliminary results, updated on the website of the Republic Electoral Commission, project a turnout of around 59%, the highest since 2008. In reality, the participation of the voters is even higher, given that the Serbian electoral roll includes a large number of citizens who do not live in the country.

Following the 2020 elections, which saw a boycott of a significant part of the opposition, pluralism is set to return to the Serbian parliament, with five opposition lists crossing the 3% threshold, winning about 85 seats in total.

United for the victory of Serbia, a coalition of center-left Freedom and Justice Party and Democratic Party, center-right People’s Party, and liberal Free Citizens Movement won around 14% and 36 seats. The result is considered a disappointment for the coalition. Some of its members expected more than 20% of the vote in the days leading up to the elections.

Green-left coalition Moramo (“We must”) will also be represented in the parliament with around 4% and 12 seats. The coalition rose to prominence during the protests against the Rio Tinto mining company in late 2021.

Nada (“Hope”), a coalition around the conservative Eurosceptic Democratic Party of Serbia (DSS) won 5% of the vote and 12 seats. Right-wing Dveri will also return to the parliament, while right-wing Zavetnici will enter for the first time, both winning around 3,8% of the vote.

Nada, Dveri and Zavetnici are all strongly pro-Russian and oppose imposing sanctions on Russia and distancing Serbia from Moscow in the wake of the war in Ukraine. They are seen as the main beneficiaries of the topic of the war in Ukraine dominating the election campaign, with Serbian public opinion being much more pro-Russian than in the rest of Europe.

It is yet to be seen how strong opposition Nada, Dveri, and Zavetnici will be to SNS. In the past years, they have been more constructive in their relations with the ruling party. Nada and Zavetnici have not excluded post-electoral cooperation with SNS.

The pro-European opposition primarily set their eyes on the elections in the capital of Belgrade. However, despite a stronger showing than in the rest of the country, it still seems that the ruling SNS-SPS coalition will keep a tight majority of seats in the local assembly.

According to the projection of the Center for Research, Transparency, and Accountability (CRTA), SNS has won 38,1% of the vote in the capital, 7% less than in 2018. SPS slightly improved its 2018 result, winning a projected 6,9%.

The combined percentage will probably be enough for a majority of seats in the local assembly.

United for the victory of Serbia won 21% in Belgrade, while Moramo won 10%, CRTA projects. The threshold was also crossed by Nada, Zavetnici, and Dveri.