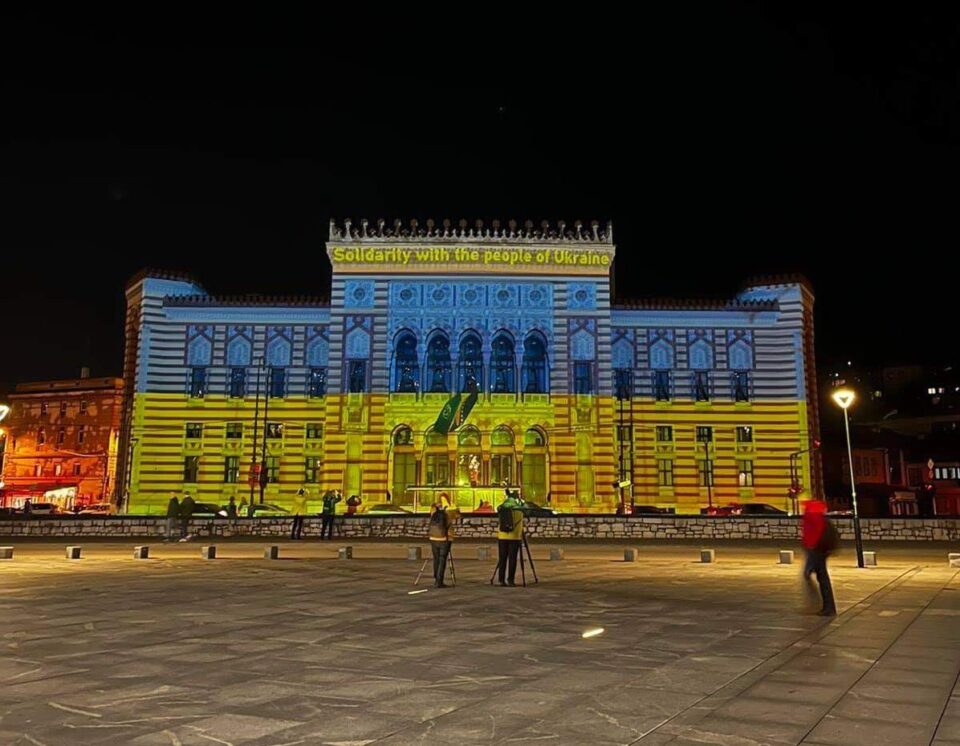 Sarajevo town hall in the colours of Ukrainian flag; Photo: City of Sarajevo

SOFIA – Russian aggression on Ukraine has conjured vivid memories of war in the region and the EU should do its utmost to safeguard the Western Balkans from its negative effects, stressed the participants of today’s conference organised by Euractiv Bulgaria and the Member of the European Parliament Radan Kanev.

MEP Vladimir Bilčik (EPP), Standing Rapporteur for Serbia, said that the war in Ukraine had exaggerated a number of geopolitical changes and such exaggeration processes hadn’t been seen in decades. However, he sees this as an opportunity for the Western Balkans which could bring new dynamics to the EU accession process in the region.

Bilčik emphasized that Bosnia and Herzegovina must be looked at seriously, especially now, with the war in Ukraine raging.

“We must preserve the institutions in the BiH and the Dayton peace accord. There is no other alternative, especially with the Russian aggression in Ukraine”, Bilčik said.

He also added that a way must be found which would loosen the hands of Serbs, Bosniaks, and Croats in their own constituencies and which would consequently make them more inclined to work together.

Igor Novaković, Research Director at the International and Security Affairs Centre, said that the major outcome of Serbian elections is the rise of the right-wing parties and this can be seen as a direct consequence of the narrative pursued by the majority of the media in Serbia.

Serbia has voted against Russia in the UN and has also implemented the sanctions against former Ukrainian president Yanukovich, but this was negatively perceived by the right-wing parties which gained more votes.

“The new government will have no clear Russian factor in it and will likely consist of the ruling party and Hungarian and Bosniak minority parties”, Novaković said.

He expects that Serbia will softly distance itself from Russia in the future and will align with some EU restrictive measures against Russia, but will simultaneously try to persuade the Kremlin that Belgrade is not its enemy.

According to Novaković, there is also a change in the narrative pursued by the majority of the media in Serbia where Vučić isn’t solely pressured by Brussels but by Moscow too. In such circumstances, the Serbian president will try to position himself as a stability factor in the region. Nonetheless, Novaković thinks that Moscow has a vast variety of instruments at its disposal which could destabilize the region.

Since the current ruling party doesn’t have a 2/3 majority in the parliament with which it could change the constitution, he doesn’t expect the final abiding agreement between Belgrade and Pristina could be reached. He also thinks that the EU should put more focus on democracy, rule of law, and freedom of the press in the countries in the region.

Dimitar Bechev, Carnegie Europe, and the Oxford School of Global and Area Studies said that the legacy of war is very vivid in the Western Balkans and the memories of it still remain. He also adds that a real fear that spillover from the war in Ukraine could have a palpable effect on the region is still present and this fear is instrumentalized by some politicians in the region.

According to him, President of Serbia Aleksandar Vučić and Member of Presidency of BiH Milorad Dodik were using the war in Ukraine to summon the images of the past hostilities in the region. He stressed that they are doing so for their own benefits in order to cement their grip on power but they are not interested to actually reenact the war.

“I don’t see a real threat of war in the region and the status quo is being pursued but it’s a double-edged sword that has a negative impact on the lives of citizens in terms of democracy, rule of law, and corruption”, Bechev added.

Bechev believes that European Union should open negotiations with North Macedonia and Albania. He adds that Montenegro will likely join the EU first because it has made the biggest progress out of any other country and the Union also needs a success story. He concluded that democratic problems cannot be solely solved from the top-down but an initiative from citizens is also needed.

Engjellushe Morina, Senior Policy Fellow at the Wider Europe Programme, European Council on Foreign Relations (ECFR), thinks that the Western Balkans is deemed as a region of great importance for the EU and the USA but the EU accession is perceived in the region as a distant process.

“Ukraine is inspiring some autocrats as can be seen in Bosnia and the region should be integrated into the EU and NATO in order to insulate it from the Russian influence”, Morina added.

She has also pointed out that the EU should condemn every assault on democracy and halt its support for the autocrats in the region. On top of that, Morina thinks that the EU should also distance itself from the countries which don’t support democracy and democratic values. She concluded that bilateral issues between countries should be separated from the EU accession process.