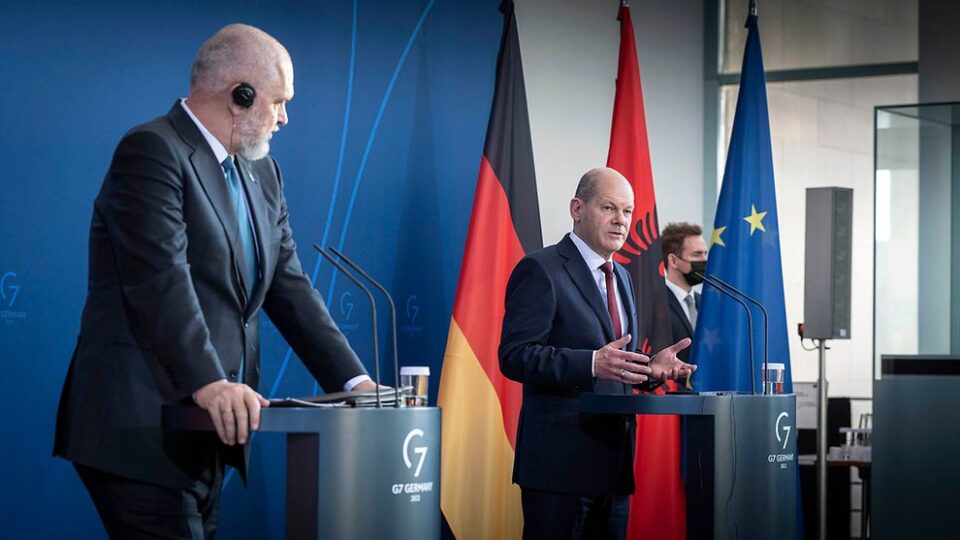 BERLIN – German Chancellor Olaf Scholz reaffirmed on Monday his support for the enlargement process of the Western Balkans during a press conference with Albanian Prime Minister Edi Rama. Scholz said that the integration of the Western Balkans into the European Union was very important, and its realization is one of the biggest tasks of the EU. He

After the meeting with Rama in Berlin, Scholz pointed out that the countries of the Western Balkans are of strategic importance to Germany, and that they are also important for the stability of the region and the whole of Europe.

“Every day we have to work anew to live in an open space of freedom, democracy, the rule of law and prosperity”, Scholz said adding that it is necessary to start the EU accession process for Albania and North Macedonia as soon as possible.

He added that the EU must take care to strengthen and support the Western Balkans because any further delay will make the region more vulnerable and open to third-party influence.

“It strengthens the economy, improves good neighborly relations, and accelerates rapprochement with the European Union. The Berlin Process since 2014 has shown what potential lies in the comprehensive cooperation of the 6 countries of the Western Balkans. I want to revive the Berlin process. Important now are the advances in setting up a common regional market. Establishing and guaranteeing four basic freedoms: the free movement of persons, goods, services and capital is important for the whole region. I personally engage with my government”, said Scholz.

Albanian Prime Minister Edi Rama said that Albania cannot wait any longer for the two neighbors to resolve their quarrel. In addition, he said that Albania’s decoupling from North Macedonia is expected to take place during the month of June.

“To us, the integration process doesn’t imply us going to Europe, but rather to build an Albania with EU standards that work for the future and this is something we owe to no one else but our own children,” said Rama.

He stressed the importance of the Berlin Process for the Western Balkans and assessed that this process “today more than ever needs a new impetus due to a slowdown and a loss”.

“I informed the Chancellor about the Open Balkan, which is nothing more than an attempt to implement the Berlin process, mastering it as a process on a daily basis, and certainly the revitalization of the Berlin Process is the most important thing welcoming and involving all countries in the effort to bring to life in the Balkans the four freedoms of the European Union, the freedom of movement of people, goods, capital and services, is the right thing to guarantee peace, to guarantee regional cooperation and to guarantee the future”, Rama concluded.

Elections in Montenegro: EC to assess the process in the annual report, ODIHR findings important