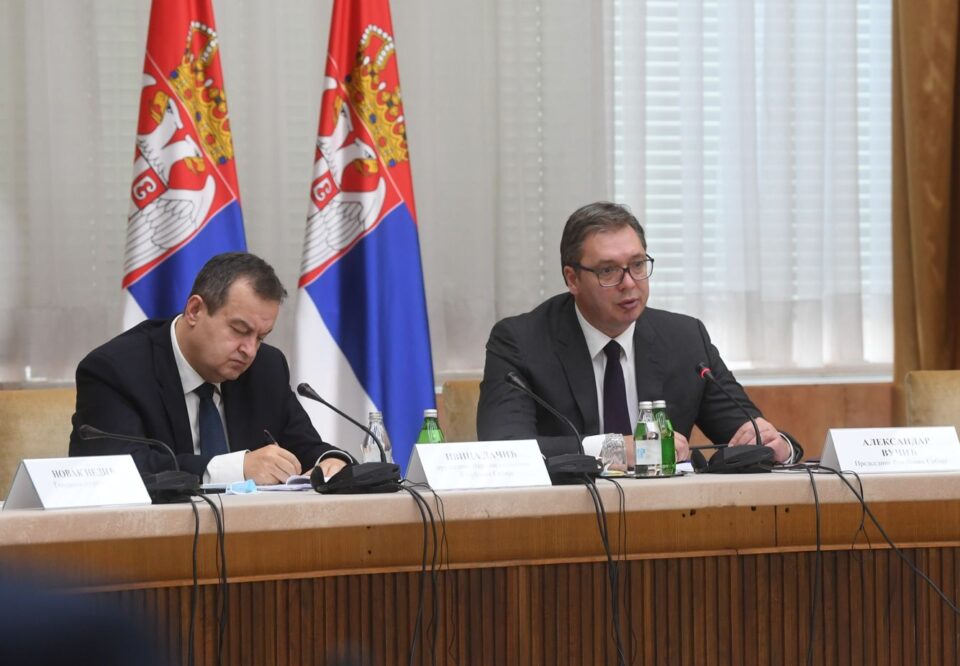 Elections in Serbia on 3 April have created more unpredictability than the results suggest. Even though Aleksandar Vučić dominantly won re-election as President, his party lost the overall majority in both the national parliament and the Belgrade city assembly. The choice of coalition partners is widely expected to be influenced by the most important decision facing the next government – whether it will impose sanctions on Russia.

The coalition gathered around Serbian Progressive Party (SNS), led by Vučić, won 120 seats in the parliament, six short of an overall majority, a situation not seen since 2014. In previous years, Vučić was able to rule without a coalition partner but chose to bring other parties into government. This time, he will be forced to do it.

Before the elections, and the start of the war in Ukraine, a continuation of a coalition with the Socialist Party of Serbia (SPS) seemed certain. Now, other options seem to be on the table as well.

Since the outbreak of the war in Ukraine, Serbia has supported the votes against Russia in the United Nations but has failed to align with EU sanctions on Russia. After the elections, the calls for Vučić to take steps in that direction intensified.

“If you want to become an EU member, and this is what Serbia wants, it is a central issue to support EU Foreign Policy and the corresponding sanctions”, German Foreign Minister Annalena Baerbock said on the sidelines of this week’s Foreign Affairs Council.

The Group of Socialists and Democrats in the European Parliament also called on Vučić, following his election victory, to align to the sanctions as soon as possible. “Otherwise, this will have the consequences for its EU perspective”, the statement, released on 4 April, reads.

Asked by European Western Balkans if he expects Serbia to start aligning itself with the EU sanctions, Srđan Cvijić, Europe’s Futures Fellow of the Institute for Human Sciences (IWM) in Vienna and a member of the Balkans in Europe Policy Advisory Group (BiEPAG), assesses that Aleksandar Vučić will try to prolong the decision as much as possible.

“I believe that President Vučić will use most of the constitutional deadline (approximately four months) to prolong the formation of the new government. This will buy him time not to align with the Western sanctions towards Russia immediately and completely”, Cvijić says.

Eventually, however, the choice of partners will have to be made. For now, at least, few people expect SNS to seek the support of one of the pro-Russian opposition parties, not least because of the negative impression this would make on the international partners.

In the meantime, on 13 April, Zavetnici and Dveri, who together have 20 seats in the parliament, announced the creation of a block against the imposition of sanctions on Russia, which they believe the ruling party is close to imposing.

The important question mark, and possibly the biggest indicator of the future orientation of Serbia, are the relations between the Serbian Progressive Party (SNS) and the Socialist Party of Serbia (SPS), the partners in government for almost a decade.

The former party of Slobodan Milošević, now led by the Speaker of Parliament Ivica Dačić, SPS has been a junior partner in all governments since 2008, having recovered relatively quickly from its fall from power in 2000.

In the process, SPS has reinvented itself several times, accepting, at least on paper, EU membership of Serbia, as well as cooperation with NATO and the Hague Tribunal. It has, however, remained close to Russia. During the campaign, Ivica Dačić repeatedly made it clear that the party was against sanctions.

Aleksandar Vučić was a joint presidential candidate of SNS and SPS, while the two parties ran separately in the parliamentary and local elections. The Socialists defied all expectations on 3 April, when it turned out they had, in fact, increased their share for the first time since 2012, winning 11,5% of the vote.

Despite being considered one of the winners of the election, Ivica Dačić has been almost completely absent from the public since 3 April. Speaking for public broadcaster RTS on 7 April, Aleksandar Vučić said that Dačić had called him “10 or 12 times” since the elections and that they had talked once.

The coalition that seemed almost guaranteed to continue only several months ago is now apparently being re-assessed. On 8 April, Nova portal published an article claiming that Vučić is “purging” the government from pro-Russian members and that Dačić’s position is endangered. According to the article, the Western partners are concerned that SPS would block the sanctions on Russia.

The ties between SPS and Russia are far from symbolic. The party has had control over Serbia’s gas sector since 2008, its high-ranking member Dušan Bajatović serving as Director-General of “Srbijagas”, the state-owned natural gas provider.

Almost the entirety of Serbia’s gas imports are coming from Russia, and there are concerns that SPS would be a hindrance to the diversification of energy sources, which might also be expected from Serbia in the future, not least because of the alleged financial benefits received by SPS from their arrangements with Russian Gazprom.

Our interlocutors still believe that, faced with the possibility of losing power, SPS will be pragmatic.

Dušan Spasojević, Associate Professor at the Faculty of Political Science, University of Belgrade, emphasises that SPS, at one point, distanced itself from Milošević, and therefore, it can “temporarily” distance itself from Vladimir Putin as well.

He believes that the SNS is still aiming to maintain somewhat of a balance between the West and Russia, which will leave the space for SPS to remain in the government as well.

“SNS is now negotiating with the West over what would be acceptable, what is a minimum Serbia must meet (in terms of sanctions), and then with Russia also, what is acceptable to them… There is a similar dynamic on the level of government formation – through this process, the ruling party is trying to diminish the negotiating position of the SPS”, Spasojević says.

Srđan Cvijić also believes that an arrangement can be achieved.

“Let’s not fool ourselves, any Serbian government, including the one with SPS, could and would impose sanctions on Russia, the only question is how much will the declaratively pro-Russian parties such as the Socialists, ask in return to be part of that government”, he says.

Nevertheless, Cvijić points out that SNS can form the government even without SPS, thanks to the traditional partners among the national minority parties, particularly the Alliance of Vojvodina Hungarians (VMSZ).

If he chooses to cooperate only with the minority parties, Vučić could, according to the preliminary results, secure the necessary 126 votes.

“In this case, however, he will have a weaker majority and will be exposed to ruthless criticism in the parliament, from left and right”, Cvijić points out.

What complicates the situation even further is that excluding SPS from the government on the national level would probably imply the loss of power in the capital of Belgrade, where SNS, also according to the preliminary results, cannot form a ruling majority without the Socialists.

Dušan Spasojević does not believe that it is likely for SNS and SPS to form a coalition only in Belgrade and not on the national level.

“That scenario would be quite unusual. There should probably then be an agreement on a relatively quick parliamentary election, for example, so that the Socialists could return to the government. So, it doesn’t seem very realistic to me”, Spasojević says.

The problem for SNS, he adds, is that they do not have other alternatives.

Even this assumption, however, is being questioned in Serbia these days, illustrating a sudden rise in the unpredictability of Serbian politics.

The unthinkable: Is cooperation with pro-EU opposition possible?

On 11 April, the leader of the opposition Freedom and Justice Party (SSP), and the former mayor of Belgrade Dragan Đilas visited the Presidency of Serbia to meet with Aleksandar Vučić and discuss the possible repeat of the Belgrade election.

The situation is considered to be a minor political earthquake, given the fact that the political scene in Serbia has been strongly polarised in recent years, with SNS on the one side and coalitions of SSP and other parties on the other exchanging accusations of involvement in high-level corruption and organised crime. Đilas in particular has for years been the most vilified public figure by the pro-government media and SNS members.

Several days after the elections, however, Đilas publicly stated that he was ready to talk with Vučić about the situation in Belgrade, which Vučić soon accepted. At the same time, pro-SNS media started treating Đilas as a legitimate interlocutor, having previously described him as a thief and a criminal.

In the wake of the elections, Đilas has claimed that SNS and SPS do not have 56 seats in the Belgrade assembly, as the current results suggest, but only 55, one short of the overall majority. A repeat of the vote at some polling stations, due to irregularities, is expected in the coming days.

If SNS and SPS turn out to have only 55 seats, cooperation with one of the pro-Russian opposition parties will most likely be necessary. Such a coalition, Đilas claims, would be illegitimate. He, therefore, proposes a snap election in Belgrade by the end of the year.

Đilas and Vučić met in the Presidency of Serbia to discuss the issue on 11 April, and the SNS leader announced he would let the position of his party known by the end of this week.

Some, however, are interpreting the meeting differently and putting it into a wider context.

“Only the naive ones think that Vučić and Đilas will discuss the issue of Belgrade today… The warming of the relations between them has only to do with the order from the West to both of them that Serbia needs to impose sanctions on Russia”, tweeted Boško Obradović, leader of the pro-Russian Dveri, on 11 April.

Even though Aleksandar Vučić and Serbian Progressive Party have the numbers to impose sanctions on Russia on their own, the theory that the warming of the relations between Vučić and Đilas has something to do with sharing the responsibility of taking this unpopular step in Serbia is widely discussed at the moment.

Đilas has, however, excluded the possibility of entering the government with SNS on any level. Srđan Cvijić agrees that a coalition with any of the pro-European opposition is impossible.

“I believe that such a coalition remains politically impossible. Entering a government with Vučić’s party of them would be interpreted by their voters as a pact with the “devil” and would thus be equal to political suicide”, he points out.

Almost all pro-European opposition parties have distanced themselves from Đilas’s meeting with Vučić. In the meantime, the media warming has also been limited exclusively to Dragan Đilas, while pro-government media continued to attack and smear other members of the opposition after the elections.

Serbia might be at the beginning of a new phase in the country’s politics, or perhaps the detente between Vučić and Đilas turns out to be short-lived, while SNS and SPS form yet another coalition. Whatever happens, the unpredictability of Serbian politics has not been so high in years.