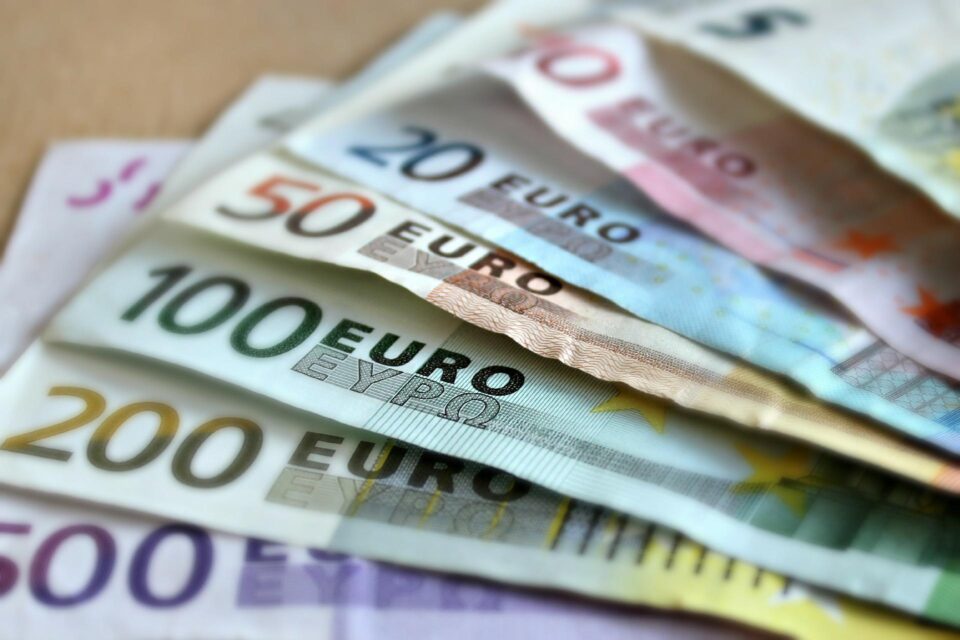 Although there were some minor improvements in 2021, in comparison to 2019, the anti-corruption progress of the Western Balkans that was noted in the first 10 or 15 years of monitoring corruption pressure and corruption involvement has been halted or even reversed in the last few years.

At the same time, the acceptability of corruption declines, but still, it remains very high, as well as susceptibility to corruption. Most of the citizens of the Western Balkans seem to have lost hope in the feasibility of fighting corruption which points to a very deep lack of trust in the government.

These are the results from the 2021 SELDI Corruption Monitoring System (CMS).

Alexander Gerganov, Senior Analyst at the Center for Study of Democracy/SELDI Knowledge and Outreach, and Assistant Professor at the Institute Philosophy and Sociology at the Bulgarian Academy of Science explains that the CMS methodology is based on the idea of stable measurement showing progress or digress in corruption of countries perceived.

“The idea was to show what the actual facts are, to show them in a very simple way to understand, and to provide comparison both across countries and over time,” he says.

Although at the time, the main way to approach corruption measurement was through perception-based indicators, Gerganov points out that due to the problems related to this kind of research, they decided to add attitudes to the perceptions and, most importantly, experienced-based indicators.

Experience with corruption in the WB remains high

“Experience with corruption (or corruption victimisation) is the most important pillar in the CMS since it provides actual incidence rates of corruption pressure and involvement in corruption in the Western Balkans,” notes Gerganov. In 2021, these levels remained high in the region, and way above the average of the rest of the EU countries.

Among Western Balkans, in 2021, Albania exhibited the worst results, both in corruption pressure (which represents the percentage of people who have been asked for a bribe), and in corruption involvement (which represents the percentage of people that have given a bribe). On the other hand, Serbia remained the country with the lowest corruption pressure in the region, while Kosovo had the lower rates of corruption involvement. 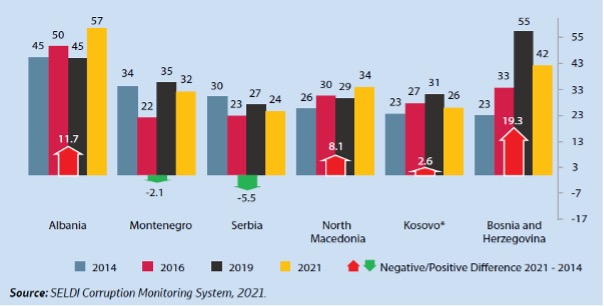 People do not like corruption, yet they are willing to take part in it

Although one might be expecting higher levels of acceptability of corruption, since the corruption pressure and involvement remained high during previous years, CMS 2021 data showed the opposite – the percentage of the population who find various forms of corruption behavior acceptable declined.

Bosnia and Herzegovina remained the only exception to this trend, with the levels of acceptability very high between 2016 and 2021. However, in 2021, the acceptability was the highest in Albania, while the best result had Kosovo.

When it comes to susceptibility, the situation is different – it remains very high despite a modest decline since 2014 in most countries. The highest level was noted in Albania, while the lowest was achieved by North Macedonia and Montenegro.

As Gerganov explained, these results show people in the region do not accept corruption practices as normal. Yet, on the other hand, they are willing to participate in it if the situation requires it.

“Even if people do not approve of this, even if people do not think that this is the way to do things nowadays, they still do not see any choice for themselves, and if the situation requires it – and it requires it very often, then they are willing to take part in this,” emphasises Gerganov, adding that the experiences in corruption are not the product of the culture or of people wanting to participate in it, yet they are the results of having no choice.

Distrust of the citizens in their governments’ capabilities to fight corruption

The third group of indicators, the perception-based index, includes expectations about corruption pressure (which reflects the likelihood of being pressured by the government official into bribing) and perceptions of the feasibility of policy responses to corruption.

The CMS 2021 results show that, when asked about their estimate of the likelihood of being pressured into bribing, the public in the region is apprehensive. Kosovo, Albania, Serbia, and Montenegro marked a decline in these expectations since the mid-2010s, but all of them still have more than 50% of the population that expects to be asked to bribe. At the same time, citizens of North Macedonia and Bosnia and Herzegovina perceive corruption pressure to be more likely now than between 2014 and 2016.

“While the perceptions of the likelihood of corruption pressure show some improvement in four of the six countries, the CMS results for 2021 reveal great doubts of the citizens that corruption can be reduced substantially,” states the policy brief.

In all countries, except in Serbia – where “only” 47% of the people believe that corruption can be reduced, more than half of the citizens have lost hope in the feasibility of policy response. These results demonstrate the crisis of the citizens’ trust in the governments and their capabilities to enforce rule of law and reveal the deep vulnerabilities of the political systems of the countries in the region to foreign malign influence.

“This is why we always insist on having experience-based data. When it is possible of course. Because perceptions of likelihood are very much dependent on many things, including media,” Gerganov says, adding that this could be problematic, especially nowadays, when there is so much disinformation in the media and when we talk about media capture all the time.

However, when interpreting the results, “a difference should be made by the administrative corruption, measured through the CMS and the state capture phenomenon, measured with the State Capture Assessment Diagnostic (SCAD) tool,” which has shown that although none of the Western Balkan countries is close to full state capture, they exhibit critical impairments in democratic and economic checks and balances.

In general, the 2021 CMS results confirmed the need for stronger incentives for reforms, more stringent monitoring of EU and national funds’ distribution, as well as for sanctioning rule of law violations.

According to Gerganov, important conditions in tackling corruption represent transparency and work with civil society and other independent organisations.

“What can be done is more transparency, in terms of more easily available company data or asset declarations data in an electronic machine-readable format. Also, detailed machine-readable data on public procurement. This can be used by academics, NGOs, scholars in the field and investigative journalists to find problems and to show problems of high-level corruption,” Gerganov notes.

“Talking about CSOs – cooperation between public organisations and CSOs is very important, particularly in the sense of independent assessment of anti-corruption policies. Many countries are doing this now themselves. However, it is much preferable if independent organisations do this and have these reports and the outcomes of these assessments published, available for everyone,” Gerganov concludes.