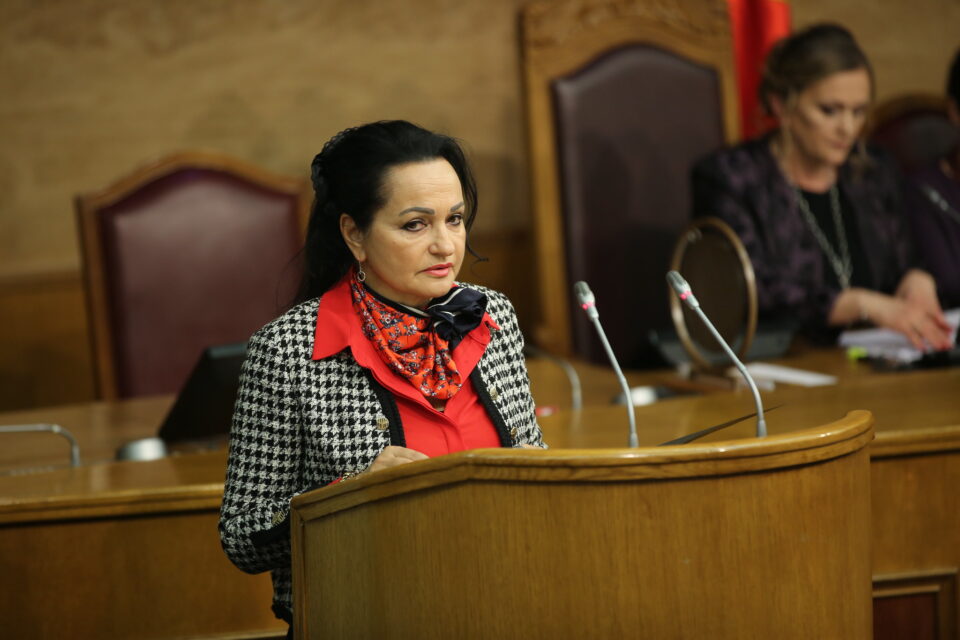 A few days ago, the news of the arrest of the former President of the Supreme Court of Montenegro, Vesna Medenica, made shockwaves in the public. Medenica was arrested while trying to catch a plane to Belgrade due to the suspicion of the Special State Prosecutor’s Office that she committed two criminal acts – the establishment of a criminal organization and illegal influence.

Once the first woman in the Montenegrin judiciary, Medenica has been mentioned in writings between her son Miloš Medenica and her long-time bodyguard and police officer Dušan Lalić via SKY application. Transcripts of their communication that the Special State Prosecutor’s Office received from EUROPOL were recently published by the Libertas portal.

They pointed toward the role of Miloš Medenica in cigarette smuggling and drug trafficking. In addition, it was pointed out in the talks that his mother, Vesna Medenica, was aware of these illegal actions and that she was ready to provide the necessary protection to him and Lalić if necessary.

“I am surprised by your questions and completely confused why they were posed to me. In the system of reviewing any responsibility, even criminal, the state authorities have the main and the only legitimate role. I expect them to be called to examine all grounds for suspicion according to the procedure as provided by procedural laws and, if there is a reason, they will do so,” said Vesna Medenica for Libertas when this information became public while her son said that he has nothing to do with these events.

After receiving the transcripts, Special State Prosecutor formed a case against Miloš Medenica and marked him as the organizer of a criminal group. However, Medenica left Montenegro last December, only two days after Dušan Lalić was arrested on suspicion of committing the crime of creating a criminal organization and committing the crime of drug trafficking. Lalić has been in custody since then.

The arrest of Vesna Medenica raises the question of the importance of this procedure for the fight against high-level corruption as well as of the existence of the political will to finally make progress in this area. In her statement for N1, Vanja Ćalović Marković, the executive director of non-governmental organisation MANS, said that the arrest is certainly an important step but that there are no guarantees that this case will be adequately processed.

“An important and courageous step by the new special prosecutor has been taken. However, we did not have any reform in the judiciary – it was left as it was left by Vesna Medenica and that is why I say that we will see whether she will be detained or not, let alone whether an indictment will be filed later,” said Ćalović Marković and added that it was Medenica who elected staff at the top of the judiciary.

Two controversial decades in the judiciary: The role of Vesna Medenica

Vesna Medenica was in the judiciary for 17 years. In 2003, she was elected as Supreme State Prosecutor and President of the Prosecutorial Council. After four years, she became the head of the Supreme Court. She was elected to that position three times, the third time unconstitutionally, unanimously by the Judicial Council, despite warnings from the European Commission.

Almost two decades of her very important role in the judiciary were marked by controversial decisions and several affairs.

In 2019, MANS came across data related to its evasion of income of 140,000 euros from the sale of land to a controversial businessman at a price ten times higher than the market price.

She signed the general legal position of the Supreme Court, which abolished the possibility of challenging the decisions of the Assembly on the appointment and dismissal of public officials, regardless of the legality of such decisions, before the Montenegrin courts. This position followed a series of political shifts in the councils of the Agency for the Prevention of Corruption, RTCG and the vice-governor of the Central Bank.

Petar Komnenić, the editor of the show Načisto, added in a statement for Vijesti television that Medenica’s closeness to the representatives of the previous government was also troubling.

“Everything we know suggests that she was a favourite and an extended arm of those in power during the long-term domination of the DPS, whose leader, as he negotiates the constitution of the new government,  “enlightens us” that this is a challenge for the authorities. Obviously, it was not a challenge for the authorities during his domination,” he said, adding that it was the party’s representatives who spoke about convincing the European Commission of the validity of its third term.

During Medenica’s mandate, the European Commission was assessing in its report that the Montenegrin judicial system was moderately prepared. Judiciary was perceived as vulnerable to political interference, and further commitment was needed to ensure its independence as well as its efficiency.

Neither these nor other decisions and actions of Medenica led to any measures taken against her. The European Commission warned of the lack of accountability in the judiciary of Montenegro for years. Taking into account that there was no significant reform in the judiciary since she stepped down and having in mind her past role and still present influence in this branch, there is a doubt that accountability will be established this time, as well as that Medenica will be adequately processed.

In a statement for N1, Ćalović Marković said that it would be interesting to follow the situation regardless.

“We know that Vesna Medenica can be a very troublesome witness for many if she decides to speak, including those who still perform some of the highest state functions. We will see which way he will go,” she stated.

Whether the suspicions will be properly substantiated, and whether the investigation will be effective remains to be seen. Yet, as Komneninć said in his statement for Vijesti, everything that Medenica is accused of should be seriously supported, and this case must be “a serious introduction to the analysis of the situation in the judiciary, problems and deviations that Medenica left behind”.

“The arrest of the first lady of justice until yesterday testifies to the skilfully created lies we have lived in the previous decades. It causes disgust that a person who convinced us at the beginning of her term as the Supreme State Prosecutor that there is no organized crime in Montenegro ended up under suspicion of creating a criminal organization,” Komnenić concluded.

Fight against corruption represented one of the priorities that the government that was established after the 2020 elections. Yet, the reality showed that is not an easy task since the system continued to be haunted by the ghosts of the previous regime.

Thus, as European Commission 2021 report on Montenegro noted, this country made limited progress in this field. The report stated there is a need for strong political will to effectively address this issue as well as a robust criminal justice response to high-level corruption. It was noted the track record of investigations, prosecutions, and final convictions in cases of high-level corruption increased but remains to be further consolidated.

Adequate confrontation of the competent institutions with this case can be a turnaround in the fight against corruption that will open the door for future high-level corruption cases and, finally, a better result in this field.