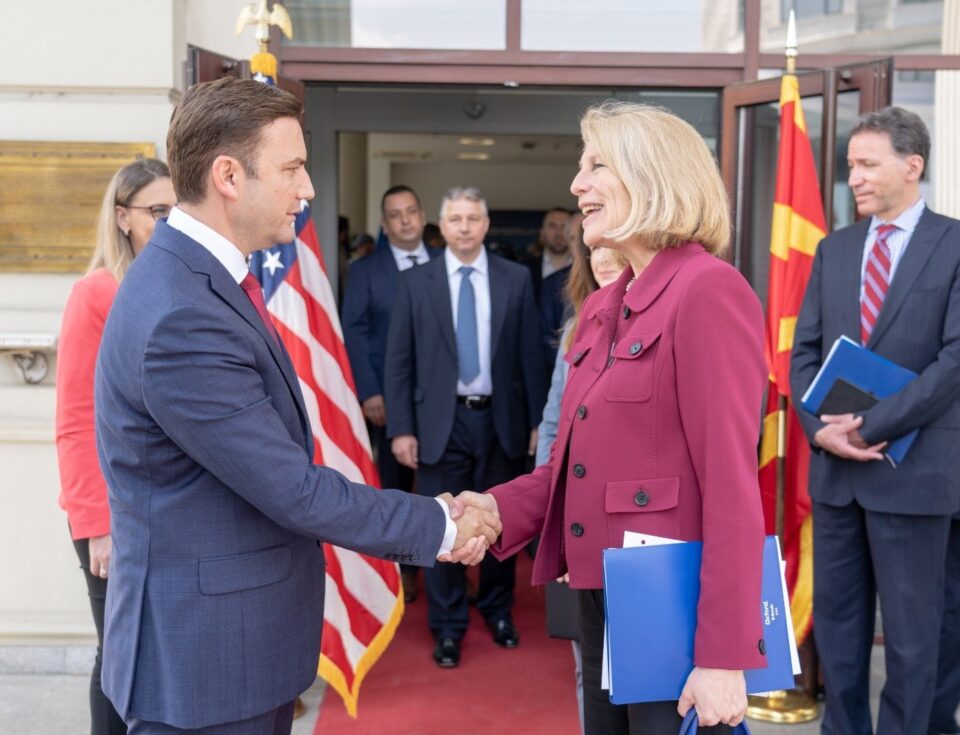 The visit of the Assistant Secretary of State for European and Eurasian Affairs Karen Donfried to the Western Balkans this week reaffirmed the main positions of the United States towards the region.

Kosovo and Serbia should re-engage in the Dialogue with the aim of mutual recognition; the US supports the territorial integrity of Bosnia and Herzegovina and urges for timely and fair elections; the start of EU accession talks with Albania and North Macedonia is long overdue – these were the main messages of Donfried’s tour across all six Western Balkan countries.

In Serbia, the sanctions on Russia, which the country has not imposed, were also one of the topics. This was not conveyed by the press releases of both the President and the Prime Minister following their meeting with Donfried, but the Assistant Secretary of State confirmed that the issue is now “on the table” in an interview for Politika daily.

The political weight of the visit might be contributed to the status of the messenger rather than the content. In recent years, the US diplomacy towards the Western Balkans has been regularly managed by the Deputy Assistant Secretary of State in charge of the region, currently Gabriel Escobar, while the arrival of a higher-ranking member of the administration signals an intensified engagement.

The Biden administration has shown a willingness to focus on the Western Balkans more than its predecessors, even before the war in Ukraine and the period of heightened tensions within Bosnia and Herzegovina. The recent series of sanctions on the former and current political leaders has been one of the signals that the policy towards the Western Balkans could become more robust.

There were not many announcements of specific policy steps during the visit of Karen Donfried, though some did appear. In North Macedonia, for example, Minister of Foreign Affairs Bujar Osmani announced that a Strategic Dialogue between Washington and Skopje will begin on 2 June.

“We are especially honored that North Macedonia will become the first country in the Western Balkans to open a Strategic Dialogue with the United States, which will deepen our strategic partnership and, more specifically, frame our bilateral cooperation”, Osmani said during a press conference with Donfried on 28 April.

Strategic Dialogue, a foreign policy instrument United States deploys in its relations with a number of countries around the world, including Croatia and Slovenia, will be an important long-term solution to North Macedonia’s development given that the EU prospects are problematized by the veto from Bulgaria, says Misha Popovikj, Head of the Centre for Good Governance at the Insitute for Democracy Societas Civilis from Skopje.

“I would say that the US is not alone in this respect and there are other initiatives with EU member states”, Popovikj says for European Western Balkans.

During the conference with Osmani, Dofried said that the United States wanted to see the first EU Intergovernmental Conferences with North Macedonia and Albania as quickly as possible.

“This Conference has been delayed for too long. You have fulfilled hard tasks and reforms and you deserve fast progress”, Assistant Secretary of State said.

This position of the United States is not new. Already in June last year, the State Department officially supported the holding of IGCs, but the Bulgarian veto nevertheless remained in place.

After the changes of Government in both Skopje and Sofia, efforts toward a rapprochement were made, but Bulgaria is still insisting that the Bulgarian minority should be inserted into the Constitution of North Macedonia before the veto is lifted. In the meantime, skepticism and disappointment in North Macedonia are growing.

The Strategic Dialogue with the United States, of course, cannot be compared with the EU accession negotiations, but it can still contribute to the reform process. Misha Popovikj believes that this cooperation will seek to improve the governance and security reliability of North Macedonia.

“The focus should be on building institutional resilience and independence, based on sustainable anti-corruption capabilities in critical sectors and decision-making which is competent and visionary, and provides long-term perspective for the citizens”, he emphasizes.

Marjan Gjurovski, Assistant Professor at the Faculty of Security – Skopje, says that the announced start of the strategic dialogue between North Macedonia and the United States raised the strategic partnership between the two countries to the highest level.

“This diplomatic activity is especially important for the stabilization of the Western Balkans when we have a large penetration of Russian influence through hybrid threats. I believe that the relations between the United States and North Macedonia in defense, economy, education, and information technologies will be strengthened through special projects “, he explains for our portal.

Following Donfried’s meeting with Serbian President Aleksandar Vučić and Albanian Prime Minister Edi Rama, both leaders emphasised the importance of the Open Balkan and the American support for it. Donfried herself did not comment on the initiative.

According to the statement released by the Office of the President of Serbia on 26 April, “the President especially pointed out the Open Balkan initiative as an example of successful regional cooperation and the fight for common goals, emphasizing that it is the best way to prepare regional states for EU membership, but also an opportunity to reach European standards before joining”.

Three days later, Edi Rama wrote on his Facebook page that he spoke with Dofried about “positive progress of the reforms, strengthening justice, strategic investments in energy, Bulgaria’s veto on North Macedonia, the situation in the region, as well as the full support of the United States for Open Balkan”.

The current leadership of Serbia and Albania are the driving force behind the initiative, which also featured, although less prominently, in a press statement of the Prime Minister of North Macedonia Dimitar Kovačevski. The three countries agreed to hold another summit within the initiative in June.

Other countries in the region have so far refused to join, with the former Prime Minister of Montenegro Zdravko Krivokapić claiming recently that Serbia was “blackmailing” Montenegro to become a part of the Open Balkan, while the initiative was “not good for the country”.

The new Government of Montenegro, elected on Thursday night, stated in its programme that its goal would be the “appraisal of the regional initiatives in the context of the key goal – faster EU membership of Montenegro”.

In an interview for the Montenegrin public broadcaster, Donfried also reflected on the fact that the new Government had been elected before she arrived.

“I would say that you elected the new government just for my visit. I don’t know if you foresaw that, it was not clear to us either how things would develop in Montenegro,” Donfried said.

According to RTCG, she denied that the United States had anything to do with the change of government, but added that it was clear that the new Government was committed to European Integration, fulfillment of the NATO commitments, fight against corruption, and implementation of the democratic reforms.