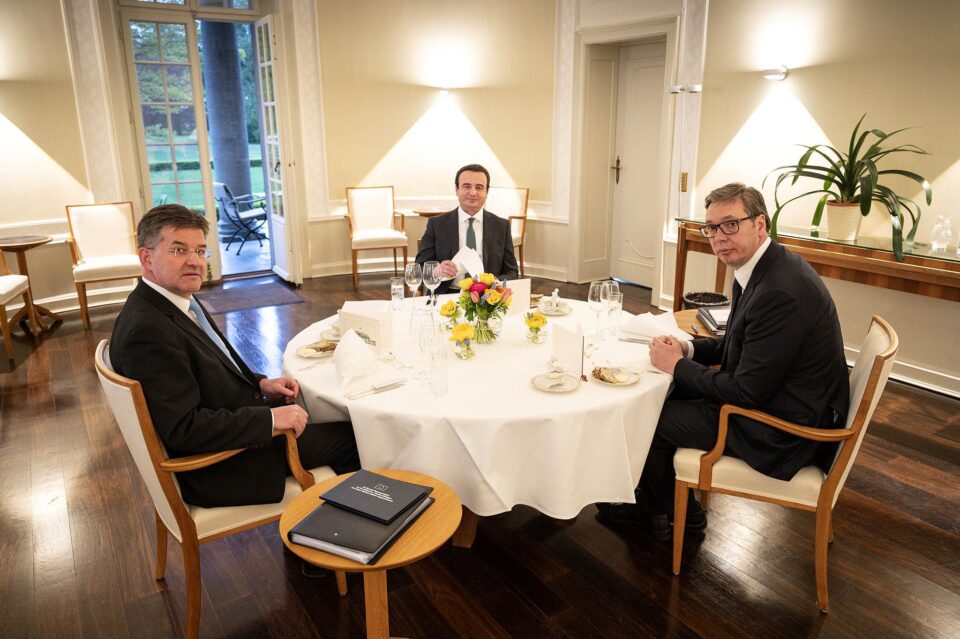 BERLIN – Prime Minister of Kosovo Albin Kurti and President of Serbia Aleksandar Vučić met yesterday in Berlin in the presence of the EU Special Representative for the Belgrade-Pristina Dialogue Miroslav Lajčák. It was the third direct meeting between Kurti and Vučić, following the two meetings in Brussels in June and July 2021.

According to Lajčák, he had an “informal dinner discussion” with Vučić and Kurti and thanked the German government for hosting it.

“We will continue the discussion on the level of Chief negotiators on 13 May”, he tweeted.

The most pressing topic of the Dialogue is currently the issue of license plates, following the crisis in September and October when the sticker regime was introduced. The Chief negotiators failed to reach an agreement on a permanent solution on 21 April in Brussels.

In a Twitter post on his official account, Aleksandar Vučić thanked “the german hosts for the organisation of a dialogue between Belgrade and Pristina”. He also posted a photo that included Kurti and himself.

Albin Kurti also tweeted about the meeting, saying that the recent Russian aggression in Ukraine “added to our disagreements”.

However, he said, Kosovo remains committed to principled dialogue with Serbia for an agreement centered on mutual recognition.

Recent Russian aggression in Ukraine added to our disagreements. But we remain committed to principled dialogue with Serbia for an agreement centered on mutual recognition. Tonight’s round took place at the Borsig Palace in Berlin over a working dinner. pic.twitter.com/XTieRrUisc

According to the press release of the German Chancellor, the Russian attack on Ukraine and the EU accession process were the central topics of discussion between Chancellor Scholz and President Vučić.

After the meeting, Scholz reaffirmed the EU perspective of the Western Balkan countries.

“It is in the interest of the region and the EU that six Western Balkan countries have a perspective of becoming the full EU Member States”, the Chancellor said.

When it comes to the Russian aggression on Ukraine, Scholz said that the EU and the candidate countries must stand together and defend their common values. Serbia is the only candidate country that has not aligned with any EU sanctions on Russia since the war began.

Scholz also emphasised that progress in the dialogue between Serbia and Kosovo is of enormous importance, both for the lasting peacekeeping and stability in Southeast Europe and with a view to the EU integration of both countries.

“It takes courage and determination. All commitments made must be honored. Unilateral actions and polemical rhetoric are not helpful”, Scholz said.

In the press conference following the meeting, Vučić said that Serbia has positioned itself on the nature of the conflict in Ukraine with its votes in the United Nations General Assembly, in which the country supported the resolutions condemning Russia.

He also spoke about the Belgrade-Pristina Dialogue.

“We will do our best to go towards a compromise solution, to try to find those compromise solutions, but they cannot be just our wish, but I would say that the word compromise is already clear enough for us and for others who participate in the dialogue,” he said.

Vučić also met today with the Foreign Minister of Germany Annalena Baerbock, who visited Serbia and the rest of the region in March.