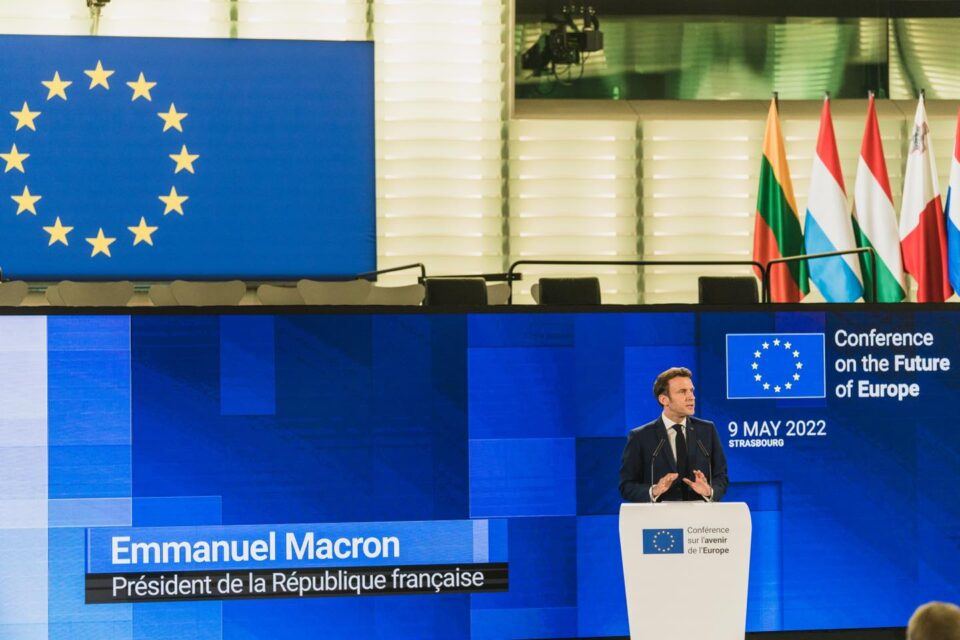 Speaking at the closing ceremony of the Conference for the Future of Europe on 9 May, President of France Emmanuel Macron proposed an idea of a European Political Community. It was a reaction to Ukraine’s EU application, offering it an alternative form of integration in the foreseeable future.

In his speech, Macron made a distinction between Ukraine and “several countries in the Western Balkans that have begun their accession process”. Nevertheless, some countries in the region, such as Albania, believe that the idea might also apply to them, underscoring the problems with the current enlargement process to the Western Balkans, a region that was promised a perspective of EU membership almost twenty years ago.

According to Macron, “we very clearly need to find a way to think about our Europe, its unity, and its stability, without weakening the closeness built inside our European Union”. He estimated that the membership of Ukraine would take at least several years, more likely several decades.

Macron, therefore, proposed a new European organisation – the European Political Community – which would allow a space “for political and security cooperation, cooperation in the energy sector, in transport, investments, infrastructures, the free movement of persons and in particular of our youth”.

For those who have been following the political positions of President Macron, this proposal did not come as much of a surprise.

“He is consistent with what he’s been saying the last five years: namely 27 (members) is too much already, we can’t go on like this without changing our internal rules and discussing what we want to achieve as a political union… He can (also) easily say that he’s taking the risk to think outside the box when everyone else is comfortable with the illusion that non-functioning enlargement is the only game in town”, says Loïc Tregoures, lecturer at the Institut Catholique de Paris.

The question arises whether this scenario is completely off the table for the Western Balkans and whether it is more realistic for some countries than others.

A precondition for this discussion, of course, would be an agreement of all EU Member States to establish such organisation. This is also far from certain, as was the case with Macron’s previous, more ambitious proposals to reform the EU.

Not applicable for the countries already in the accession process?

On the same day he made the speech, Macron visited German Chancellor Olaf Scholz in Berlin. In the press conference, the President of France was asked specifically whether Balkan countries could become a part of the potential European Political Community.

Macron pointed out that there are countries that have already initiated the accession process, which, he said, they should complete.

“They shouldn’t be discouraged”, said Macron, without specifying which countries he was talking about. Montenegro, Serbia, North Macedonia, and Albania have all been recognised for years as official candidates for EU membership.

Macron, however, mentioned Bosnia and Herzegovina and “other countries in the Western Balkans” that have not formally taken the path of EU membership, for which “the question remains open”. The only other potential candidate in the region is Kosovo.

“It is clear that this must not and will not stop us from advancing what we have started, namely enabling the enlargement processes that we have been working on for so long… I just want to make that clear using the example of North Macedonia. There have been very courageous political leaders who have dared to do something to make it possible for the admission process to begin now – and we should find a way for this courage not to be let down”, he said.

Loïc Tregoures believes that it is too late for Serbia and Montenegro to be included in the European Political Community.

“It is probably (also) too late for Albania and Macedonia, although it would be something advocated if the process doesn’t lead anywhere. But if so, then you are admitting that the Community is a second league, which is unacceptable for the candidates themselves. Especially after France pushed so hard to have a new (enlargement) methodology”, Tregoures says.

However,  he points out, for well-known reasons, BiH and Kosovo are specific cases, whose problems cannot be encapsulated nor solved by becoming an EU Member. So, one could see their membership in the European Political Community coming, he says.

“But then again: if Kosovo is fit for the EPC, why wouldn’t it be fit for being an EU member while surrounded by (other) EU members? As we say in France, you leave ambiguity only at your own expense. At some point, the EPC is either a waiting room, or it is designed for countries that will be told that they won’t become EU members”, Tregoures says.

Natasha Wunsch,  Assistant Professor at Sciences Po and a member of Balkans in Europe Policy Advisory Group (BiEPAG), says that it is likely that the membership in the  European Political Community, as an alternative to the sluggish accession towards the EU, will rise to the agenda for the Western Balkans.

“When thinking about enlargement, the concept of a European Political Community indeed appears to echo notions of a ‘privileged partnership’ for Turkey in the early 2000s, which was rejected by the Turkish side as an offense given its long-standing engagement in the accession process towards full membership”, Wunsch says.

She adds that one way in which the European Political Community may, however, be cast in more successful terms is if it becomes an intermediary stage towards full accession, as proposed in models of phased membership that have been repeatedly discussed for the region.

“Once European Political Community accession is viewed as a temporary, rather than a permanent alternative to full membership of Western Balkans, it does stand a chance to be accepted”, Wunsch stresses.

But how likely is that, exactly? In recent months, several proposals for some sort of phased accession of the Western Balkans to the EU have been put forward, without serious signals that they would be implemented.

The same can be said for President Macron’s previous proposals for new forms of multi-speed Europe, the most prominent of which he made in his 2017 Sorbonne speech.

Natasha Wunsch assesses that the other EU Member States are likely to be reluctant to accept the idea of the European Political Community for two reasons.

“For member states who are strongly supportive of enlargement towards Ukraine, it will feel like too modest an offer, since the main benefits of membership, primarily in terms of political participation in EU-level processes and access to regular EU funding, are unlikely to be extended to the members of the new European Political Community”, she says.

More problematically still, she adds, strongly pro-European Member States may fear that creating a format for cooperation below the level of full membership may push some more Eurosceptic members to opt for this alternative, allowing them to cooperate on sectoral policies without being submitted to the full set of the EU democratic and economic standards.

“This may concern, for instance, the Member States that have currently come under scrutiny for violations of the rule of law”, Wunsch points out.

It seems unlikely for Member States to reach a consensus on the detailed set-up of a European Political Community, which may also be viewed more generally as a way to detract attention from the ongoing challenges the EU faces in its current set-up, Natasha Wunsch concludes.

Loïc Tregoures also says that it is to be expected that some countries, such as the last who integrated into the EU, would criticize the idea, on the ground that it would create a second league, with no justification if those countries would nonetheless respect the same rules and adopt the same standards.

“Can a country be a candidate and a member of this community at the same time? It is unclear. Thus, it is to be expected that a clarification will be demanded. And the only clarification possible is to say once and for all which countries have a chance to become a member and which don’t”, he adds.

Before the war in Ukraine, Tregoures recalls, it was widely understood that Western Balkans countries would be the last ones to join.

“Nobody was talking about integrating Moldova, Georgia, or Ukraine. This is what it’s all about. From that standpoint, it can be a step forward because it is better than nothing for those who would need decades to catch up. But it requires telling those countries the truth”, he concludes.

“Some progress” in Serbian economy, but several questions remain