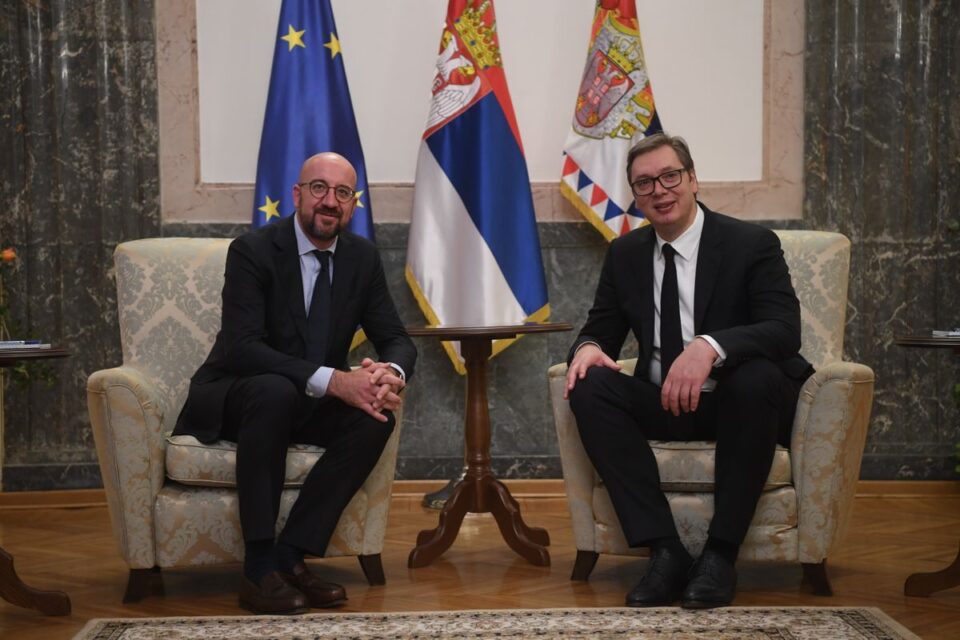 A day before his visit, Michel proposed reform of enlargement and a European Geopolitical Community, echoing the previous proposal of President of France Emmanuel Macron. He is scheduled to visit Albania and Bosnia and Herzegovina today.

In a joint press conference with Aleksandar Vučić, Michel said that, in June, the EU will organise a meeting of the 27 EU leaders with the leaders of the Western Balkans.

“Russia’s war against Ukraine has sent shockwaves across our continent. It has ended 20 years of peace that we have all, together with you, worked so hard for in Europe. It has come at a time when, after Covid, we should have been working together to repair our economies and protect each other”, Michel said.

He added that the challenges we face today require new ways of thinking and new ways of working.

“We need to speed up EU integration, and we must create new incentives for reform. We want to deliver concrete benefits for all Serbian citizens and for all our partners in the region. That means already starting integration now – during the accession negotiations – rather than waiting until they are fully completed. We will have the occasion to discuss this topic in June in Brussels”, Michel said.

In his proposal for a reform of enlargement on Wednesday, the President of the European Council proposed a form of staged accession – when a country meets the necessary standards in a given sector, it could be integrated into that policy.

During the press conference, Michel said that his visit also sent a strong signal of our close EU-Serbia cooperation.

“I have just visited the Science and Technology Park. It is an excellent example of how the EU is contributing to the future of Serbia and to our joint priorities. When we invest in research, innovation, and Serbian start-ups, we are investing in the Serbian people. Your projects become our common projects, your future becomes our common future”, the President of the European Council said.

He added that the war has had a dramatic impact on energy supplies across Europe.

“We are also supporting Serbia. The Serbia-Bulgaria gas interconnector for instance, started last January, will help diversify Serbia’s gas supply. And the EU has invited the Western Balkans to join our new common procurement platform for gas, hydrogen and LNG”, he concluded.

President Vučić said he had asked Michel about the initiative on the creation of a European Geopolitical Community on the European continent. He said that he saw nothing wrong with it and that it was not an alternative to EU membership.

“For me, the idea of ​​Michel and French President Emanuel Macron is important and significant and I think it can contribute to accelerating the path to full EU membership and improving the position of all Western Balkan countries”, Vučić emphasised.

Vučić said that he and Michel discussed the problems of energy supply in Serbia and that certain guarantees and words that were important were obtained, that Serbia can count on the support of the EU.

“We also talked about Russia’s attack on Ukraine, and Michel expressed the expectation that Serbia would join the sanctions against Russia, and I informed him about our situation and our political views,” Vučić said.

“We talked about Serbia’s European path and I pointed out that our commitment and the main strategic goal is full membership in the EU”, Vučić said.

He added that it was not only emotional but also a matter of reason.

“We have talked about values a million times, but trade in 2021 with the EU is almost 31 billion euros, and in the four months of this year it is 33 percent higher than last year, almost nine billion euros”, Vučić pointed out, FoNet reported.

Hahn in BiH: Concrete results the only way forward