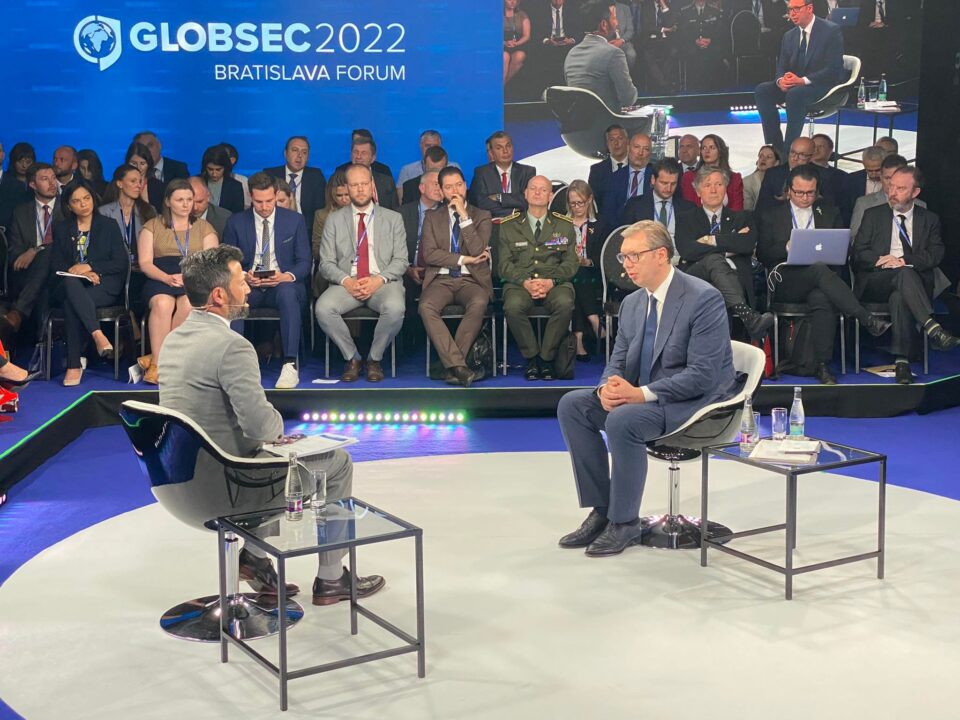 BRATISLAVA – Speaking at a GLOBSEC 2022 event on Thursday, President of Serbia Aleksandar Vučić discussed the reasons why Serbia had not imposed sanctions on Russia and the future of the country’s relations with the EU. On multiple occasions, he brought up the 1999 bombing of Serbia as a reason why its citizens find it hard to support Western foreign policy.

Asked about the fact that Serbia is pushing for EU membership and, at the same time, securing gas deals with Vladimir Putin and how one can do both, Vučić said that “everybody’s doing both”.

“Sorry that I am saying something that someone does not want to hear, but you cannot survive without gas supply… Gas supply is not even on a sanction list (of the EU). There are countries that do not want to use the Russian gas, but they are just reversing the gas and paying a special tax to the neighboring countries and using the Russian gas in the end”, he said.

Vučić added that Serbia is working towards the diversification of its energy supply and that he had conversations with (European Commissioner) Maroš Šefčovič on this issue.

“We need to survive and act rationally and pragmatically, although I know that nobody wants to hear those words. When you have a sort of hype, when everybody is reiterating and repeating the same, it is very difficult for any kind of rational thoughts”, Vučić said.

He added that he was talking about the necessity of reaching a compromise with Pristina during his inaugural speech on Tuesday and said that this will be Serbia’s goal. He did not specify the content of that compromise.

Talking about Serbia’s elections in April, Vučić said that many right-wing parties received stronger support than before because of the war.

“Many of our voters were angry at us because we voted in the UN against Russia”, Vučić said.

He added that the people of Serbia do not have anything against Ukrainians.

“The issue is that the people of Serbia still remember what happened in 1999, and now they say: when you were doing that, you did not care about territorial integrity, about which we are now listening every day”, the President of Serbia said.

Explaining why Serbia has not aligned with sanctions on Russia, Vučić said that 77% of people in the country were against the sanctions.

“So far, we have always had the support of Russia and China on the issue of the territorial integrity of Serbia. If we do things differently, then we are going to lose that support”, he also said.

He also said that he did not believe in sanction policy.

“We cannot harm anyone but ourselves. And I am doing my best not to harm my people”, Vučić said.

He stressed that Serbia had so far donated 3 million Euros, plus humanitarian aid, to Ukraine, but that it will not send military aid, or armaments, because it does not want to be a part of a war.

Asked about the prospects of EU membership of the Western Balkans after the start of the war in Ukraine, Vučić said that Serbia can really speed up its work on reforms if the EU shows that it is counting on it as a future member.

“I do not think that something can happen for the Western Balkans in June. We put a lot of hope on December. I hope we can do a lot of our homework and hope that we will have a much clearer situation in Europe and bigger decisions on the Western Balkans, especially from France and Germany”, Vučić said.

Vučić was also asked when will Serbia be able to deal with Milošević trauma that would, as the member of the audience put it, help it deal with Russia and Putin and enter the EU.

“If you justify the aggression against one sovereign state and doing that without the permission of the UN Security Council, then I do not know what kind of justification one can find. We have principles, and those principles are UN Charter and territorial integrity… We need to overcome our mythological past partially, and we will have to do it. But somebody needs to put himself or herself in our shoes, and see that the world is not black and white”, Vučić responded.

European Western Balkans is a media partner of the 2022 GLOBSEC Forum.