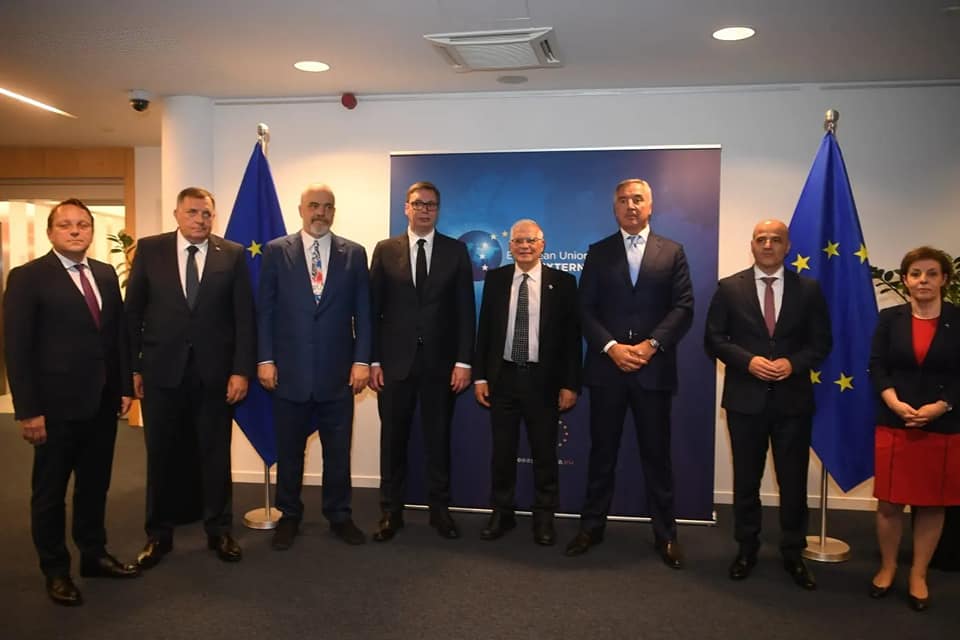 Meeting of the WB leaders with the High Representative in Brussels, 11 May 2022; Photo: Facebook / Aleksandar Vučić

Since the start of the war in Ukraine, EU High Representative Josep Borrell has released 28 Declarations on the alignment of third countries with the first five packages of EU sanctions on Russia and Belarus. According to the Declarations, four countries in the Western Balkans – Albania, Bosnia and Herzegovina, Montenegro, and North Macedonia – have aligned themselves with all the sanctions.

In each Declaration, it is stated that the third countries “will ensure that their national policies conform to this Council Decision”. This has proven to be more challenging for some countries than others.

As our portal reported in March, while Montenegro had formally aligned with sanctions on Russia, it took a while to get them implemented. The government, then led by Zdravko Krivokapić, lacked the majority for this decision for several weeks.

It was only on 8 April that then Deputy Prime Minister Dritan Abazović announced that the Government had adopted restrictive measures in response to Russia’s war of aggression against Ukraine. This decision was made by the caretaker government of Zdravko Krivokapić, which formally left power only on 28 April.

🇲🇪 @MeGovernment has adopted restrictive measures in response to Russia’s war of aggression against Ukraine🇺🇦.

The measures adopted at this session covered most of the first three packages of sanctions. These include a ban on transactions with the Russian Central Bank, a ban on trade with Donetsk and Lugansk, as well as sanctions on numerous persons and entities.

As of the beginning of June, Montenegro is yet to implement the fourth and fifth package of EU sanctions. The new government, elected on 28 April, does not seem to have any internal disagreements over this issue, meaning that the implementation of these sanctions can be expected in the near future.

Bosnia and Herzegovina, on the other hand, is in a completely different situation. The issue of whether the country has aligned with sanctions at all is still disputed.

In May, Klix.ba portal published an article titled “Why is Dodik constantly repeating that BiH will not impose sanctions on Russia when it already has?” According to the article, it remains unclear why Dodik continues to insist that “BiH has not made a single decision to join sanctions on Russia” and that “the Representatives of Republika Srpska will not support that”.

Meanwhile, Nezavisne reported on 18 May that none of the institutions – the three-member Presidency, the Council of Ministers nor the parliament – have adopted any formal decision on the sanctions.

“So far, only some Delegations of Bosnia and Herzegovina to the EU Council or to the United Nations have supported and voted for certain sanctions, but this was not decided by any official institution in BiH responsible for foreign policy”, Nezavisne reported.

According to the law regulating the implementation of the international restrictive measures in BiH, it is the Council of Ministers that decides on this issue, following consultations with the Presidency. There is currently no information that either institution has had this topic on its agenda since the war began.

It seems, therefore, that BiH institutions have only notified the EU of their alignment with the sanctions, but the part about “making sure that their national policies conform” is still lacking. This situation has created uncertainty and opened the space for various actors to argue whether Bosnia and Herzegovina has aligned with the sanctions or not.

Serbia is in a similar situation, at least regarding the two sanctions the country has aligned with. Both instances of alignment were never communicated to the public by the officials. It is also unclear whether the procedure of their implementation has been fully carried out.

According to the law regulating the issue, adopted in 2016, the Government of Serbia decides on the restrictive measures based on the proposal of the Ministry of Foreign Affairs. That decision is then being published in the Official Gazette of the Republic of Serbia. No such decision has been published since the war in Ukraine began.

While Bosnia and Herzegovina has, according to the Declarations of the High Representative, aligned with all sanctions and Serbia has aligned with a very limited number of them, there is still doubt about the state of their implementation.

No controversies in the rest of the region

There is, on the other hand, no space for such doubts in Albania, Kosovo and North Macedonia, where the government decisions on the adoption of Council Decisions are available online.

While Kosovo was the first Western Balkan country to start implementing the sanctions, the governments of Albania and North Macedonia have the most complete implementation record in the region at the moment.

In March, April and May, the Council of Ministers of Albania adopted several decisions which amended previous documents on the alignment with EU sanctions towards Russia. As of 31 May, when the final decision was published on the website of the Ministry of Europe and Foreign Affairs, the country has implemented almost all of the EU Council decisions. The last ones are related to the exemptions from sanctions given to agencies and organisations which provide humanitarian assistance to Ukraine.

Kosovo was the first country in the Western Balkans to start formally adopting EU Council decisions on restrictive measures towards Russia. Already on 25 February, a day after the aggression had started, the Government in Pristina met and adopted a decision on the formal implementation of EU decisions from two days earlier, in response to the recognition of Donetsk and Lugansk People’s Republics by Russia.

These measures extended the list of persons who are banned from entering the EU and whose assets were frozen. The new list included Defence Minister Sergei Shoigu and the members of the Russian Duma who voted to recognize Donetsk and Lugansk, among others.

Kosovo Government adopted several other decisions in March and May implementing the majority of sanctions adopted by the EU, though some sanctions from the fourth and fifth packages are still pending.

The situation is similar in North Macedonia which, in 2021, had an alignment rate of 93% with the Common Foreign and Security Policy. Just like Albania, North Macedonia implemented sanctions in March, April and May. Currently, the Government has not yet had on its agenda the decisions that Albania implemented on 31 May, concerning the exemptions to the restrictive measures from the fifth package of sanctions.

On 3 June, the Council of the EU adopted the sixth package of sanctions, which includes a partial ban on imports from Russia of crude oil and refined petroleum products, a SWIFT ban for an additional three Russian banks and one Belarusian bank, and a suspension of broadcasting in the EU for three more Russian state-owned outlets.

It is expected that the new Declaration of the High Representative on the alignment of the third countries will follow. The pattern in the Western Balkans seems to have been set.

New atmosphere in the EU for the Western Balkans: How to turn goodwill into concrete steps?