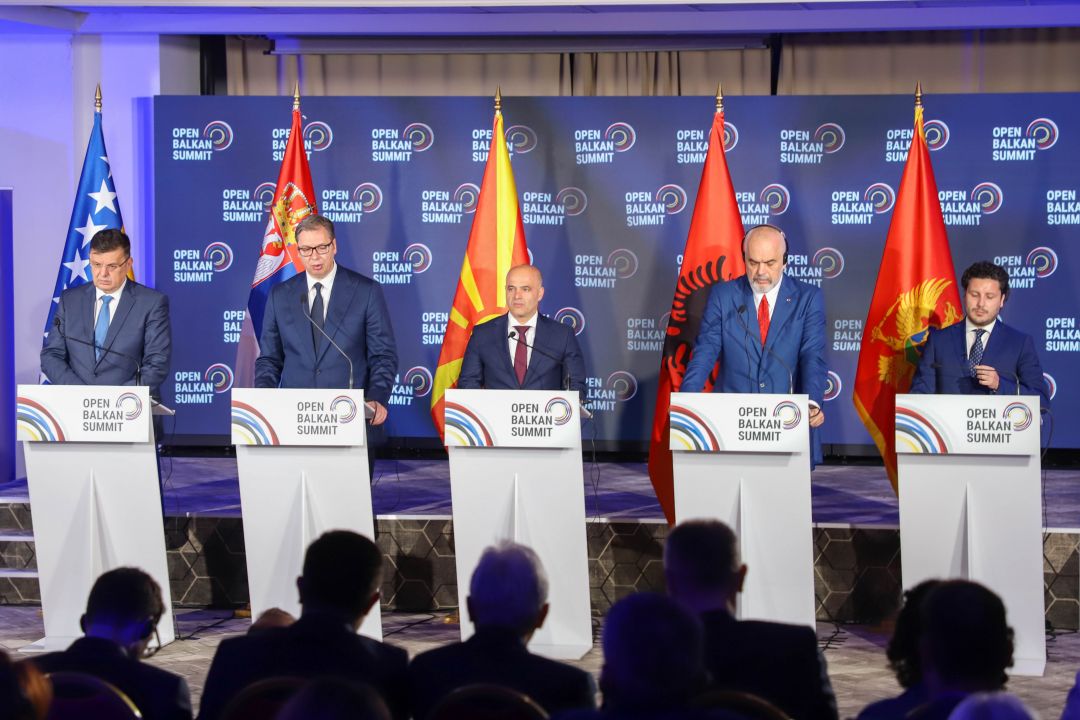 OHRID – Leaders of Albania, North Macedonia, and Serbia signed today an agreement on cooperation in the area of mutual recognition of diplomas and academic qualifications, as well as multiple memoranda at the summit of the Open Balkan initiative.

The memoranda that were signed are related to the cooperation in the areas of culture, tourism, and the economy, N1 reports.

This is the second time that official agreements have been signed in the framework of the initiative. The summit held in Tirana last December saw the signing of several agreements, including the one on conditions for free access to the job market, the interconnectivity of schemes of electronic identification for citizens, and the collaboration in the fields of veterinary and food safety.

In addition to Prime Minister of North Macedonia Dimitar Kovačevski, President of Serbia Aleksandar Vučić and Prime Minister of Albania Edi Rama, representatives of Montenegro and Bosnia and Herzegovina participated at the summit as guests. Prime Minister Dritan Abazović and the Chairman of the Council of Ministers Zoran Tegeltija expressed their personal support for the initiative, of which their countries are still not part.

In his address, Prime Minister Kovačevski said that the leaders expected the benefits of the initiative to be felt in the domestic budget of millions of families, and in the quality of life of millions of citizens, Sitel reported.

Kovačevski stressed that from a political point of view, the Open Balkans is aimed at accelerating the European integration of the Western Balkan countries and contributing to each of its countries on its path to membership in the European Union within a reasonable period of time.

He also announced that the companies from Northern Macedonia, Serbia, and Albania that manage the road tolls are working on connecting the electronic toll collection systems.

President of Serbia Aleksandar Vučić said that the Open Balkan is an unstoppable initiative, a good idea that will have an increasing number of supporters throughout the region, RTS reported.

Vučić proposed the formation of working groups for overcoming food supply and energy difficulties ahead of winter.

“It is important to form working groups immediately, or at the next meeting, which I suggest should be held in southern Serbia before the big summit… at the end of the summer in Belgrade”, he said.

He also added that Serbia expects firefighting helicopters to arrive and said that Serbia will be ready to intervene and help Albanian and Macedonian friends in potential cases of forest fires during the summer.

Albanian Prime Minister Edi Rama said during the press conference at the Open Balkan Summit that the initiative which arose as the idea of three people now belongs to all.

“All it takes is to drive to Ohrid and you can see the difference when you cross the border checkpoint where a simple board says ‘The Green Corridor of the Open Balkan’ for all those who transport goods is a major relief”, he said, Euronews Albania reported.

He emphasized that the leaders will find a common solution to the ongoing global crisis.

According to him, decisions that will positively affect the countries in the Open Balkan are crucial at the moment.

US Special Envoy to the Western Balkans Gabriel Escobar addressed the Summit via video link, saying that the United States supports the Open Balkans, but that it is also in favor of cooperation and integration into the wider European structure.

He called the Open Balkans a “great initiative”, but also said that he wanted to see more clarity on how it is supposed to function.

European Commissioner for Neighbourhood and Enlargement Olivér Várhelyi also participated in the Summit. He said that the Open Balkan is a good initiative that can enable the region to finally meet the challenges the region is having for many many years, not to say decades.

“But of course, it can also be a lever to accelerate the way into the European Union”, Várhelyi said, adding that the advantage of the Initiative is that it originated from the region itself.

As long as this Open Balkan Initiative is based on accelerating the adaptation to EU rules and norms, the Commissioner said, the Western Balkans can start reaping benefits regionally and of course, the EU will be there with the Economic and Investment Plan to help it bring these benefits even at a higher level.

“For this reason, I would also encourage you to make full use of the existing structures that we are also supporting, be it the CEFTA, be it the Regional Cooperation Council, because knowledge is there, infrastructure is there, and I see that also willingness is there to help the region to move to the next level”, Várhelyi said.

Hahn: Commission will recommend opening of negotiations with Albania and North Macedonia