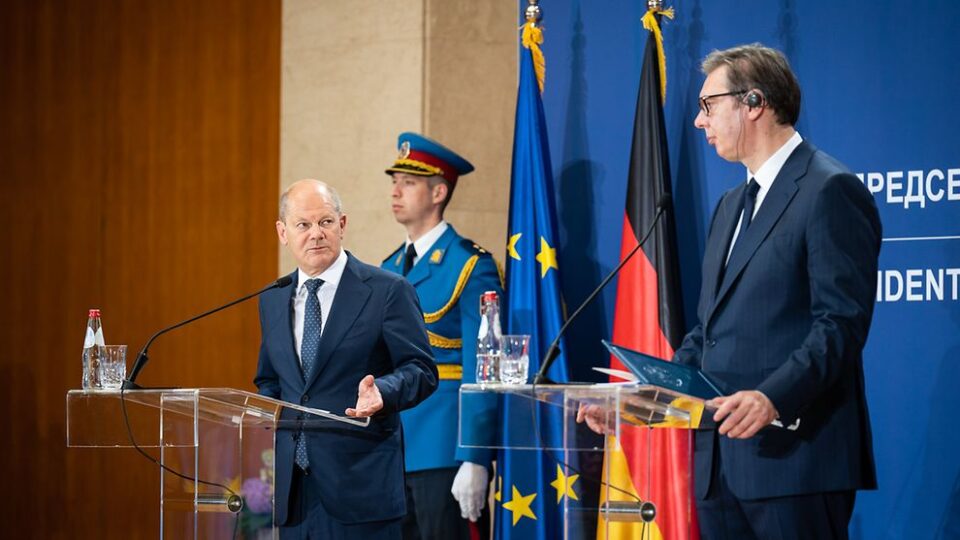 PRISTINA / BELGRADE – Chancellor of Germany Olaf Scholz started his visit to the Balkans today, meeting with Prime Minister of Kosovo Albin Kurti in Pristina and President of Serbia Aleksandar Vučić in Belgrade. The normalization process between Kosovo and Serbia was one of the main topics, and the Chancellor’s implication that the process should lead to mutual recognition caused a negative reaction in Belgrade.

One thing is clear, said Scholz at the press conference in Pristina: in the end, an agreement (between Kosovo and Serbia) must also clarify the issue of the recognition of Kosovo.

“It is inconceivable that two countries that do not recognize each other become members of the EU. Today I ask both sides again for a clear commitment to this dialogue. Everyone has to approach each other, as difficult as it is sometimes”, Scholz said.

This statement produced a tense moment in Belgrade, where President of Serbia Aleksandar Vučić said, during the press conference with Scholz, that today, for the first time, he heard that someone from Europe is asking for mutual recognition between Belgrade and Pristina.

He added that Chancellor Scholz understood that Serbia had never given up the Dialogue nor refused any meeting, that it had accepted every invitation, and had accepted the document on missing persons a year ago.

He pointed out that despite all that, Serbia is still negotiating a compromise solution, in accordance with UN Security Council Resolution 1244, which is in force and stipulates that Kosovo is a part of Serbia.

On the other hand, Scholz said that Germany’s position on Kosovo had been known for a long time and that, in Pristina, he said something that was obvious.

When it comes to the fact that Belgrade had not aligned with sanctions on Russia, Scholz said that all candidate countries for membership in the European Union are expected to join the sanctions.

Scholz said that it is obvious that the one who joins the EU accepts all the rules, and the one who is a member state would already have to implement everything about the sanctions regime.

“I said that the wish of a large number of people in Europe was for Serbia to join the sanctions,” Scholz said.

In Pristina, Prime Minister Albin Kurti emphasized that this was the first visit by a German Chancellor to Kosovo in 14 years. Upon his arrival, Olaf Scholz also visited a KFOR base, where he personally thanked the soldiers for their service.

At the joint press conference, Kurti welcomed Germany’s support for Kosovo’s application for admission to the Council of Europe and added that it also intends to become a member of the Partnership for Peace program by the end of the year.

As far as Dialogue with Belgrade is concerned, Kurti said that Kosovo has shown itself to be a creative and constructive side, but that Serbia is blocking the solutions that it is offering and presenting, even in the Berlin process.

“This was also evident at the last meeting on the energy issue for the four municipalities in northern Kosovo. I also informed the Federal Chancellor about Kosovo’s involvement in the Berlin process. In this respect, too, Kosovo shows that it wants to be in line with European politics”, he said.

Meanwhile, the German Chancellor said that he would like to enable new cooperation within the framework of this Berlin Process.

“In the autumn, I will invite you to a conference in Berlin. The region must move forward in creating a common regional market and swiftly finalize four important agreements on the free movement of people and the recognition of professional qualifications”, he said.

Asked what was Germany’s position towards the Open Balkan initiative, Scholz said that it was a major priority for Germany to advance the common market in the Western Balkans.

“There are four projects that are now on the agenda and we hope that they can finally be agreed upon in such a way that they can also be implemented. I think that’s what needs to be the focus now, that we’re making those advances that are achievable”, Scholz said.