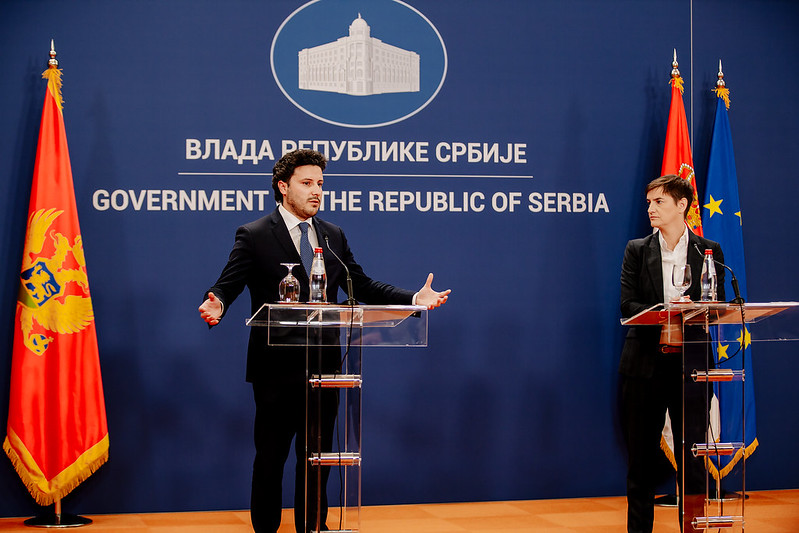 BELGRADE – The Prime Minister of Montenegro, Dritan Abazović is on an official visit to Belgrade, where he met with the Prime Minister of Serbia Ana Brnabić, and the President of Serbia Aleksandar Vučić. During the visit, leaders said that the two countries are “turning a new page “in their bilateral relations. The topic of the meeting was open issues between the two countries, as well as food procurement.

Speaking about relations with Serbia, Abazović said he is leading a European and secular state in which all religious communities would receive the same treatment.

“We are here to resolve every issue that remains open following the Constitution and the law, and I do not attach more importance to any issue than it deserves “, Abazović said during the press conference in Belgrade with Serbian Prime Minister Ana Brnabić, FoNet reported.

He added that he would lead the country following state and not party interest, alluding to the opposition of the Democratic Party of Socialists (DPS) and the Social Democratic Party on the text of the Basis Agreement between Montenegro and the Serbian Orthodox Church.

“I have heard that I am a traitor, but I have not heard that article 5 or 10, or 11 is wrong, that it is not following the Constitution and the law. That does not affect me “, Abazović said. He announced that he would have a meeting with SPC Patriarch Porfirije on Thursday.

Abazović pointed out that the extradition of the former president Svetozar Marović to Podgorica was also discussed at the meeting with Brnabić. Abazović assessed that not every issue could be resolved immediately.

“We cannot put pressure. We did not come to put pressure on the Government of Serbia, but to solve those issues that can be solved today, and those that need some more time to solve “, Abazović said.

He also stated that he and Brnabić raised the issue of keeping Montenegrin MPs at the borders, believing that the issue will be resolved. Abazović assessed that the visit to Belgrade “turns a new page “in the relations between the two countries and that it is unnatural for there to be any noise in communication.

“With this visit, a new cycle has begun, which means that we are ready to approach all open issues in a highly appropriate way and for the benefit of the citizens of both countries “, said Abazović.

The Prime Minister of Serbia, Ana Brnabić assessed today that the visit of the Montenegrin PM is extremely important for relations between the two countries.

“We do not have a country closer to Montenegro, as you know there is no one close to Monenetro than Serbia, neither politically nor economically “, said Brnabić, pointing out that open issues have accumulated in recent years.

The President of Serbia, Aleksandar Vučić announced on his official Instagram account that he welcomed the PM Abazović. Vučić stated that he exchanged opinions on current topics with Abazović. “We agreed that we will continue to build better relations “, Vučić said.