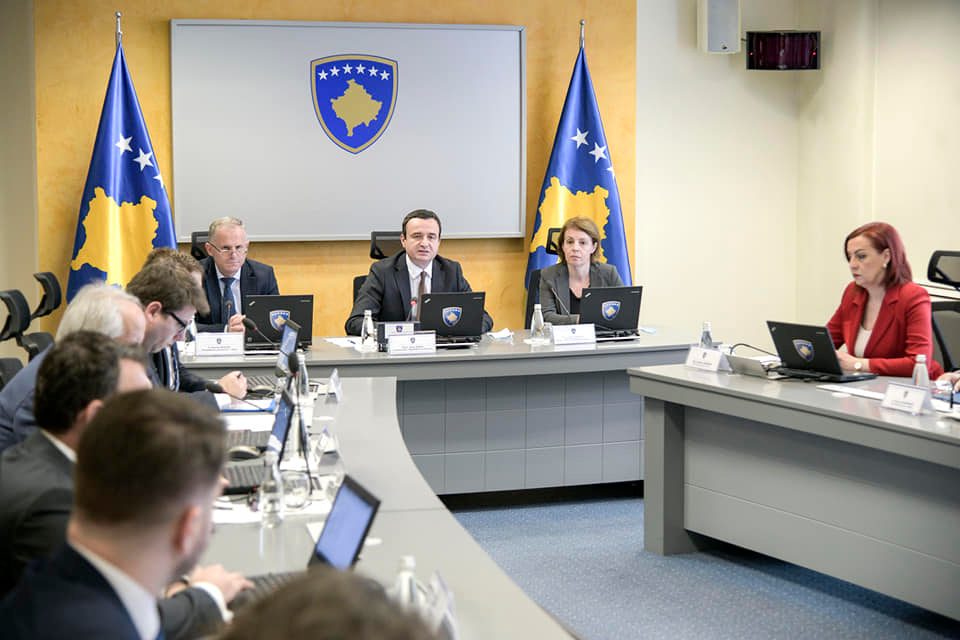 Session of the Government of Kosovo; Photo: Facebook / Albin Kurti

PRISTINA/BELGRADE – On Wednesday, the Government of Kosovo reached decisions regarding the license plates of Serbian vehicles both from within and outside Kosovo, as well as the entry of Serbian citizens into Kosovo, which caused harsh reactions in Belgrade.

The Government of Kosovo decided on 29 June that it would enable owners of vehicles equipped with Serbian license plates for Kosovo cities (“PR”, “KM”, “PZ”, “GL”, “UR”, “PE” , “DA” or “ĐA”) to register their vehicles with RKS license plates from 1 August to 30 September.

“The decision obliges the Ministry of Internal Affairs to take all necessary actions and measures in order to carry out this process”, the decision reads.

The Government also announced that Serbian citizens would not be able to enter Kosovo using their ID cards, but will be provided at the border crossing with a declaration form that temporarily replaces the use of such a document.

According to KoSSev, Prime Minister of Kosovo Albin Kurti described the measures as proportionate.

“It is an expression of the rule of law and the legal order, sovereign right and our commitment to fair and just relations with our neighbors”, Kurti said.

The decision of the Government, although without specific details, was already announced on the same day by the EU Special Representative for the Belgrade-Pristina Dialogue, Miroslav Lajčák, who left Pristina, and was on his way to Belgrade, KoSSev reminds.

At a press conference in Pristina, Lajčák said that the issue of license plates was no longer on the agenda of the dialogue and that the decision on that was up to the Government of Kosovo, and it could be expected that Albin Kurti would make a decision on that very soon.

Meanwhile, the President of Serbia, Aleksandar Vučić, stated yesterday evening in a press conference that the situation in the Western Balkans, and in Serbia, and especially in Kosovo and Metohija, has completely changed due to these decisions, FoNet reported.

Vučić said that he was holding the press conference alone, and not with Miroslav Lajčák, with whom he had a meeting, because he would talk about everything that Western powers are doing.

As he said, Belgrade has always been ready for dialogue, while others have not. He added that Kosovo made bad decisions and that they have the support of the Quint countries (USA, UK, Germany, France and Italy).

Vučić labeled the introduction of RKS plates “a new Storm”, referring to the operation of the Croatian Army in 1995 which resulted in hundreds of thousands of Serb refugees, and said that Priština would force Serbs or re-register their cars, and that if they did not do that, they would not only take away their plates but also their vehicles.

He added that Serbs from Kosovo will no longer tolerate that and that they will not tolerate incursions to the north, and that the representatives of the Serbian List told him that last night.

He pointed out that they gave the deadline for the tables until September 30, and that this means that “a general attack on the north of Kosovo is planned for October 1 at the latest”.

“For years, we have been suffering lies from representatives of the Quint and Kosovo-Metohija Albanians, and my problem is not that they think we are stupid, but that they think they are smart,” Vučić said, adding that nobody should be talking about justice as naked force will now be used.

“The West allows itself to do everything that comes to their minds and everything is based on what they say, although it has nothing to do with law, and they see everything else as an attack on democracy,” Vučić said.

He asked the “conductors” of the action in Pristina to lower their arrogance a little and to respect the rights of those they have already killed and hope that it does not occur to them to kill again.

“As the President, I tell you that we have nowhere else to go, we have been looking for a solution for 10 years, and they are just asking you to accept what they have already decided,” Vučić added.

He added that Serbia’s response would be “sober, but deadly and true” and that Serbia would not take military action, but that the request was not to take the property of the Serbian people and not to expel them. He said that there is no more dialogue, that Serbia will try to preserve peace, but that others do not want it, not only Albanians from Kosovo, but also their mentors.