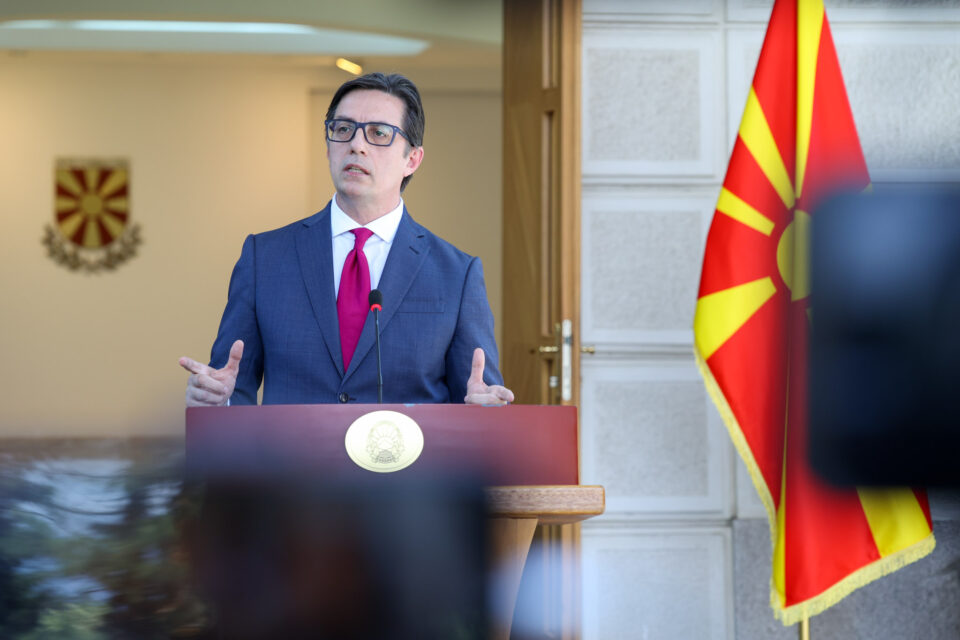 SKOPJE – Following the meeting of the Security Council of North Macedonia on Sunday, President Stevo Pendarovski described the French proposal to lift the Bulgarian veto as acceptable but also downplayed expectations that it would significantly accelerate the negotiation process of North Macedonia. Prime Minister Dimitar Kovačevski announced that the consultations on the proposal continue.

According to Exit.al, tens of thousands of Macedonians took to the streets on Saturday, protesting against the French proposal and saying their ethnicity and language is not up for debate. Protestors held signs accusing Bulgaria of “ethnocide”.

In his speech, President Pendarovski said that the decision to accept the modified French proposal will be neither a historic triumph, as one camp would like to say, nor a historic failure or debacle, as those in the other camp say, as it would only enable North Macedonia to formally open accession talks.

“In my opinion, it is a question of a transitional compromise for one of the phases of European integration, in which three elements are important, and therefore the proposal, in my opinion, in this format, is acceptable at this stage”, President of North Macedonia said.

The first element, he stressed, is that with the proposal, the Bulgarian blockade that has lasted for more than two years is lifted and the negotiations are formally opened after 17 years of waiting. Second, this enables a screening process that is a mandatory stage before the negotiations on the clusters, formerly the chapters.

“And thirdly, what is absolutely most important, it does not undermine the Macedonian identity in any way, because for the key, the fundamental determinant of that identity, for the Macedonian language, has a clean formulation in the proposal, without footnotes”, Pendarovski said.

The President also commented on the condition that the Negotiating Framework will be presented at an intergovernmental conference as soon as North Macedonia changes the Constitution to include the Bulgarian minority. Pendarovski described this as the biggest weakness of the proposal.

“Why do I call it a transitional compromise? Because it solves the current problem, the current blockade, but it has a de facto new blockade, which this time can be and most likely will be our own, domestic one. Knowing the internal political constellation, the necessary threshold for constitutional changes of two-thirds seems completely unattainable at this moment. This condition also contains the biggest paradox of the proposal – namely, nobody, in principle, here at home, is against the entry of Bulgarians into the Constitution, but internal polarization makes consensus on that issue impossible”, Pendarovski said.

He added that, with this proposal, history will not become a condition for progress in the negotiations.

“With the French proposal, which tomorrow will be pan-European, if we also accept it, history is not a requirement at all. There is only one sentence in both the proposal and the protocols that have been mentioned a lot, and few have read them to the end, which is that it is recommended that the historical commission should dynamize its work and have between eight and twelve meetings a year, without being suggested by the political factors of what their work should be and in which direction it should move”, he said.

Pendarovski, however, warned that the support for the EU is dropping dramatically in North Macedonia, mostly because of the constant conditions towards us and towards other countries from the Western Balkans. He said that the biggest generator for this problem is Brussels, with the enlargement to the enire region stalling for years.

In the meantime, Prime Minister of North Macedonia Dimitar Kovačevski met with the leader of the opposition VMRO-DPMNE party Hristijan Micskoski on Sunday. Mickoski, according to Telma, rejected the French proposal and urged the Government to do so. In return, VMRO would not demand snap elections.

On Sunday evening, Kovačevski said that the consultative process for the European proposal has not yet been completed and the talks continue.

What is the state of the priority anti-corruption legislation in Bosnia and Herzegovina?

Reactions to Commission’s updates: Time for EU to reach the positive decision