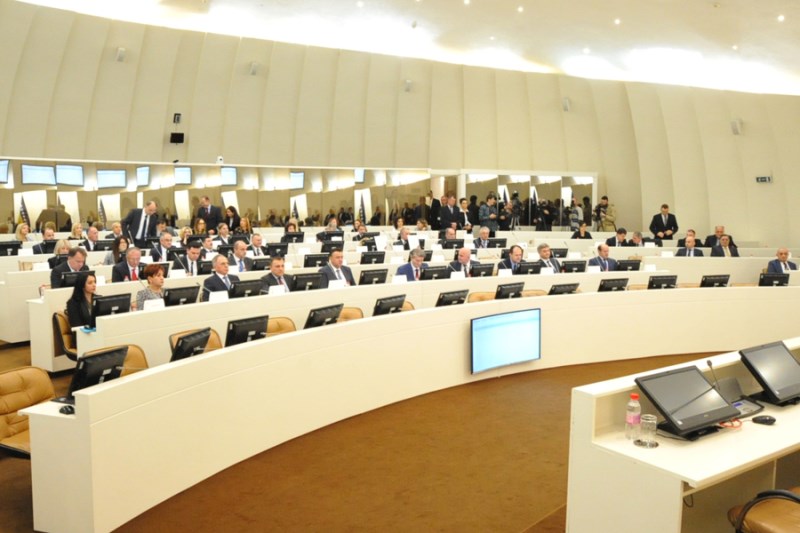 Session of the House of Representatives of Bosnia and Herzegovina; Photo: Parliamentary Assembly of BiH

The June leaders’ meeting between the EU and the Western Balkans left the region frustrated as none of the countries made any formal progress on their EU accession path. Leading up to the meeting, some raised hope that Bosnia and Herzegovina might be granted candidate status together with Ukraine and Moldova, but this did not materialise, with the EU leaders addressing the issue in their conclusions.

“The European Council is ready to grant the status of candidate country to Bosnia and Herzegovina and to that aim it invites the Commission to report without delay to the Council on implementation of the 14 key priorities set out in its opinion… in order for the European Council to revert to decide on the matter”, the conclusions adopted on 23 June read.

The Opinion in question was released in 2019 as an assessment of BiH’s application for candidate status, outlining key priorities for the country to fulfill before it can start the accession process.

Before the meeting, some EU Member States argued in favor of granting BiH candidate status right away. On 19 June, Slovenia presented this country’s proposal for that aim. As stated in the document, after getting the candidate status to start accession negotiations, this country should adopt laws in the field of the fight against corruption – the Law on the High Judicial and Prosecutorial Council of BiH and Law on Courts, the Law on Prevention of Conflicts of Interest and the Law on Public Procurement.

The adoption of the above-mentioned laws was recommended as crucial already in the European Commission 2019 Opinion. They will remain one of the main conditions for Bosnia and Herzegovina to advance on the EU accession path when the decision on the candidate status is made.

The Law on Prevention of Conflicts of Interest in BiH Institutions has been in parliamentary procedure since 2017 and by all odds, it will not be adopted soon. According to the European Commission 2022 Report on Bosnia and Herzegovina, the country made no progress in adopting this piece of legislation.

Furthermore, the Commission also stated the Law on Public Procurement includes exemptions that are not covered by the EU acquis and that amendments which would further align it with the EU acquis, remain to be adopted by the Parliament.

As Nedim Hogić, a Bosnian lawyer and a Ph.D. candidate at Sant’ Anna School of Advanced Studies explains, the Law on Public Procurement was stalled because the BiH Council of Ministers avoided using the draft of the law prepared by the foreign experts, aiming instead to use its own draft.

“While the leading associations of enterprises from both entities endorsed the draft prepared by the experts, the BiH Council of Ministers kept insisting on its own draft deemed unsatisfactory by the observers, failing, in the end, to ensure at least its adoption,” he said adding that “this leaves the country vulnerable not only to risks from corruption but also to an obsolete public procurement system that lacks proper oversight.”

Hogić furthermore explains that both the Law on Prevention of Conflict of Interest and the Public Procurement Law were pieces of legislation that existed in BiH in a more robust form before 2013 when the then-ruling SDP-SNSD coalition changed them.

“Before this, there was even a solid practice concerning the oversight over the conflict of interest of politicians. In 2013, the conflict of interest became the weakest link in the BiH anti-corruption legislative framework. The introduced changes, much needed, would regulate this area in line with contemporary international practice thus making embezzlement of public funds less likely and strengthening accountability,” he notices.

According to European Commission 2022 report, no progress was made on the Opinion key priority 6 as well, requiring the country to adopt the new Law on Courts of Bosnia and Herzegovina and the new Law on the High Judicial and Prosecutorial Council (HJPC) which indicates continued insufficient political commitment to pursue key rule of law reforms.

Srđan Blagovčanin, the Chairman of the Board of Directors of Transparency International BiH, explains that the amendments to the Law on the HJPC, which were originally envisaged as “urgent measures” to ensure accountability and transparency of judicial office holders began in 2019.

“It started with forming the Working group, then by establishing the Draft of the Ministry of Justice in September 2020 to be adopted by the Council of Ministers in June 2021. Urgent measures, but not an urgent reaction of the institutions”, Blagovčanin notes.

The new Law on the HJPC should strengthen the independence, professionalism and accountability of the judiciary, and although the changes to this law are presented as the most important due to the high interest of the public in the work of the judiciary, Nedim Hogić thinks they are the least likely to produce a notable difference.

“The expectations that the model of judicial councils carried with regards to the preservation of the independence of the judiciary largely did not materialize not only in BiH but also in other countries where it was promoted by the EU. It is further strengthening that the changes introduced will not necessarily prove themselves to be very relevant,” he says.

Mahir Poljić, Project Coordinator at the Centre for Civic Initiatives says that the draft of this Law implied a minimum of improvements because it did not follow all international recommendations, but even as such it did not receive support in the Parliament.

He points out another important problem.

“On the other hand, Republika Srpska has entered the process of enacting its own law on the HJPC, which is a step towards the complete collapse of the legal order,” he says adding “that goes in the direction of creating parallel structures in the judiciary and creating complete legal uncertainty.”

What are the next steps?

Given that the need for adopting the mentioned laws is not new, the question remains whether Slovenia’s proposal will have an impact on BiH to produce changes in the legislative framework and fight against corruption.

However, Poljić explains there are many problems. He stated these laws have been in procedure for such a long time, that it is complicated to follow them.

“The Law on the HJPC, Public Procurement and Prevention of Conflicts of Interest are the most important for BiH’s further path to the EU. These laws have been prepared for a long time or have been in the parliamentary procedure for years, some of them so long that it is difficult to know how many times the texts were considered at the BiH Parliament, how many times they were returned for harmonization and refinement or what version of the law is currently valid,” states Poljić.

Blagovčanin also thinks that the situation is difficult. He explains that BiH has a very big problem with corruption and that it has been steadily deteriorating in recent years. He points out that BiH has not had an anti-corruption strategy for years while the Agency for Prevention and Coordination of the Fight against Corruption at the state level is absolutely non-functional. These problems could not be fixed only with the adoption of the mentioned laws.

“Of course, the adoption of the law alone cannot change the situation. Even the existing legal framework in BiH is very poorly respected. By putting these laws as a condition for candidate status, it seems to me that the EC is trying to get at least a commitment to fight corruption from the BiH authorities. Unfortunately, that was also missing,” concludes Blagovčanin.

How electoral reform in Albania got complicated again