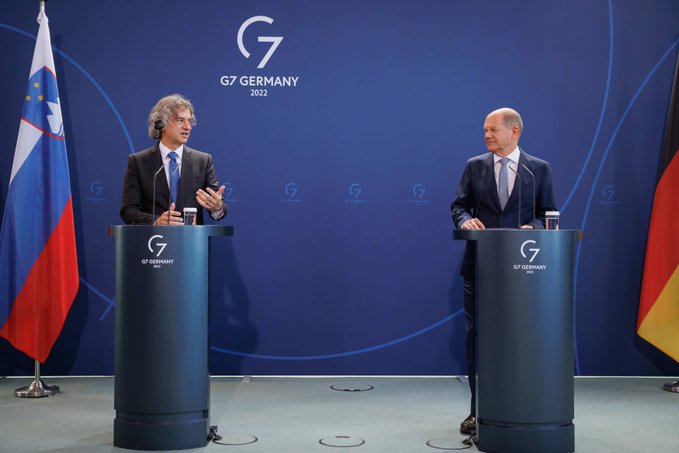 BERLIN – After a meeting with Slovenian Prime Minister Robert Golob, German Chancellor Olaf Scholz announced Western Balkans Summit in Berlin in November this year to give a new impetus to the Berlin Process.

After a meeting with Slovenian Prime Minister Robert Golob in Berlin, during which one of the topics was the enlargement of the EU to the Western Balkans, Scholz said that an agreement could be reached on further concrete steps for the European integration of the Western Balkans.

Scholz pointed out that the Western Balkans were promised a fast and realistic EU perspective in 2003, but he assessed that little has happened since then, STA reported. He said that Germany and Slovenia would like to cooperate on giving a new impetus to the accession process of the Western Balkans to the EU.

Slovenian PM Robert Golob, whose first bilateral visit abroad since assuming the mandate, said that he believes that ways must be found for the countries of the Western Balkans to take individual steps and achieve success on the road to the EU.

“Unfortunately, this process, the way it’s been done, is a process that has led to apathy in these countries because it’s too slow,” Golob said.

He estimated that the EU should focus on rewarding the Western Balkans for progress on the path to joining the EU in order to give those countries an incentive to continue pursuing that “distant and challenging goal”, according to Reuters.

He cited the energy issue as an example and suggested that North Macedonia could be allowed to participate in EU-wide energy projects as soon as the country implements all EU energy rules.