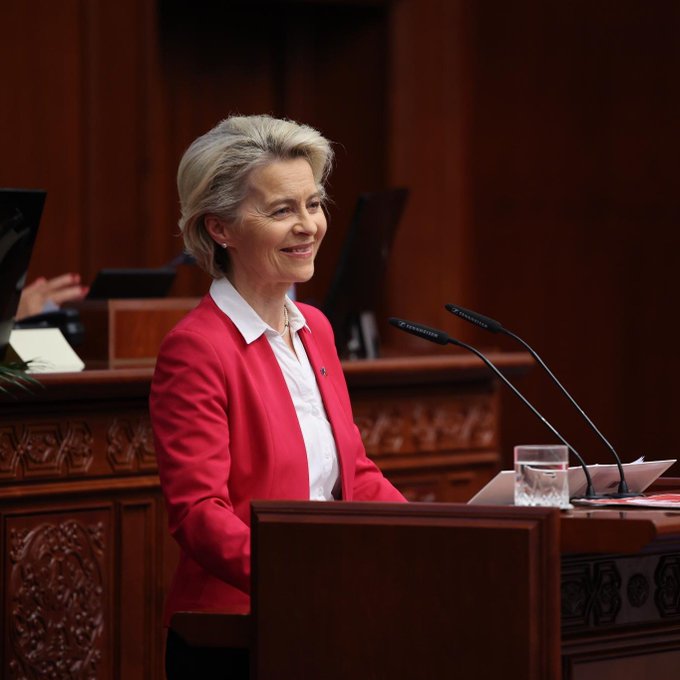 SKOPJE – President of the European Commission Ursula von der Leyen on Thursday visited North Macedonia to urge Macedonia lawmakers to back a proposal that would allow the country to start EU accession negotiations in a vote later in the afternoon, Euronews reported.

During an address to Parliament, the President of the European Commission said that the proposal by the French Presidency is “of historical importance”.

“Honourable members, many of you will be understandably frustrated that your country has not yet begun accession negotiations. I am too, ” she said, adding that if MPs backed the French proposal, European Commission will start the process of screening the acquis immediately.

“This is the first step in the negotiation process”, Von der Leyen explained and emphasised that accession negotiations start “as soon as next week”. “We are convinced that this is of historic importance. But the decision is yours to take and yours alone”, she added.

In her address to MPs, which was interrupted at several points, von der Leyen made a case for the proposal, which she said, “protects your interests and addresses the concerns of all sides. Be reassured that the Commission that has always stood beside this country continues to do so today and will continue to be there with you tomorrow and the day after.”

She also underlined that “there can be no doubt that the Macedonian language is your language. We fully respect that,” she added, triggering a round of applause and cheers from the room.

“That’s why the revised proposal refers to the Macedonian language, without qualification by the EU. The proposal also respects your national identity,” she went on.

She praised the country for its work to crack down on corruption, enhance the rule of law, and protect human rights and the rights of all communities. She also said that “benefits will accrue” in terms of foreign investments, and trade links if lawmakers agree to “opening this door” to accession negotiations.