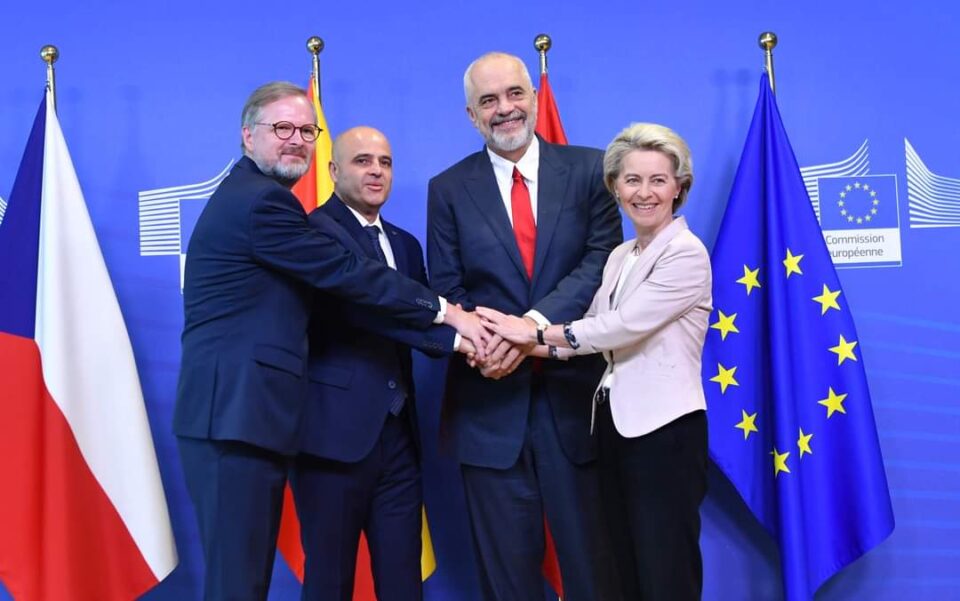 The adoption of the Negotiating Frameworks was vetoed by Bulgaria from 2020 until the acceptance of the French compromise by both Bulgaria and North Macedonia in June and July.

The EU delegation at both conferences was headed by Jan Lipavský, Minister of Foreign Affairs of the Czech Republic, and the European Commission was represented by Olivér Várhelyi, Commissioner for Neighbourhood and Enlargement. Prime Ministers Dimitar Kovačevski and Edi Rama represented their respective countries, alongside other government members.

The screening procedure, which will assess the alignment of both countries’ legal systems with the EU law, will start this afternoon, Commissioner Olivér Várhelyi announced.

For North Macedonia to make the next step in the process, it will have to change its constitution to include the Bulgarian national minority, as the French proposal outlined.

Kovačevski: Macedonian language will be one of the languages of the EU

“I would like to thank the citizens of North Macedonia. They did not give up in face of challenges. They persisted with very difficult compromises. Now, we are making the decisive step forward”, Kovačevski said.

He added that today is a historic day for North Macedonia, long-awaited and well deserved. He congratulated and thanked the citizens for their persistence and commitment.

“In order to obtain this strategic goal, we have adopted wise, patriotic decisions, there is nothing more patriotic than being committed to the prosperity of one’s country. We have adopted a decision that helps preserve Macedonian identity, language, and culture. The EU accepts us as Macedonians who speak the Macedonian language. This is ensured for good. I am convinced that after this process, citizens will emerge victorious. The Macedonian language will be one of the official languages of the European Union, without any additions or footnotes”, Prime Minister said.

Jan Lipavský, Minister of Foreign Affairs of the Czech Republic, the country holding the Council Presidency, said that today, a milestone was reached in the evolution of the EU-North Macedonia relationship, while the EU demonstrated clearly its unequivocal support for the European perspective of the Western Balkans.

“We know that the decision-making process in North Macedonia was painful and demanding, but in the end resilience, determination and true spirit remained. This would not be possible without our French colleagues who have forged a complex and difficult compromise. The EU is ready to support North Macedonia on its path to becoming a fully-fledged member of the EU and fulfilling the conditions of the accession process”, Lipavský said.

Responding to a question on the need for North Macedonia to change the Constitution, Commissioner Olivér Várhelyi said that it was clear that this step will have to take place.

“There is a clear engagement and commitment taken not only by the government of North Macedonia but by now the parliament. The French proposal entails parts of the competencies of the parliament. And this is why it was very important to hear the sovereign, the parliament, whether it is ready to engage in such solutions. And I am very hopeful that from here on, all opposition parties will work for the European future and won’t start controversies, working up emotions that are not going to take the country forward”, he said.

Rama: Negotiations are an indispensable transfer of knowledge

“Today, I hope that facts speak for themselves, the accession negotiations have officially been opened and the work towards the negotiations will start in the afternoon”, Rama said.

He described accession negotiations as “an indispensable transfer of knowledge that cannot be found anywhere else in political life”. Every step of these negotiations constitutes an added value, he added.

Jan Lipavský, Czech Foreign Minister, stressed that Albania had stood firmly by its neighbor, North Macedonia, in time of need and that today the waiting is over for both of them.

“The negotiation will take place on the basis of the General Negotiating Framework, which was presented by the EU delegation today. Albania will first and foremost need to implement reforms, in particular reforms in the judiciary, fight against organised crime, fight against corruption, fundamental rights, strengthening of democratic institutions and public administration reform”, Lipavský said.

Commissioner Olivér Várhelyi said that today marks the beginning of a new and crucial phase in our relationship.

“I want to thank the Czech Presidency and before them the French, Slovene, and Portugal presidency. Today’s historic decision sends a very powerful signal to the Western Balkans. My message to the Albanian people is that we want you in our EU family. I am confident that Albania is determined to join the EU and that it is working hard on that”, he said.

Asked about the possible accession date of Albania, Várhelyi said that “whenever we see that there is a possibility to move faster, we will move faster”.

“The Commission will not shy away from making proposals as fast as it can”, he concluded.

Opening accession negotiations for North Macedonia: A symbolic step forward with many worries

Matić: Roaming elimination in the region by 2021

EC: Further explanations needed from Hungary on decision to grant asylum to Gruevski