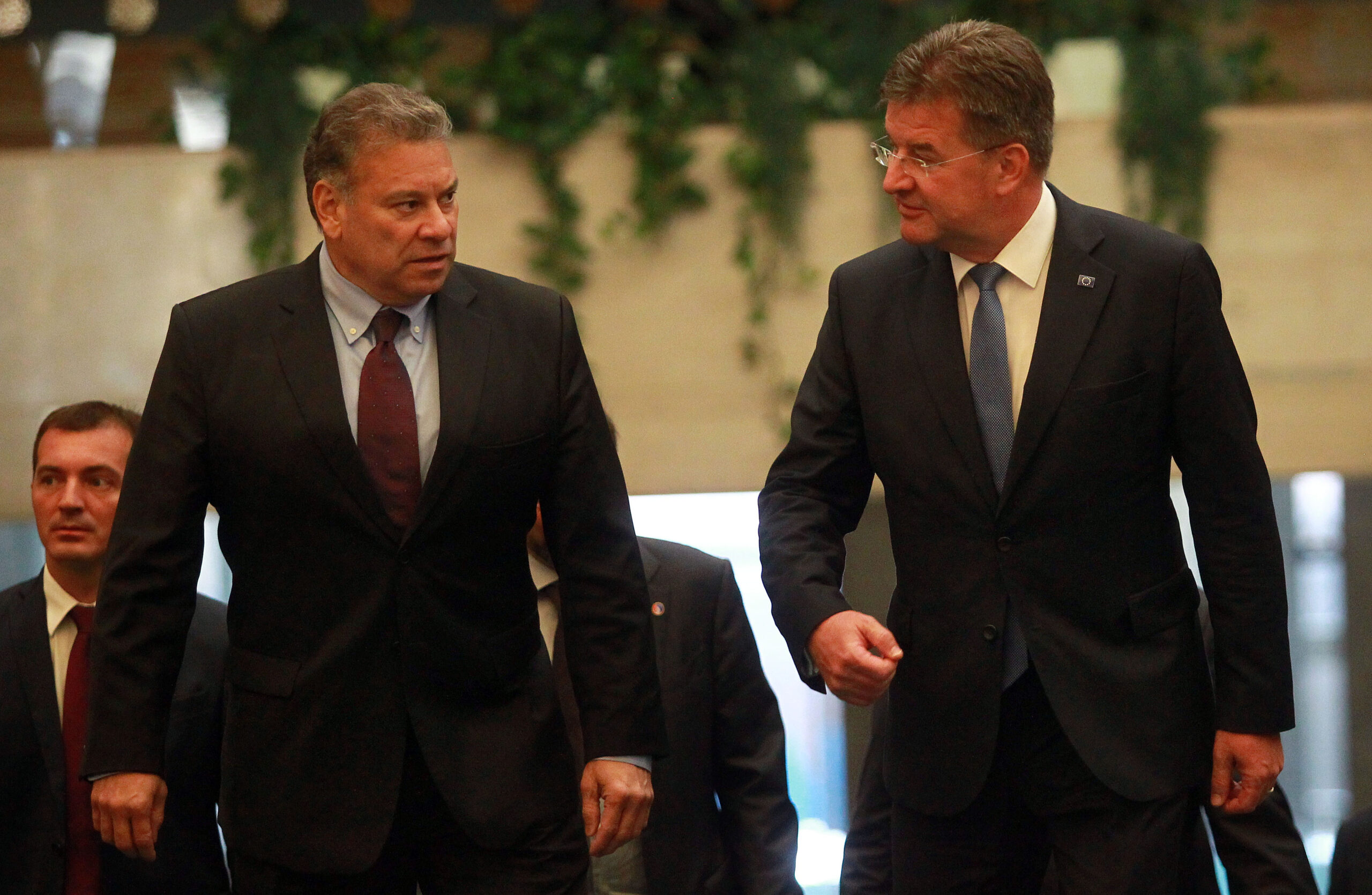 The Special Envoy of the European Union for Belgrade – Pristina Dialogue Miroslav Lajčák and the US Envoy Gabriel Escobar are visiting Serbia and Kosovo as part of the continuation of negotiations between Belgrade and Pristina, which ended last Thursday without reaching a compromise.

As they announced before the visit to Pristina, the US and EU expect concrete proposals from Serbia and Kosovo. The ultimate goal should be to prevent the escalation of the situation on 1 September, when the Government of Kosovo will start implementing measures on license plates and entry/exit documents.

Lajčák and Escobar first stayed in Pristina, where they met with the authorities and opposition parties. They said that they had a „good dialogue“ with Kosovo Prime Minister Albin Kurti and President Vjosa Osmani. Lajčák and Escobar underlined that the goal of the meetings is to prevent new tensions.

„The most important message is that I am here with Gabriel Escobar to show that the unity between the EU and the US is complete. We are working together on the normalization of relations between Kosovo and Serbia. Secondly, the international community is very concerned about what we saw on the ground on 31 July. It is expected from us together, as negotiators and from the leaders of Kosovo and Serbia, not to allow this to happen again on 31 August. That is why we are here“, Lajčák underlined in Pristina.

After Pristina, EU and US negotiators met with the representatives of Serbs from the north of Kosovo in Kosovska Mitrovica. The meeting lasted more than two hours and attracted much attention from the Serbian and Kosovo media. After the meeting with the leaders of the Serbian List, representatives of Kosovo Serbs. Underlined that the situation on 31 August can not be the same as on 31 July.

„We are here to do everything so that there are no barricades, that people can live normally“, he said. According to Lajčák, the meeting with the Serbs from the north was „very important“ because whatever decision is made, „Serbs are at the center of that decision, because every bad decision worsens their life, and every good one improves their quality of life“.

From Mitrovica, the two diplomats went to Belgrade, where they met with the President of Serbia, Aleksandar Vučić, at 5 pm. Although it was announced that a press release would be published after the meeting, Lajčák and Escobar left the Presidency building after 45 minutes. The discussion continued again after 10 pm Vučić said shortly after midnight that the negotiations would continue and that „there were no compromises regarding the license plates and some other major issues“.

EU Special Envoy Miroslav Lajčák confirmed that the talks with Vučić were difficult. He assessed that the discussion was „difficult and responsible“, adding that everything signed during the Belgrade – Pristina dialogue must be implemented, which includes the Agreement on Freedom of Movement from 2011.

After a second round of discussions late last night, I hope we are on the right track. I appreciate @predsednikrs sincere effort to support a European solution. Our talks will continue.

The Director of the Institute for Territorial Economic Development (InTER), Dragiša Mijačić, says for European Western Balkans that the visit of Lajčak and Escobar to Belgrade, Pristina and Mitrovica are part of “crisis management “, which are aimed at solving the situation with the introduction of measures by the Government of Kosovo related to freedom of movements.

“The unilateral decisions of the Government of Kosovo have caused tensions in the north of Kosovo, and it is not excluded that there may be a further deterioration of the security situation.” The visit to Lajcak and Escobar can be seen as the last attempt to resolve the situation diplomacy,” says Mijačić.

According to Mijačić, the negotiators do not have an easy task because it is not easy to find a solution that will calm the situation and satisfy the demands of both parties.

After talks with the EU and US envoys, Prime Minister of Kosovo Albin Kurti said that the Government of Kosovo would start implementing measures on license plates and entry/exit documents. He added that the implementation of the decisions was postponed to September 1 solely at the international community’s request.

On Sunday, Vučić said that Serbia had asked Brussels for “KS” plates and that entry/exit documents are not issued for Serbs from northern Kosovo with Serbian ID cards.

Dragiša Mijačić says EWB that it is ungrateful to make any predictions as to whether the current negotiations will change the situation regarding implementing these decisions, which Belgrade does not accept.

“Kurti is a tough negotiator with fairly clear views, so I don’t believe he will reintroduce “KS” plates. On the other hand, it remains to be seen whether Kurti is ready to pay the price for the broken peace and endangering the lives of police officers and citizens in Kosovo. This is an important question for the international community as well, whether they are ready to sacrifice peace in Kosovo because of Kurti’s unilateral moves”, Mijačić believes.

Given in fact that the positions of Belgrade and Pristina are almost the same even after the negotiations in Brussels when asked whether the talks mediated by the EU brought any progress, Mijačić assesses that every meeting between Kurti and Vučić brings some progress. As he says, it does not have to be in any concrete results but to bring a shift in the understanding of mutual relations.

“As part of the preparation and after this meeting, the official’s rhetoric was softened from Belgrade and Pristina. There were also positive assessments of the meeting by Lajcak and some ambassadors. Of course, the differences in attitudes are still enormous. Still, every meeting between the two leaders is better than conflicts and barricades”, concludes Dragiša Mijačić, director of the Institute for Territorial Economic Development.