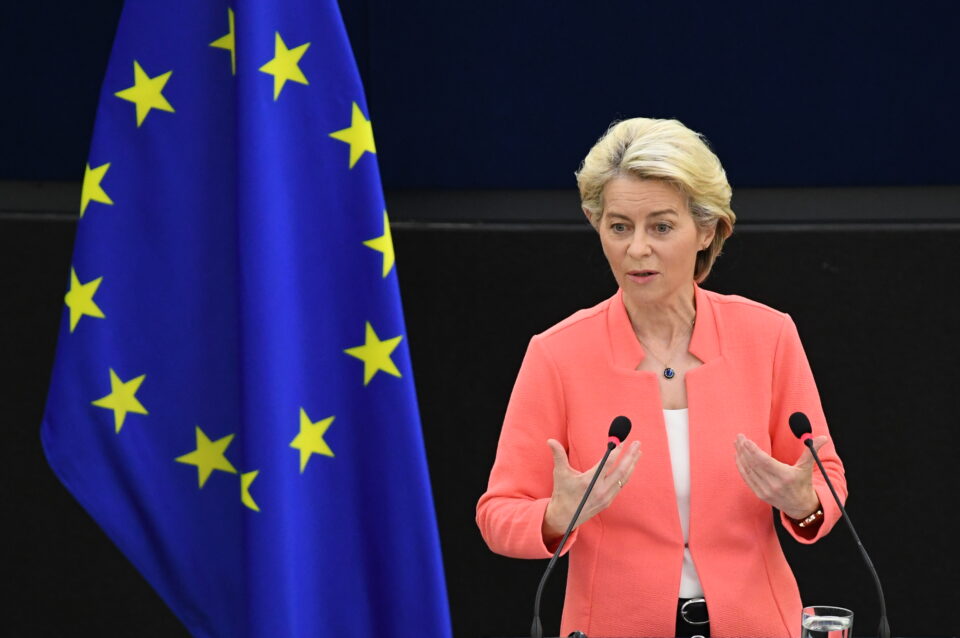 Ursula von der Leyen at the State of the Union 2021; Photo: European Union

STRASBOURG – The President of the European Commission, Ursula von der Leyen, said today during a State of the Union at the plenary session in the European Parliament that this is the moment for the EU to reflect on the strength of its democracy and gather its partners, including those who have started their path towards the EU.

“I want the people of the Western Balkans, of Ukraine, Moldova and Georgia to know: You are part of our family, your future is in our Union, and our Union is not complete without you!” underlined Von der Leyen.

She said the European Commission supports the idea of a European political community launched by French President Emmanuel Macron.

“We should strive to expand this core of democracies. The most immediate way – deepen our ties and strengthen democracies. This starts with those countries on the path to EU”, says EC President.

Von der Leyen addressed the plenary starting with the war in Ukraine. European Commission President Ursula von der Leyen announced that she would be going to Ukraine on Wednesday further to discuss the single market issue with Ukrainian President Volodymyr Zelenskyy. She also told 100 million euros for rebuilding bombed-out schools in Ukraine.

“We are in for the long haul. Ukraine reconstruction will require massive resources,” an effort likely to cost several hundred billion dollars”, said Von der Leyen. Ursula von der Leyen has stayed away from any announcements on further European weapons shipments to Ukraine — something Kyiv has asked for.

Ambassadors of leading NATO countries in BiH and Serbia: Active presence of the EU and NATO is important for the stability of the region