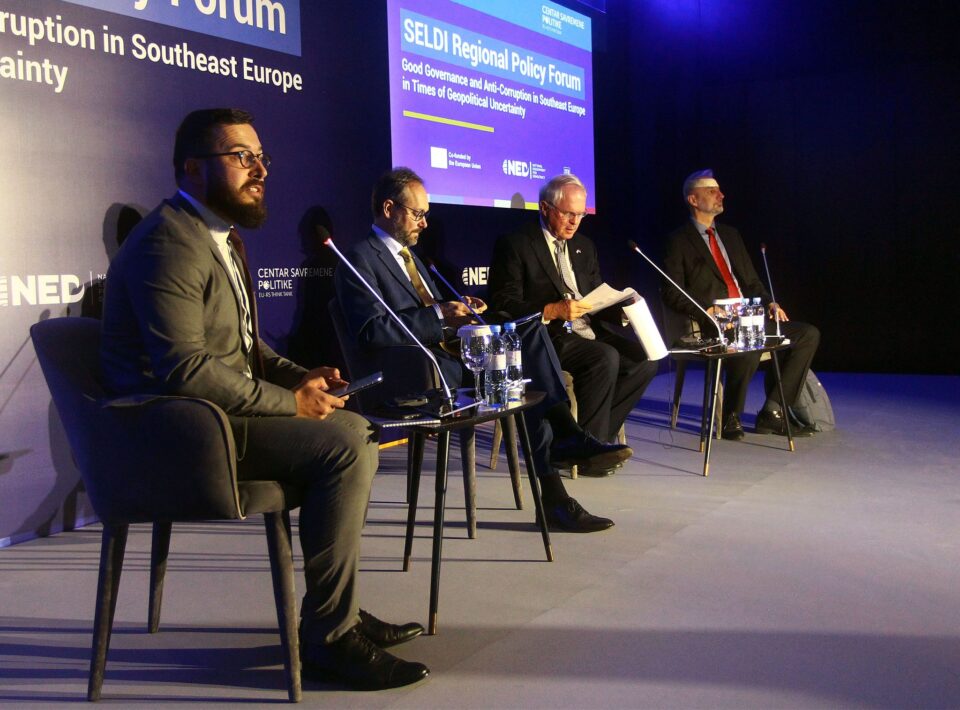 Although the European integration of the Western Balkan region has lasted for more than two decades, corruption still permeates all spheres of the region’s societies, it was said at the opening of the regional conference „Good governance and Anti-Corruption in Southeast Europe in Times of Geopolitical Uncertainty“, organized within SELDI Network.

Speaking about Serbia, he stressed that Serbia has been timid in implementing of its anticorruption strategy and advancing on anti-corruption commitments, but it can make a huge change if it focuses on a few well-identified priorities.

„We are encouraging Serbia to adopt a new national strategy with a credible and budgeted action plan, and to define its priorities in this area, in both prevention and repression of corruption. In that aim, Serbia should focus on achieving the Interim benchmarks for Chapters 23 and 24, and applying the recommendations of international bodies that closely follow this area, the foremost being GRECO’s“,  Giaufret told.

According to him, the EU wants Serbia to be part of the EU and believes we are stronger together in this complex geopolitical reality. „It will continue supporting Serbia with the pre-accession funds to combat corruption, as well as Serbia’s civil society in their role of monitoring, reporting, and working toward reforms in this area“, said Giaufret.

Christopher Hill, ambassador of the United States of America in Serbia, stressed that the US and EU have a similar position on the importance of the fight against corruption in this region.

According to Hill, the best way for protecting democracies and fighting against corruption is to inform the citizens about how to monitor and call out the cases of corruption.

He assessed that the more countries in the region come closer to EU and US standards in this area, the clearer it will be that the fight against corruption is not lost.

Deputy Head of Unit D1 (Western Balkans and Regional Strategy) in DG NEAD Anna Vezyroglou stressed during the conference that the fight against corruption and the fight for human rights are interconnected.

She assessed that the EU actively supports universal human rights, which includes the fight against corruption, but also other reforms such as public administration reform. According to Vezyroglou,  the European Union’s focus on these issues in the Western Balkans region is strong.

The program director of the Center for Contemporary Politics (CCP), one of the organizers of the conference, Nemanja Todorović Štiplija, said that the high level of corruption in the region leads to the well-known better – trapped state.

He explained that the fight against corruption and the strengthening of existing mechanisms in this field is at the center of the project, which has been implemented by 15 civil society organizations from the region for five years.

Director of Macedonian Center for International Cooperation and SELDI Coordinator Aleksandar Kržalovski stressed that SELDI Network, along with the EU assistance, for more than one decade gathered the most prominent civil society in the Western Balkans, specialized in the fight against corruption.

Slim chances for Serbia’s progress towards the EU by year’s end, relationship with Russia the biggest problem