While official results of the Bosnia and Herzegovina elections will be tabulated in the coming weeks – due to the delayed vote counting of votes from the diaspora; the Central Election Commission’s slow handling of the process; and irregularities that have delayed elections in some localities – the majority of votes have nonetheless been counted, and punditry speculating on their repercussions is abound.

The campaign season was marked by the highest political party spending to date, misuse of public funds, and nationalist rhetoric. A transitory look at campaign materials predominately provided biographical information on candidates, including marital status and number of children, in an affirmative nod to the patriarchal structure of Bosnian society, rather than their views on relevant political issues and plans for governing, with a few exceptions.

The biggest upset in the elections can be attributed to the country’s High Representative, a Dayton Peace Accords mandated position that has been embodied by the erratic Christian Schmidt since August 2021. Shortly after the polls closed, he imposed changes to the election laws, and the constitution of the Federation, one of two of the country’s entities. His actions will likely result in a cementing of politics based on ethnonationalism and will ultimately push parties in a more conservative and nationalistic direction. Rather than strengthening state institutions and helping to ensure greater transparency, his actions are an effort to stifle reform efforts that reflect a less ethnicized future for the country. This is even more tragic at a time when the appetite for the potential of a citizen-centered BiH is seemingly growing, as evidenced by protests that broke out over the summer when plans by the Office of the High Representative to impose new election laws were initially introduced.

More detailed legal analysis regarding the ramifications of the OHR’s changes will be published in the coming days, but it is noteworthy that, to ‘improve the functionality’ of the Federation, he has increased the number of delegates in the Federation’s House of Peoples from 58 to 80. Providing more seats in an already behemoth governmental structure seems an impractical solution and an unnecessary cost to impose on Bosnian citizens, considering the trend of demographic decline and the widely held assumption that BiH is already home to one of the most complicated election system in the world.

There are better democratic alternatives if more equitable representation and functionality really are the goal. By way of example, I humbly offer keeping the total to 58 seats, guaranteeing a minimum of four seats for each canton (one for each of the constituent people and one for Others) and apportioning the remainder according to population in each of the ten cantons, by majority vote, regardless of origin. It would expand the room for more liberal political engagement and proportionate representation whilst also following demographic trends. Of course, this would require a regularly scheduled Census to be carried out. The last census results are from 2013, now thought to be outdated due to the high level of outmigration. Notably, this suggestion is also not ideal, if one considers the potential of the diaspora vote, which has been underutilized and underrepresented to date. Moreover, it demonstrates that a thorough constitutional reform process, marked by inclusive deliberation, is sorely overdue in the country, rather than the imposition of changes from above on an individual basis. The EU Delegation in BiH’s tepid acknowledgement of the High Representative’s decision signals there is not universal approval of the actions among the international community, as has been voiced by members of the European Parliament over the last couple of days.

The re-election of Željko Komšić over his ethnonationalist HDZ opponent Borjana Krišto as the Croat member of the country’s Tripartite Presidency, cements him as having the strongest political brand in the country. Denis Bečirević will be a newcomer and the first Social Democrat in the role of the Bosniak member of the Presidency. His gaffes during the campaign set low expectations, but also the potential for success should he surround himself with an astute team in terms of governing now. As a coalition candidate, this will be interesting to watch, and the strength of the coalition parties that settled on him as a candidate will become evident in the negotiation processes that characterize forming the governments over the coming period. The allocation of ministerial posts in the Council of Ministers will be particularly important to watch, considering its executive function and importance for the governability of the country as a whole. Željka Cvijanović, of the ethnonationalist SNSD party, will fill the Serb seat of the Presidency, promising continuity in terms of obstruction. This includes an incongruous approach to representing the country by peddling secessionist politics both internally and externally, much like her party president Milorad Dodik did previously.

Bosnia and Herzegovina’s resilience, considering its dysfunctional political set-up, remains impressive and a testament to dedicated, quiet individuals in various governmental functions that persist and the voters that support them. Without undermining continued political threats and challenges domestically and internationally, it remains a pity there is no late-night satirical news program in Bosnia and Herzegovina to help citizens distill the news of the day. Such programs are widely popular in neighboring countries, not to mention across Europe and the United States. They offer an alternative voice in the media landscape, highlight efforts of political activism and reform attempts, and in the case of Bosnia and Herzegovina, would raise the profile of Bosnians’ impeccable sense of dark humor – regardless of belonging.

Relatedly, these elections represent the lowest voter turnout since 2004. This mirrors citizens’ broader disenchantment with the various transitions the country has undergone since the 1992 – 1995 conflict. A rearticulation of the process of social and political transformation of the country in the coming decades is imperative. Ensuring reports of election fraud are adequately investigated, providing electoral reform, forward movement in terms of EU integration, combatting corruption, and providing viable plans in terms of economic growth and infrastructure would demonstrate a more capable approach by those (newly) elected to office and should be what citizens hold them accountable for over the next four years. Productive collaboration with reform actors, including civil society and the international community, rather than autocratic actions by the OHR, must be encouraged by Bosnia and Herzegovina’s allies. After all, democracy is, if nothing else, very demanding, and certainly a team sport. 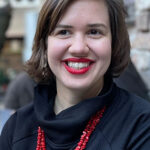 Migration scholar at the University of Salzburg. Her academic interests are in political sociology with a focus on migration, transnationalism, diaspora, education, remembrance, transitional justice, and the Balkans. She consults with local and international organizations focused on diasporas and development, returnees, education, social entrepreneurship, and civil society.