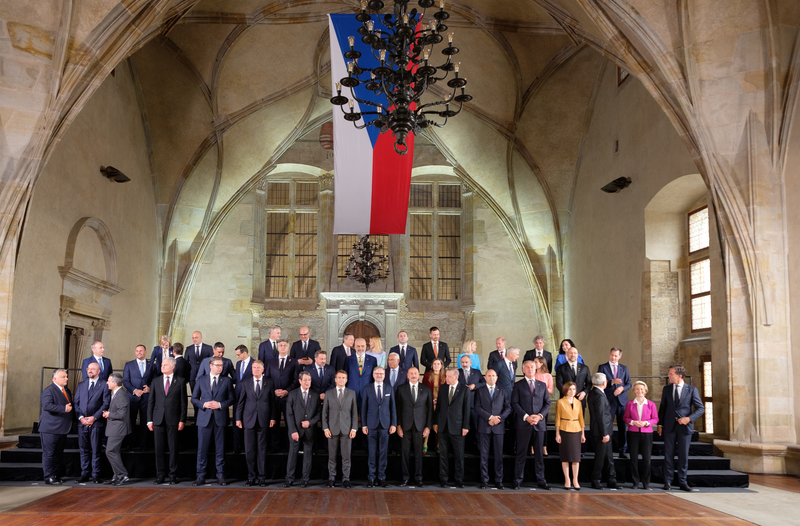 PRAGUE – The inaugural meeting of the European Political Community takes place on Thursday, bringing together leaders from 44 countries of the continent.

The new pan-European grouping was an initiative of French President Emmanuel Macron, who sees it as an opportunity to structure dialogue on an equal footing between EU members and non-members on issues that confront them all. The EPC includes countries from the Western Balkans, the United Kingdom and nations on shores stretching from the Caucasus to the North Sea and the Mediterranean.

Although no formal conclusions will be adopted at the meeting, French President Emmanuel Macron said he hoped the group could undertake “common projects”. With Europe facing high energy prices, Macron said a priority was to establish more electricity connections between countries.

German Chancellor Olaf Scholz said the event was an opportunity to improve EU relations with its neighbors, including those undergoing in a long accession process to join the bloc. “This is good for peace, for the security order. This is good for economic development and for prosperity,” he said.

He warned that the summit of 44 heads of states and governments of Europe that started in Prague can not ignore the Russian attack on Ukraine and that it is good to see how everyone is helping Ukrain both financially and with arms deliveries.

Scholz also emphasized that it is necessary for the whole of Europe to provide aid to households and businesses in solidarity in the energy crisis and to support the European strategy for reducing energy prices.

Prime Minister of the Czech Republic Petr Fiala opened proceedings by saying the meeting was not meant to be a replacement for existing alliances, but an inclusive forum for “honest discussion” on the future of Europe.

“The whole of Europe is meeting in Prague today to discuss what we can do together to restore peace, boost cooperation and return prosperity,” he said. According to him, Europe has many difficult problems and leaders met in Prague to discuss solutions.

On Europe Day 2022, the French President, Emmanuel Macron, proposed to create a European Political Community, a framework that should foster cooperation with like-minded non-EU European partners in areas such as security, energy, transport and infrastructure.

Although he stressed right from the outset that the EPC’s aim would be to ‘complement’ and not to substitute the enlargement process, the proposal evoked mixed reactions in the Western Balkans and wariness in Ukraine.

Touring the Western Balkans in the following weeks, President Michel championed the proposal, stressing that its aim was ‘not to replace the EU accession process’ but to allow ‘immediate political integration’ and ‘regular political dialogue among leaders. President Michel then coined the term ‘European geopolitical community’, placing foreign policy cooperation at its core and suggested that participating states should ‘meet at least twice a year at leaders’ and ministers’ level.

Preliminary reflections on the Bosnian elections

Serbia and Kosovo fail to agree over car plates issue

Vučić and Thaçi at the Munich Security Conference this week