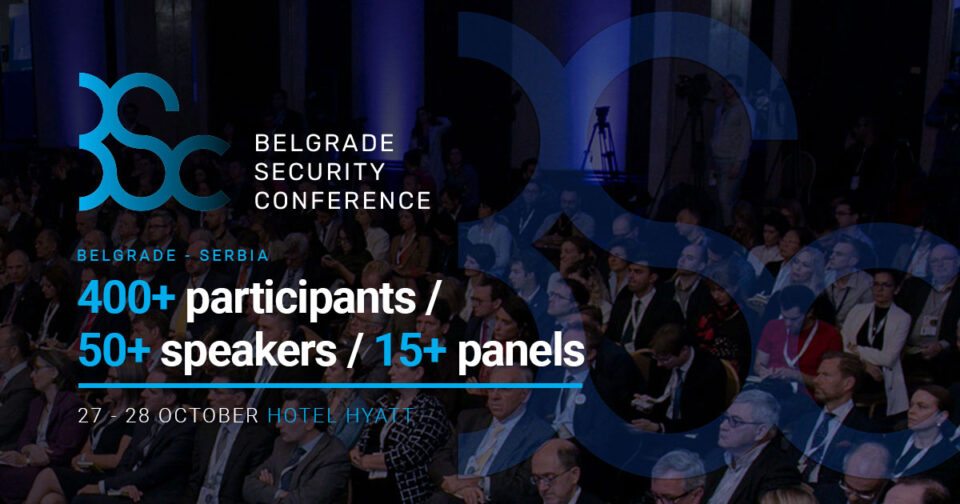 BELGRADE – A new regional conference, The Belgrade Security Conference (BSC), is scheduled for 27 and 28 October 2022 in Belgrade, under the auspices of the Belgrade Centre for Security Policy (BCSP) with the title Authoritarianism as a Cause of War and a Duty to Resist.

During the two-day Conference, we will start a dynamic discussion on the complex challenges that Europe and the world are currently facing, such as the war in Ukraine, the future of the EU, the fight for democracy, cyber security, energy dependence, the fight against organized crime and disinformation.

The participants of this year’s Conference will be addressed by this year’s laureates of the Nobel Peace Prize – Uladzimir Vialichkin, representative of the Human Rights Centre Viasna from Belarus, and Anastasia Garina, executive director of the Russian human rights organisation Memorial. The importance of brave individuals and civil society organizations in the fight against authoritarianism was also recognized by the Nobel Committee, which announced that this year’s laureates of the Nobel Peace Prize represent civil societies in their countries and demonstrate their importance for peace and democracy. The values that these organizations are fighting for are the values that the organizational team of the Belgrade Security Conference also stands for, and through discussions, we want to highlight their importance for the world we live in.

The Belgrade Security Conference provides space for brave thinking and honest dialogue with European and Balkan leaders, researchers, academics, activists, diplomats, and current and former politicians. During sixteen panel discussions, BSC will gather over 80 panelists from over 20 countries worldwide.

Ambassador and Head of the Delegation of European Union to the Republic of Serbia, H.E. Emanuele Giaufret, will open a panel dedicated to the impact of the war in Ukraine on EU enlargement policy. The panel titled EU Enlargement in New Geopolitical Circumstances: How to Use the New impetus? will be moderated by Nikola Burazer, Programme Director at the Centre for Contemporary Politics and Executive Editor at European Western Balkans. The discussion will focus on the importance of the Western Balkans for European security in light of new security challenges, as well as on the political will of the EU member states to use the new impulse in the enlargement policy and speed up the accession process of the Western Balkan countries.

Will the new geopolitical circumstances indeed speed up EU enlargement in the Western Balkans? What should be done to make the process more efficient and successful? These and other related questions will be answered by Luka Šterić, Researcher at the Belgrade Center for Security Policy, Srđan Majstorović, Chairman of the European Policy Centre – CEP Governing Board, as well as Yvette Szepesi, Coordinator of European Neighbourhood and Enlargement Policy at Netherlands Ministry of Foreign Affairs, and Member of the European Parliament Klemen Grošelj.

During the first day, there will be discussions about authoritarianism in the EU and in the Western Balkans and the challenge it represents for democracy. The discussion during the panel The EU’s Own Illiberal Challenge: Authoritarians in the House and the Backyard will be moderated by journalist Una Hajdari, who will discuss illiberal political systems in Europe, their future, as well as their importance for citizens and enlargement policytogether with the panelists. They will include Milica Delević, Director for Competitiveness, Governance and Political Affairs at the European Bank for Reconstruction and Development, Natacha Kazatchkine, Head of the EU internal policy team for the Open Society Europe and Eurasia Program, Selim Koru, Fellow of the Foreign Policy Research Institute and Zsuzsanna Szelényi, Director of the CEU Democracy Institute Leadership Academy.

The second day of the conference will offer an overview of many relevant security issues, such as the fight against disinformation, cyber security, organized crime and the relationship between Serbia and Kosovo.

Another important topic that will be discussed during the second day is the position of human rights defenders, during the panel Human Dimension of Security in the Western Balkans – Is There a Protection for Human Rights Defenders?The harassment, threats and intimidation faced by human rights defenders in the Balkans will be discussed by the participants of the panel moderated by Jovana Spremo from the Lawyers’ Committee for Human Rights (YUCOM).

The complete agenda of the Conference with the list of confirmed panelists is available at the following link: https://belgradesecuriticonference.org/agenda/.

Fighting high-level corruption in the Western Balkans: Is the region moving forward?