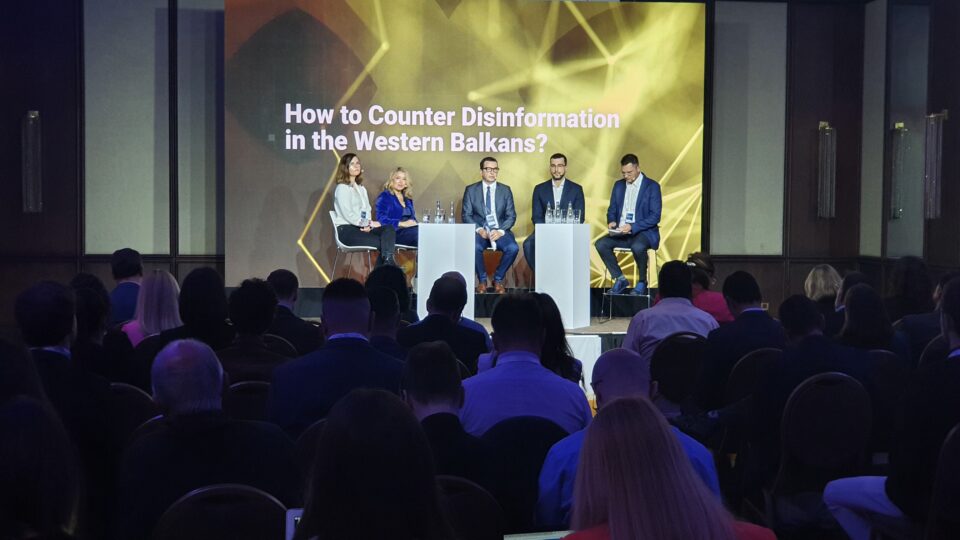 BELGRADE — In order to fight the spreading phenomenon of disinformation and information manipulation, a broad coalition of different actors is needed, as was concluded by the participants of the panel “How to Counter Disinformation in the Western Balkans?” during the second day of Belgrade Security Conference (BSC).

These actors include the EU, civil society, journalists and governments, but most importantly — educated and active citizens. The panelists agreed that the age of social media brought new challenges that require a coordinated response, especially considering the speed in which information is shared nowadays and the questionable accountability of privately owned social media.

As mentioned by the moderator of the panel, Marko Milosavljević, professor of journalism at the University of Ljubljana, another pressing issue in the Western Balkans is the problematic role of governments in information manipulation.

Jasna Jelisić, Head of the Western Balkans Task Force in the Strategic Communication Division of the European External Action Service, stated that the European Union was the first major actor who took steps in the area of countering disinformation and it did so at the request of its Members States. Important milestones in this field were the adoption of the EU action plan against disinformation, European Democracy Action plan and the Digital Services Act.

“Disinformation and information manipulation are being used to undermine the European project and major EU policy in this particular region, which is enlargement policy. If you expect this problem to be taken care of by the EU alone, it will not happen because it cannot happen. For us to succeed with all this, we need citizens, civil society partners, and we need governments who engage,” Jelisić explained.

When it comes to the Western Balkans, Jelišić said that the most useful tool for the countries in the region to advance in this area is the accession process, which provides precise framework for advancing democracy, which cannot be done without ensuring freedom of the media.

Analyst of the Digital Forensic Center, Milan Jovanović, followed up on the point about EU’s need for partners in countering disinformation by saying that countries who spread disinformation also need local partners to do what they do. Jovanović also warned that fact checking isn’t that useful because people already “dug themselves deep inside the trenches” and “believe what they want to believe.”

He also mentioned the importance of social media in changing the way information is shared. Fake accounts are one of the main problems with the social media and there have been many examples of such coordinated behavior in the social media in Serbia and Montenegro. Jovanović and other panelists agreed that social media do not tackle this issue properly.

“Facebook is good at deleting those accounts, but it’s also good at keeping the money earned by their activity,” Jovanović stated.

Marko Milosavljević drew attention to another important issue when it comes to social media — that they are not public, but private media, so their owners determine their policies.

Anastasiia Romaniuk from Civil Network OPORA offered a perspective from Ukraine. She explained that Russian influence in Ukraine through the media had to become more subtle after 2014 and it operates through various proxies. However, the field where it’s the most difficult to fight against disinformation is the social media because there are no preemptive measures or effective tools in place.

“Coordinated behavior is a huge problem, but for small markets like Ukraine, it takes a lot of time, stubbornness and pressure to deal with that. You cannot treat EU as a cure, the work has to be done by ourselves,” Romaniuk explained and added that the pressure worked, so the major social media are now more responsive even to small markets.

Program Director of CRTA, Raša Nedeljkov, explained that in Serbia the most influential media who spread disinformation and manipulate information are sponsored by the state. He shared examples of TV stations such as Happy TV or Pink TV, but also the publicly owned RTS, which is more subtle in its messages than the aforementioned ones, but still pushes an anti-EU narrative which was demonstrated in a research by CRTA.

“We don’t have a national public broadcast service providing critical information about important political of social events,” Nedeljkov warned. He also added that the main purpose of disinformation in Serbia isn’t to undermine the EU, but to present the ruling party as the “only relevant actor for solving the problem.”

European Commission on media funding in the Western Balkans: Political influence and lack of transparency remain an issue