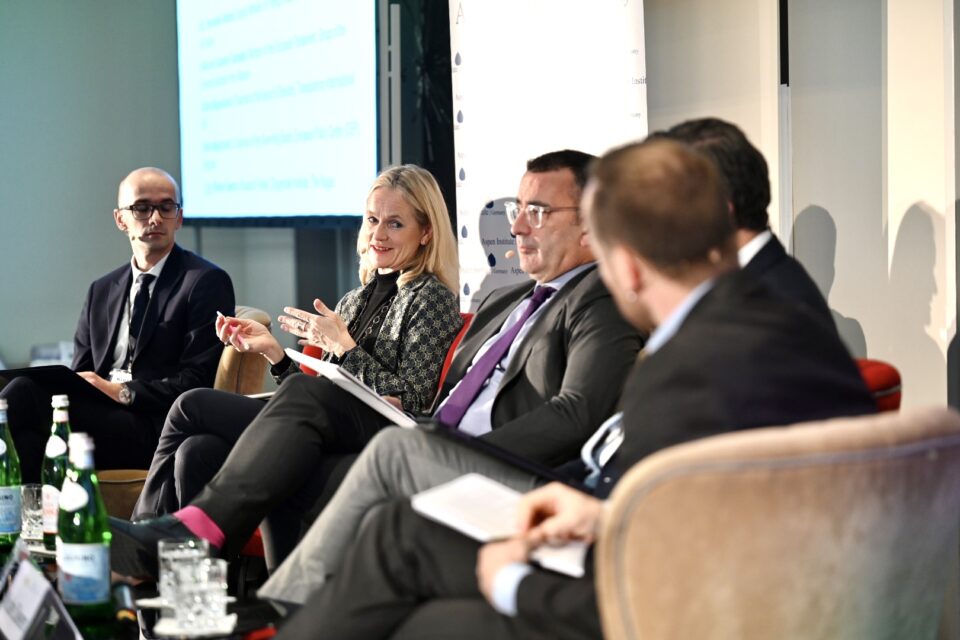 BERLIN – The EU should prevent the further downgrading of democracy, fundamental rights, and the rule of law principles in assessing the progress of aspiring countries, it is one of the recommendations developed by civil society leaders from the Western Balkans created within the Civil Society and Think Tank Forum in Berlin.

The civil society representatives from the Western Balkans said that the EU should reject the concept of „stabilocracy“ or any other than objective fulfillment of EU values and standards, pursuing a strict, but consistent conditionality policy.

In the recommendation linked with EU integration and changing geopolitical environment, CSOs urge that the EU should revise the bilaterally imposed conditions by EU member states on Western Balkan countries in the accession process, which are „undermining EU values“ and prevent such misuse of the enlargement process in the future.

„Set an indicative target date for EU accession of the WB countries – 2030, which would increase the cost of non-enlargement and non-compliance, accompanied by a clear conditionality framework focused on major political issues and challenges in the region, while respecting the merit-based principle for each country individually“, civil society representative recommended.

According to these recommendations, the EU also should take decisive action in supporting the promotion and protection of fundamental rights by conducting comprehensive scrutiny of the implementation of policies, especially in the area of women rights, LGBTI, Roma, and regarding persons with disabilities.

Regarding recommendations for the Western Balkans Governments, CSOs said that the WB government should take resolute actions for accelerating the pace of EU-related reforms; end the politicization of the institutions and the administration and eliminate clientelism. The WB should “substantially implement commitments to improving fundamental rights, including rights to persons who belong minorities, especially of LGBTI persons”.

The CSOs stressed in the recommendations the importance of involving civil society systematically in all phases of EU accession reforms, with participation mechanisms that are accessible and based on trust, transparency and accountability, providing long-term support and dedicated resources.

Kreshnik Ahmeti, Deputy Minister of Foreing Affairs and Diaspora of the Republic of Kosovo, said during the panel “Promoting Rule of Law and Fighting Corruption” at Civil Society and Think Tank Forum in Berlin, that his country made progress in the EC Report for 2022. He underlined that this is the first report in which there is no area with “no progress”.

Ahmenti told that it is clear that “a lot of job shoul be done in the future”, adding trends are positive, which is important. According to him, the Government had positive results in fight against corruption and organized crime.

“Over 2,000 people were arrested for organized crime and corruption in the past year. During the year and a half, 69 criminal groups that operated on the territory of Kosovo were destroyed,” Ahmeti said.

He announced that the future steps of the Kosovo authorities are aimed at reforms in the judiciary because the fight against organized crime and corruption is not possible without an independent judiciary.

Member of the European Parliament Viola von Cramon-Taubadel underlined that the rule of law is the pillar of the EU accession process. She said that Kosovo is currently an example in the region how country could make a shift, if there is political will and if politicians place reforms high among their priorities.

Speaking about the rule of law in the region and the fight against corruption, she pointed out that the picture in the region is different, because in some countries there is a huge backsliding but also “fake reforms” that exist only on paper, but not on the ground.

Von Cramon assessed that it is difficult to force political leaders in the region to undertake reforms if there are no sanctions.

“I am pro-enlargement, but I believe that we need to remind our friends from the region that our tax-ayers asked us for the money”, she said, adding that some countries such us Serbia are capture, without independent media and judiciary which is need to be clearly communicated from EU side.

Srđan Blagovčanin, Chairman of the Borad of Directors of Transparency International BiH, assessed that the establishing and strengthening rule of law in the region are the most complex part of the EU integration process.

“Substantial progress in these areas needs real transformation of political system and societies, limitation of power, protecting human rights”, he said adding that countries in the region have adopted laws, institutions but without results on the ground.

Blagovčanin said that the EC recommendation for candidacy status for BiH is a good news, adding that the same EC in report for Bosnia stated that there is no progress.

“You don’t need to be an expert on Bosnia and Herzegovina or enlargement policy to conclude that recommendation on candidate status is not based on merit-based criteria”, Blagovčanin told. He mentioned that of the 14 priorities defined by the European Commission in 2019 for candidate status, BiH fulfilled only two.

Srđan Majstorović, Chairman of the Governing Board at European Policy Centre (CEP) from Belgrade, said that the message of the President of the European Commission during her visit to Belgrade is very disappointing because, according to the EC report led by Urusla von der Leyen, Serbia has not progressed since 2016.

He assessed that the authorities in Serbia are not doing enough to meet the criteria required for EU membership.

“The situation in Serbia when it comes to prepareness for membership is worse than 10 years ago. The division of power is not visible, the political system is corrupt, we do not see where political influence on the judiciary begins and where it ends,” said Majstorović.