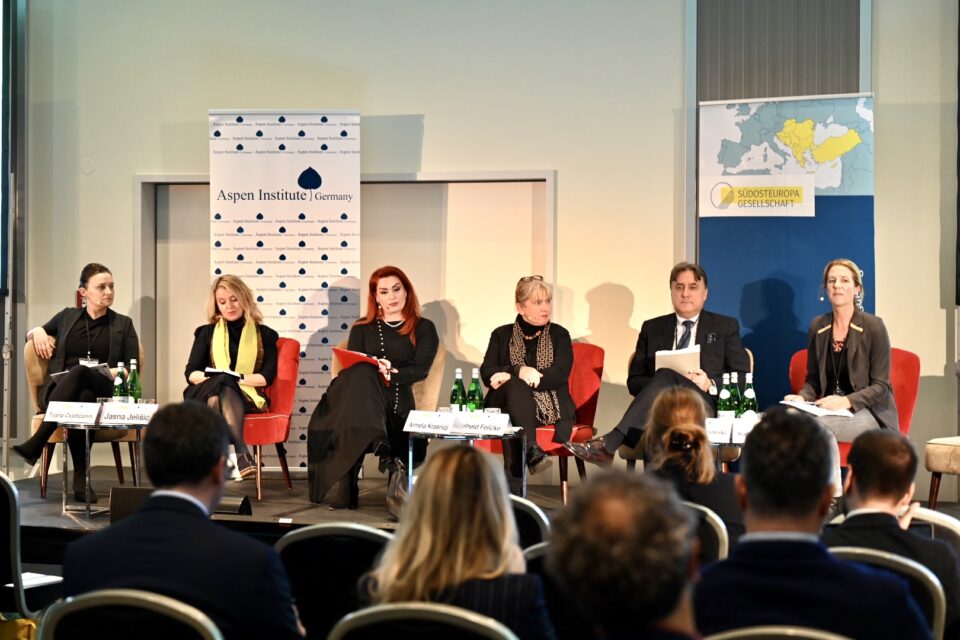 BERLIN – EU and the International Community should put media freedom high on the list of priorities for Western Balkan countries in the EU integration process, it is one of the recommendations developed by civil society leaders from the Western Balkans created within the Civil Society and Think Tank Forum in Berlin.

The CSOs stated that the media freedom topic should be included in the Berlin Process as an initiative for Western Balkans governments to sign a commitment to implement recommendations related to media freedom.

The EU and the International Community should communicate local information needs with massive online platforms. In their recommendations, Civil Society representatives stated that it is necessary to make state efforts in fighting disinformation a criterion when assessing progress in media freedom within the EU accession process, Chapter 23 on freedom of speech plus Chapter on Media and Information Society.

According to recommendations, the EU should design new instruments to monitor and assess media freedom, such as special reports on media freedom, like the ones for Chapters 23 and 24.

Regarding recommendations for the Western Balkans Governments, the CSO stated that they should discontinue practices that jeopardize media freedoms, particularly those that target journalists and independent media.

It is also stated that the governments should strengthen the capacity, independence, and accountability of regulatory bodies, as well as put forward communicators with expertise and integrity to represent official sources and the public sector. CSO representatives underlined the importance of making media literacy a part of the curriculum in formal education from the youngest age.

„Withdraw public funding from media outlets that are not credible, ethical, and do not abide by professional standards. Promote the same policies with other stakeholders“, stated in the recommendations.

Tijana Cvjetićanin, Editor in Chief of Raskrinkavanje from Sarajevo, presented CSOs recommendations during the panel “Information Disorder in the Western Balkans” at the Civil Society and Think Tank Forum in Berlin.

She underlined that media capture and lack of media freedom are the main conditions for spreading disinformation in the Western Balkans region. She explained that political influence comes from governments.

According to her, that is why it is necessary for the EU to insist more on media freedom issues in the process of accession of the Western Balkan countries.

She assessed that government incentives are very present in the regional media landscape, pushing media from professional reporting to sensational. “All of this is not driving environment for journalism”, said Cvjetićanin.

Cvijetićanin explained that the influence of third parties on disinformation in the region is not great and that it is very difficult to determine when disinformation comes from outside and when local actors spread disinformation.

Jasna Jelisić, Head of the Western Balkans Task Force in the Strategic Communication Division of the European External Action Service, explained that the EU had taken a large scope of actions to tackle with this information.

She assessed that for the EU is very important to understand what is happening in the region, which is why cooperation with local actors is crucial for the European Union.

“On that basis, it is important to support local actors who will unpack the problem in the local environment. We need many local disinformation studies”, Jelisić said.

Jelisić explained that it is impossible to stop the spread of misinformation and that the only thing the EU and the region can do together builds resilience.

Adelheid Feilcke, Director of Programs for Europe at Deutsche Welle, assessed during the panel that the people in the Western Balkans are still frustrated about their countries’ situation, which is why many young people leaving. She stressed the importance of solution-orientated journalism as an approach that helps and empowers younger generations.

Feilcke underlined that cooperation with journalists and media outlets in the region is essential for strengthening and building resilience.

“Disinformations, fake news, threatening journalists are happening daily in the Western Balkans. We have considered that international partnership and cooperation is very important”, she said.

Amela Krasniqi, Chairwoman at Audiovisual Media Authority – AMA from Tirana, stressed that propaganda is essential to all misinformation that spreads in the Western Balkans region and beyond.

During the panel, she spoke about positive examples of regional media cooperation in the fight against disinformation. She cited the example of the Declaration from Tirana, which was signed by many journalistic agencies from regional Southeast Europe. She assessed that such cooperation is one of the key ways in the fight against disinformation because the media transmit false news to each other.

The Civil Society Forum is organized by Southeast Europe Association together with the Aspen Institute Germany and it is “designed as a public presentation of the results and key recommendations elaborated by think tanks and civil society organization at the workshop and a public discussion with decision-makers from the Western Balkans region and the EU”, while also providing a platform for networking and exchange of best practices among the members of Western Balkans civil society and their colleagues from the EU.