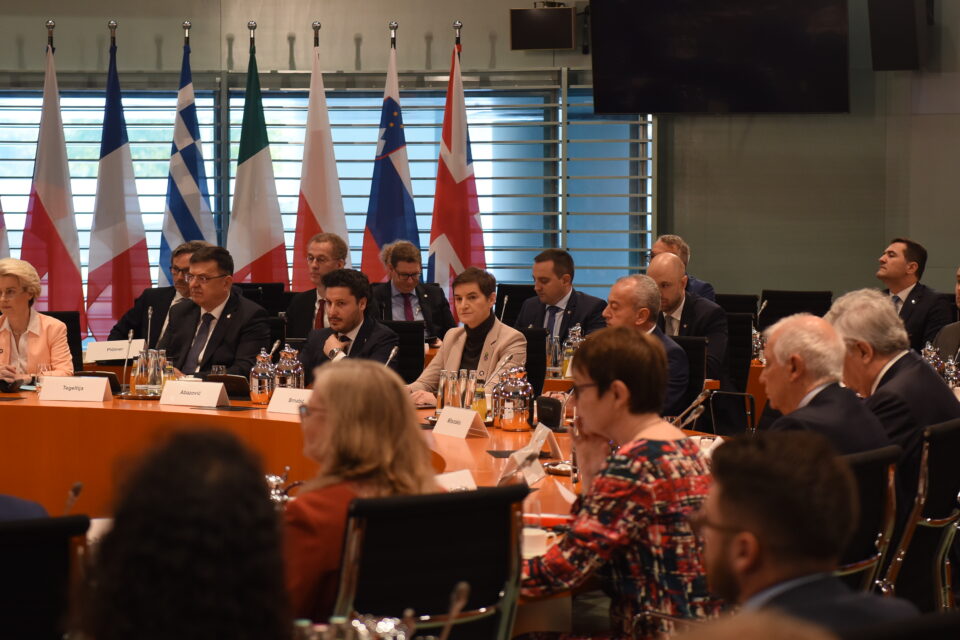 BERLIN – The leaders of the six countries of the Western Balkans have signed in Berlin the agreement on the mutual recognition of identity cards, which provides for free movement, recognition of university degrees and professional qualifications. The Summit of the Berlin Process chaired by German Chancellor Olaf Scholz.

“It is time to overcome regional conflicts, which have kept you divided for a long time, and the process of normalization of relations between Kosovo and Serbia must be accelerated,” German Chancellor Olaf Scholz said today at the opening of the Berlin Process Summit, stating that Europe is not complete without six countries Western Balkans

Scholz, in addition to the request to speed up the Kosovo-Serbia dialogue, appealed for the talks to yield concrete results, reports Albanian media.

According to him, the Berlin process will advance the integration of the Western Balkans into the European Union.

“Together we protect European values. Your membership is in our interest. The promise of Europe’s future is our duty to make it a reality. That’s what brings us all together here. I’m glad to see that this vision is similar for all of us,” said Scholz.

According to him, with the three agreements, three major steps will be taken that will make life easier for the citizens of these six countries.

“A Common Regional Market (CRM) will boost the economy and investments in your region.” The agreements will allow your citizens to cross borders only with identity cards, and we will make sure that students from Sarajevo finish their studies in Belgrade, or architects from Tirana get a job in Skopje. It aligns you with European standards,” he added.

The meeting with the leaders of the Western Balkans was also attended by the European Commission Ursula von der Leyen and the President of the European Council Charles Michel.The participants of the summit emphasized the desire to continue the Berlin Process in order to use the full potential of improved and inclusive regional cooperation and agreed that the next summit within the framework of the Berlin Process in 2023 will be held in Albania, the RCC announced.

The High Representative of the European Union for Foreign Policy and Security, Josep Borrell announced today on Twitter that he had a good meeting with the Prime Minister of Kosovo, Albin Kurti, ahead of the meeting of the Berlin Process, and that they stated that the agreements from the dialogue with Belgrade must be respected.

Discussed the situation in north of Kosovo. Disruptive actions, such as burning of cars, are unacceptable

Dialogue agreements must be respected. Call on all to act with restraint

He said that the agreements from the dialogue must be respected and called on everyone to exercise restraint.

During this meeting, Kurti said that the attacks on Serb cars in the north should be condemned by everyone.

“Before today’s Summit, I met with Josep Borrel and Miroslav Lajčák to discuss the Framework Agreement focused on mutual recognition and other issues. The looting and burning of cars in the north of Kosovo is a crime and must be punished by everyone,” Kurti wrote on Twitter.

Rama: It is important that everyone is involved

Prime Minister Edi Rama said in Berlin that WB feel that are not alone nor left out  recalling Ursula Von der Leyen’s tour in the Balkans, which, according to Rama, brought with it not only beautiful words of solidarity, but also important financial support

The Albanian Prime Minister said that they hope to see developments in the digital sphere, taking into consideration the aspect of the cyber crisis, Albanian Daily News reported.  According to Rama, what was signed today is very important. He emphasized that the question of how to integrate as soon as possible has been raised again.

“I can’t help but emphasize that these agreements were three agreements that we had been looking forward to for two or three years, they were blocked,” said the Prime Minister.

He said that the chancellor and the German team worked very hard in the realization of the three agreements they had within the framework of the Open Balkans. Rama said it was important that everyone was involved.

“It sounds a little strange or alienating for Kosovo that while they made an agreement on identity cards to move freely they cannot move in the EU and I look forward to this being resolved as soon as possible,” he said. the prime minister.