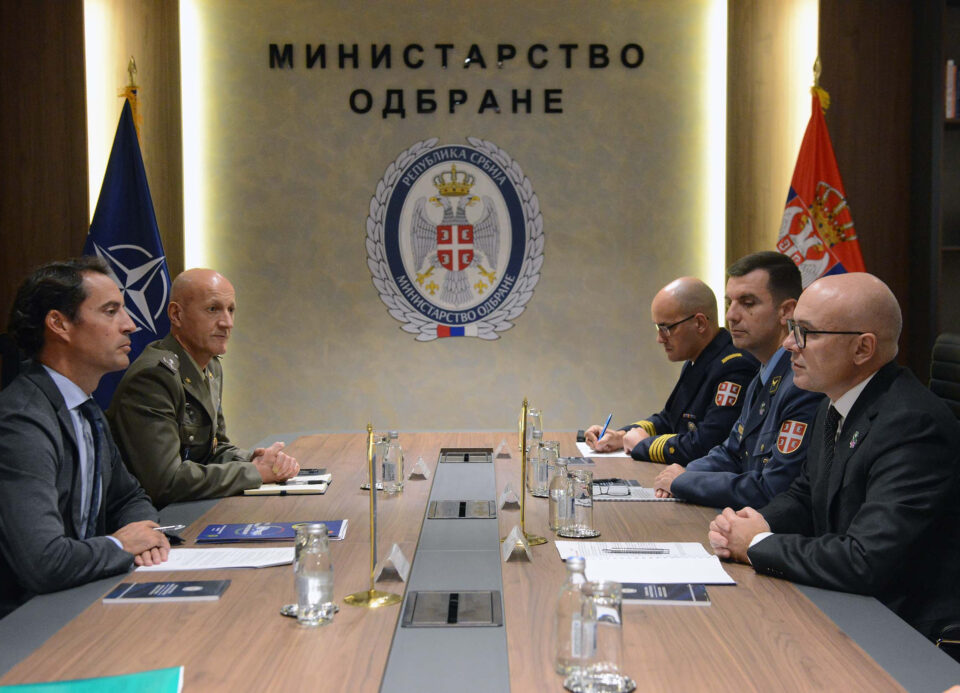 Photo: Ministry of Defensc of the Republic of Serbia

BELGRADE, SARAJEVO — Deputy Assistant Secretary General of NATO for Political Affairs and Security Policy, Javier Colomina, visited Serbia and Bosnia and Herzegovina at the beginning of November. The purpose of the visit was to strengthen NATO’s political dialogue with these two countries. In Serbia, Colomina said that NATO respects its military neutrality, as well as that KFOR will continue to maintain peace and security in Kosovo within its mandate, while in BiH he welcomed the recently adopted reform programs for 2021 and 2022, which will strengthen BiH’s cooperation with the Alliance, and added that NATO will continue to support the territorial integrity and sovereignty of BiH, which is key to stability in the region.

At the meeting held at the Ministry of Defense of the Republic of Serbia, Colomina and Vučević discussed the partnership and cooperation between Serbia and NATO, as well as the role of KFOR in the situation in Kosovo. Vučević emphasized that Serbia’s strategic commitment to military neutrality “did not pose an obstacle for cooperation with the NATO,” while Colomina confirmed that NATO respects the commitment of Serbia, an important partner in preserving security in the region.

When it comes to Kosovo, the minister expressed concern about the recent events and said that he expects KFOR to act “impartially” and in accordance with its mandate under resolution 1244 in order to preserve security. Colomina confirmed that “the presence of KFOR was of the utmost importance for guaranteeing security throughout Kosovo, and that KFOR was ready to intervene in case the stability was jeopardized, in accordance with the UN SC Resolution 1244,” as emphasized in the statement by the Ministry of Defense.

Ivica Dačić hosted the Deputy Assistant Secretary General at the Ministry of Foreign Affairs, where they discussed the security situation in Kosovo, possibilities for improving cooperation between Serbia and NATO, and current security problems in Europe.

“Both sides expressed satisfaction with the achieved level of political dialogue and partnership cooperation between Serbia and NATO on issues of common interest, with the aim of preserving peace and stability in the region” the MFA statement concluded.

However, in a statement to Beta, Colomina warned that the current political circumstances in the context of the war in Ukraine make it difficult to understand Belgrade’s stance towards Moscow, as many members of the Alliance have pointed out, and that the level of political cooperation between Serbia and NATO could be threatened if this balancing act continues.

Following his Belgrade visit, Colomina traveled to Sarajevo, where he met with the Chairman of the BiH Presidency, Šefik Džaferović, who thanked NATO for the support it provides to Bosnia and Herzegovina in on its path to Euro-Atlantic integration. Colomina and Džaferović discussed the current situation in the country, as well as the importance of the cooperation of the Armed Forces of Bosnia and Herzegovina with NATO, which was emphasized at the recently held NATO summit in Madrid, where Bosnia and Herzegovina participated as a partner.

Colomina expressed his satisfaction regarding the renewal of EUFOR’s mandate and the Althea mission in Bosnia and Herzegovina and added that NATO will continue to support the mission in accordance with its mandate under the Berlin Plus arrangements. He also welcomed the decision of the Council of Ministers to adopt the Reform Programs for 2021 and 2022, key documents for the country’s cooperation with NATO.

“Chairman Džaferović emphasized that the Euro-Atlantic path of Bosnia and Herzegovina is important for enabling the reforms needed by our country and its citizens, which will help create a more stable and secure environment and the country’s future,” as the statement by Presidency of BiH pointed out.

In Sarajevo, Colomina also met with Josip Brkić, Deputy Minister of Foreign Affairs of BiH and Chairman of the Commission for Cooperation with NATO. The importance of the reform program was once again highlighted. According to Brkić, the reform program confirms “the ability of the institutions of Bosnia and Herzegovina to fulfill their obligations on the way to NATO because it is a document that represents the political and legal framework of cooperation between our country and NATO,” as stated in the announcement of the Ministry of Foreign Affairs of Bosnia and Herzegovina.

At the meeting, Colomina emphasized the importance of the European Commission’s proposal for BiH to receive the status of a candidate country, as well as that NATO will continue to support BiH in the reform process.

“During the meeting, he pointed out that due to its strategic importance, NATO continues its dedication, assistance and commitment to BiH and the Western Balkans region, which will be discussed more at the meeting of the North Atlantic Council (NAC) at the level of foreign ministers in Bucharest at the end of this month, in which Bosnia and Herzegovina has been invited to participate as a partner country,” the statement added.

During his visit to Sarajevo, Colomina once again emphasized the support that NATO provides to BiH in interview for N1, but also added that the pace of Euro-Atlantic integration will depend on internal processes. He also referred to specific NATO assistance programs for strengthening the capacities of BiH’s security institutions, such as the package for building defense capacities, which he hopes will be approved in February 2023.

Mogherini, Hahn on Albanian elections: Continuation of justice reform to be of particular importance